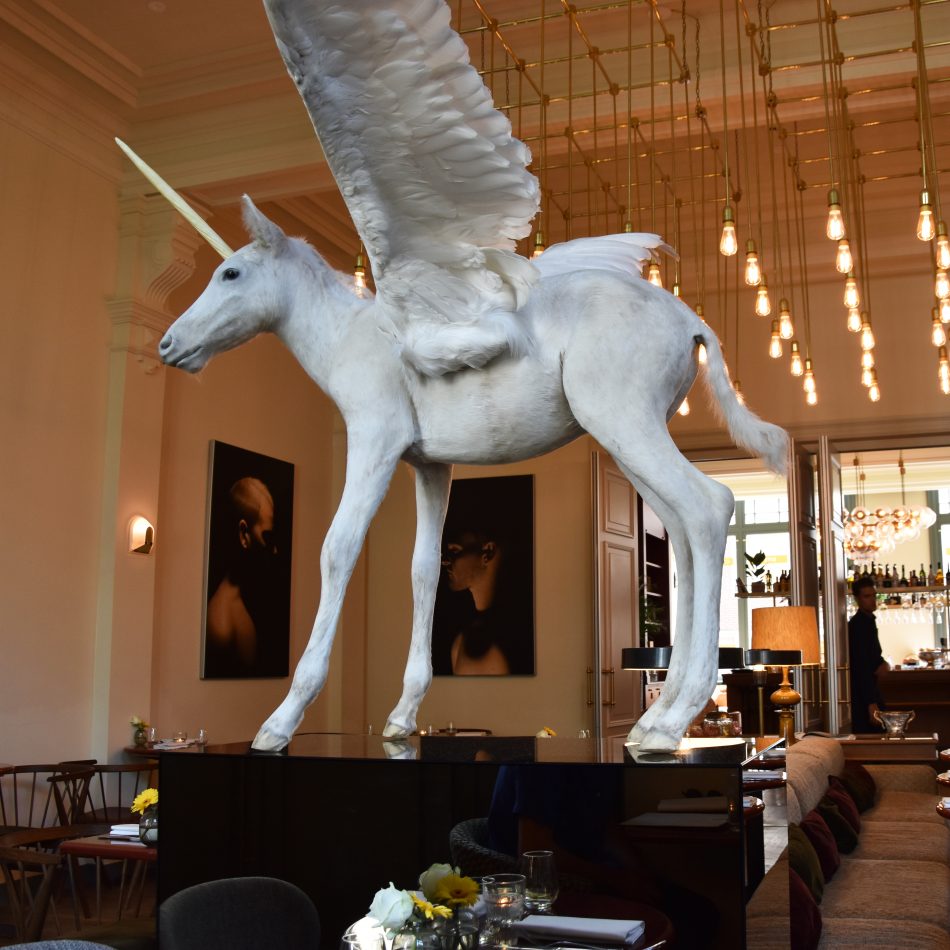 I had lunch at Cafe Ons Huis in Amsterdam, and even though the name ‘Our House’ and the neighborhood (Jordaan) might make it seem like an old small cafe, it’s actually one of the hippest hotspots in the city center of Amsterdam.
I wanted to go to Cafe Ons Huis merely for the unicorn, but it turned out that besides the beautiful interior they have some delicious dishes on the lunch menu too.

You can find Cafe Ons Huis in Hotel Mercier on the Rozenstraat. It’s just around the corner of the Rozengracht and Prinsengracht in the Jordaan neighborhood in Amsterdam. Ons Huis is part of a collective of restaurants and hotels from Vondel Hotels, just like Restaurant JOOST.
They’re called Ons Huis as the building used to be a community center called Ons Huis. And they want to be the living room of the Jordaan, so a name that refers to a home is a great way to start.

At Ons Huis they work with the Dutch Cuisine concept, which means they work with local and seasonal products as much as possible. Ons Huis also puts an emphasis on vegetables. So besides being one of Amsterdams most Instagrammable restaurants, they also serve great food.
They’re open for breakfast, lunch and dinner and I went there for a healthy lunch.

There are quite a few dishes with meat and fish on the menu despite their desire to put an emphasis on vegetables. But there’s a vegetarian dish in every category on heir menu, so you’ll have some options as a vegetarian. My friend went for the tuna broth with oyster mushrooms, cucumber and lemon grass and a deluxe tosti (grilled cheese sandwich) with mozzarella, ham and truffle cream.

I went for a healthy vegetarian lunch salad with cabbage lettuce, apple, chili pepper, green asparagus and raisins.
They also have a vegetarian pearl barley ‘risotto’ with carrots and macadamia nuts.
And they’ve got all kinds of sweets from their bakery like a croissant, Dutch pancake and French toast.

Click here to reserve your table at Cafe Ons Huis in Amsterdam.