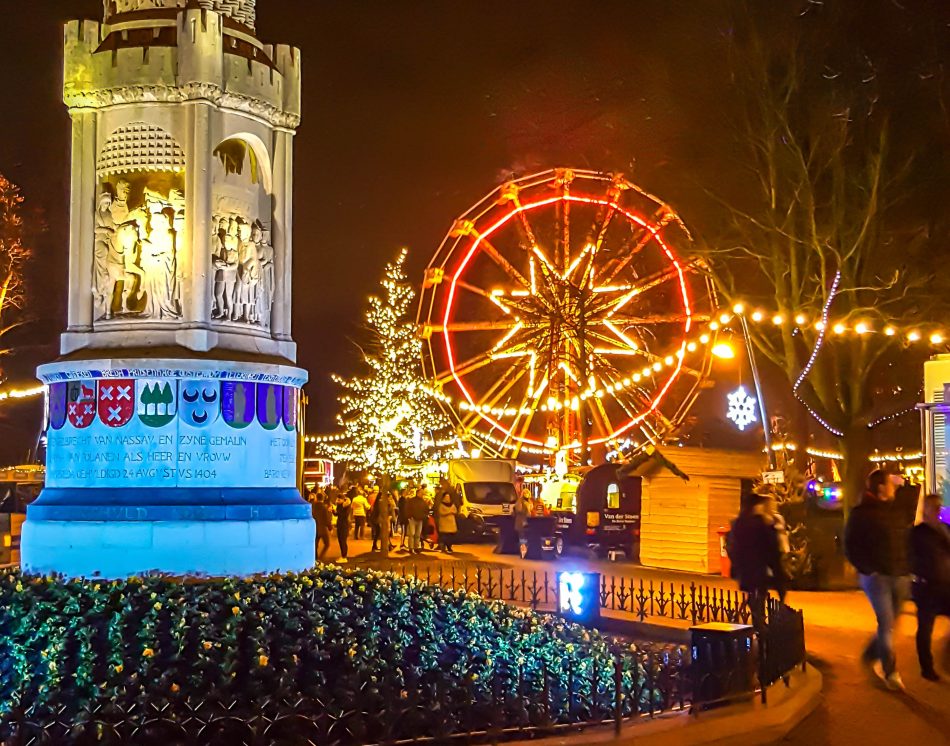 Yesterday was the start of Betoverend Breda, a magical winter event in the city Breda in Brabant. I was there for the opening and I’d love to tell you all about it and show you some pictures of this winter wonderland.
At the Grote Markt (the big market square) there’s an 11 meters high Christmas Tree and at the opening yesterday they also lit the tree.
It was quite busy and really nice to see that many locals had gathered to witness the start of the event. The mayor of Breda pushed the button to light the Christmas Tree. When he pushed the button, we heard the voice of ‘Kareltje’ who lives underneath the market square. He told a story about the history of Breda and while we heard the story, we saw all kinds of special effects on the tree. At the end of his story the Christmas tree was beautifully lit. The colors of the illumination change regularly, so it’s always nice to walk by and see the tree changing. After the Christmas tree was lit, there was a great performance of the ZO! Gospel choir. Their happy songs made me instantly happy and there were many talented singers. After that it was time for the performance that most of the visitors came to see: Voice of Holland winner Maan. I was impressed with how well she could sing despite the cold! For the die-hards there was also a big band performing afterwards, but we warmed up with a cup of glühwein in a bar at the market square.

You can visit Betoverend Breda from now until January 6. There are all kinds of sights and events happening in the afternoon and evenings this month. There’s an ice cream rink installed especially for Betoverend Breda right next to the Christmas tree. Besides regular ice skating there are also special events planned on the ice skating rink; like ice skating with candle light and a disco party on ice.