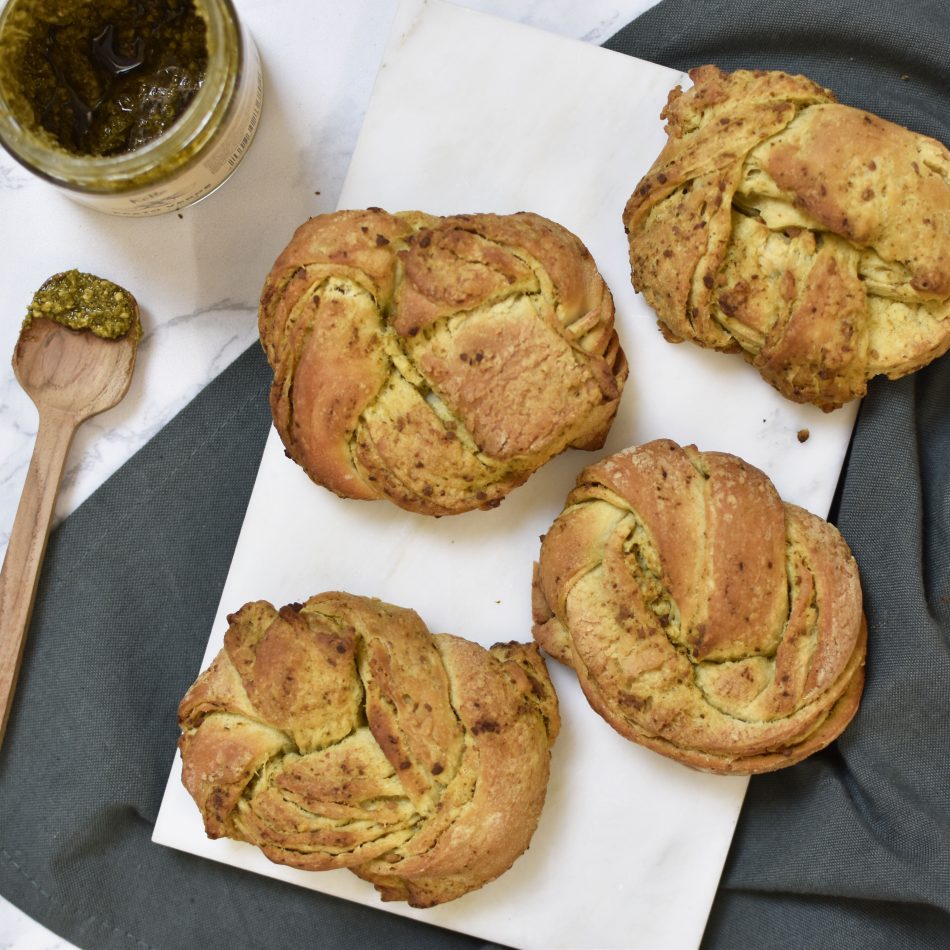 I made vegan pesto buns! On this page I’m sharing the recipe of these vegan bread rolls with pesto.
These pesto buns make a great snack or starter. I made knots from the dough, just like I did with my vegan cinnamon knots. But you can of course make these buns in any shape you like.

Put the almond milk, yeast and sugar in a bowl. Stir and leave for around 10 minutes.
Put the flour in a mixing bowl with the olive oil and salt. Add the almond milk mixture. Mix for 6-8 minutes.
Form a ball from the dough and put it in a greased bowl. Cover with cling film or a clean towel and let it rise at room temperature for 45 minutes.
Mix the green pesto with the margarine.
Put the dough on a floured surface, use a rolling pin to form a large rectangle.
Spread the rectangle with the pesto-margarine mixture.
Imagine that the dough is divided in three smaller rectangles lengthwise. Take the left side of the dough and flip the dough over the middle rectangle.  Fold the right part of the dough over the middle.
Use a rolling pin to make the dough a bit thinner widthwise.
Cut the dough in 2cm wide strips widthwise. Leave one end of the strip attached and cut the remaining part in half with a sharp knife.
Twist the two halves around each other. Carefully stretch out the braid a bit.
Wrap the strip around 3 fingers twice, then stretch the remaining dough over the formed circles and tuck the last part underneath. Put the pesto knots on a parchment lined baking tray, press them down a bit flatter, cover them and let them rise for 45 more minutes.
Preheat the oven to 180 degrees. Bake the buns in 25-30 minutes until golden brown.