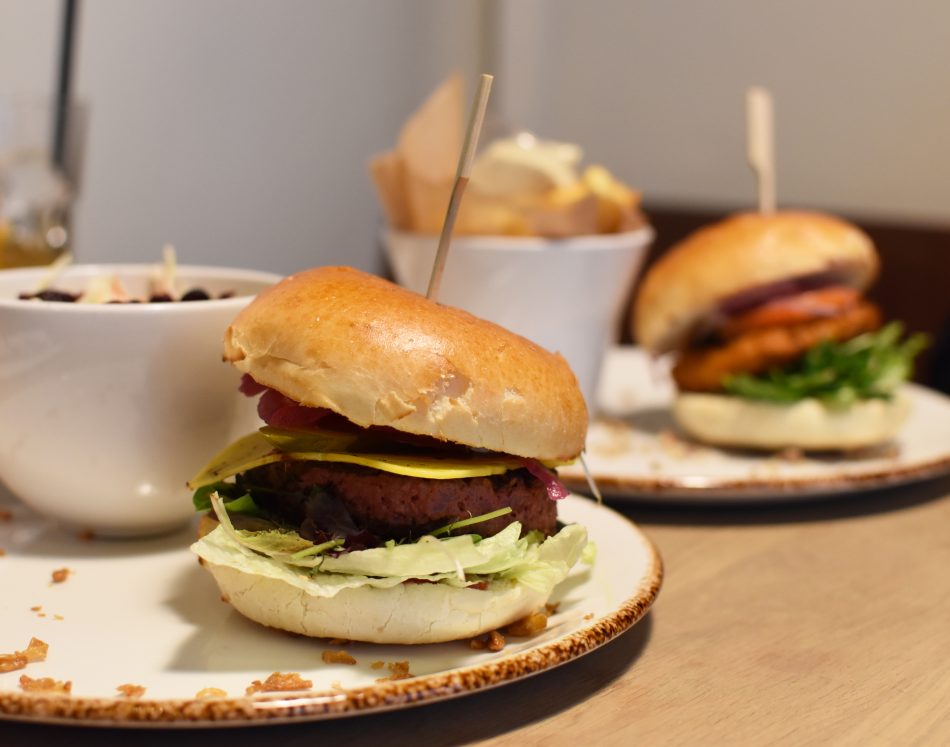 Ellis Gourmet Burger has restaurants in France, Belgium and the Netherlands. In the Netherlands you can find them in Breda, Rotterdam, Utrecht and Amsterdam. In Amsterdam they have 3 locations, all in the city center of Amsterdam.
The Ellis at the Prinsengracht is close to concert venues Melkweg and Paradiso, so it’s a great spot for a pre-concert burger. The restaurants at Singel and Gravenstraat are both close to Amsterdam Central station and the Dam, so they make a perfect lunch spot when you’re shopping in the city centre or dinner after a day of sightseeing. Pictured is the restaurant in de Gravenstraat.

On the menu of Ellis Gourmet Burger you can find 10 different burgers and a seasonal burger that changes every month. There are two vegetarian burgers on the menu. Pictured you see the Crazy Red Veggie. It’s a red pepper and soy burger with baby spinach leaves, rocket, pecan nuts and lime mayonnaise. It’s created by Paul Florizoone, the owner of Greenway; a vegetarian brand and chain of restaurants in Belgium.

There’s also a vegan burger on the menu of Ellis Gourmet Burger. The patty is from Beyond Meat. Ever since I first tried the Beyond Meat Burger in the Netherlands, I’m a big fan! This patty looks and tastes just like real meat but it’s completely plant-based. It’s served with vegan cheese, tomatoes, pickled onions and lettuce. The burger normally comes with a different bun, but I requested for the brioche bun. Please note that the brioche bun isn’t vegan, so stick with the bun that normally comes with the Beyond Burger if you want a 100% vegan burger.