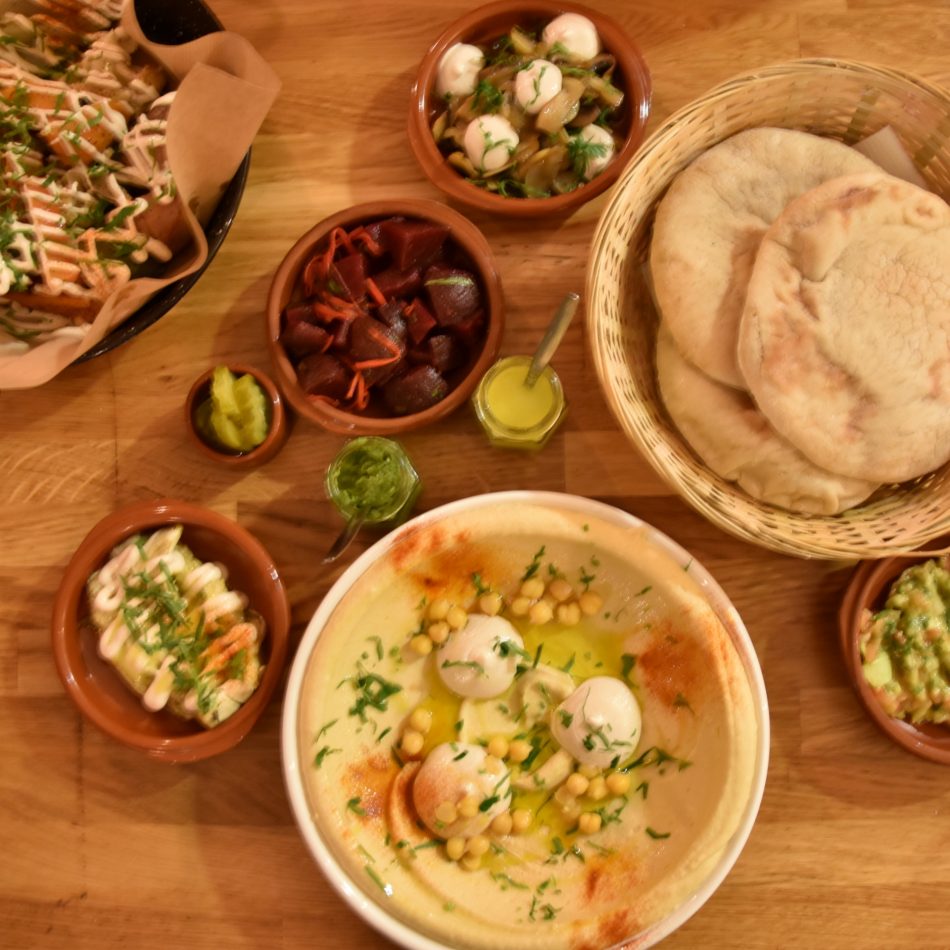 I’m a huge hummus fan, you can also see my hummus recipes on my foodie page or read about my trip to Israel on my travel page. Sometimes I make it myself, often I buy it (I eat it for lunch pretty much every day) and occasionally I go to a hummus restaurant. Luckily Amsterdam also has no less than three great hummus restaurants and two Middle Eastern cuisine restaurants that also have good hummus. So there’s plenty of choice for hummus lovers in Amsterdam! You’ve got Sir Hummus in the nice area called ‘De Pijp’.
Sir Hummus is run by 3 Israeli’s and they make real authentic hummus. You can choose between a big or small portion, white or whole wheat pita’s and they have optional toppings like beef or aubergine. You can also buy your hummus and pita bread ‘to go’. In the Jordaan area there’s Hummus Bistro D&A, where they don’t only have hummus but also serve baba ganoush (eggplant dip), shakshuka and labane (yogurt cheese). Their whole wheat pita’s are the best, nice and fluffy. De hummus house sells hummus with a choice of toppings, several main dishes like shakshuka and they have several middle eastern style tappas. The best thing to do is to order a few things with your company so you can taste a bit over everything.

Besides these three hummus restaurants there are also two restaurants in Amsterdam serving nice Middle Eastern food, including hummus. You’ve got Mana Mana. At Mana Mana they’ve got great hummus, falafel or vegetable dishes served with pita bread. And they’re willing to cook vegan for you! All dishes are made to share, so you can just pick around 2 dishes per person and see how your table gets filled with delicious vegetarian dishes. I recommend the baba ganoush and of course this pretty and tasty falafel dish. In the Foodhallen in Amsterdam you’ve got several food stands and one of them is Maza. Maza is a brand that sells hummus in the Netherlands and at their stand they sell all kinds of Middle Eastern dishes. They serve great vegetarian food like falafel and hummus. They have a falafel wrap, but you can also order a platter with pita bread and several dips.