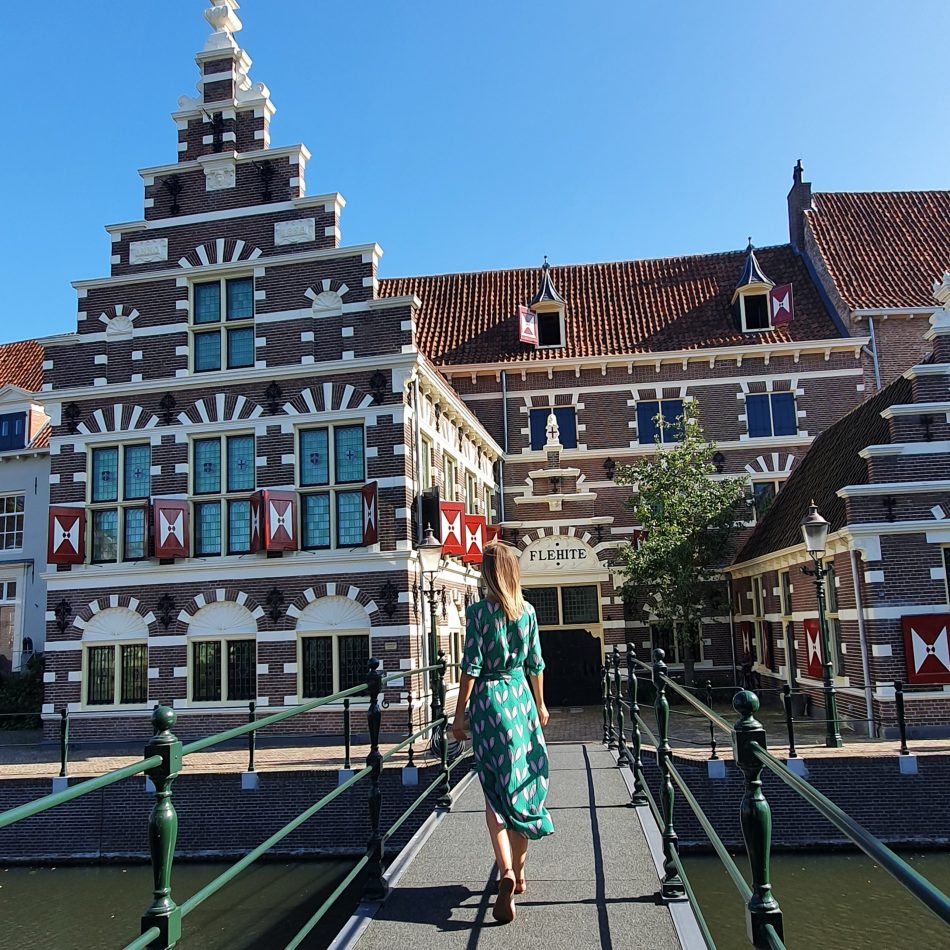 Amersfoort is a lovely city in the province Utrecht in the Netherlands. As an Instagrammer, it was a heaven for me to walk around in. There were so many Instagrammable houses and streets in Amersfoort! I decided to make a list with the top Instagram spots in Amersfoort. You can use this page when you’re visiting Amersfoort to take some great photos for your Instagram account but it’s also a nice list if you’re not on Instagram, as these spots are the most photogenic places in Amersfoort.

Did you know that Piet Mondriaan, the famous Dutch De Stijl painter, was born in Amersfoort? The painter later lived in Paris, London and New York and was famous around the world for his abstract style, geometric elements and primary colors. It’s no surprise that Amersfoort is proud of him! In the house where he was born you can now find a museum called the Mondriaanhuis. Here you see the story of his life. His early work is on display, they re-created a life-size copy of his apartment in Paris and there’s a video installation that combines his work, his love for New York and his passion for jazz music in one experience. The latter makes for some great Instagram pictures as the whole room is filled with the typical Mondriaan lines and colors. Tickets are €12 and can be bought online beforehand.

Tinnenburg is a monumental house. It was probably already build in 1300 or 1400. It’s a high building, that’s beautiful from the front or the back that you see here. It’s very close to the Mondriaan house mentioned above.

Amersfoort has many Instagrammable streets but one of the top Instagram spots in Amersfoort is the Muurhuizen street. The street is lined with old houses with cute shutters and plants.

All around the historic city centre of Amersfoort you’ve got a canal. The street name changes a few times, but at the spot where we took this picture it’s called Zuidsingel. It’s on the South side of the city center.

This beautiful house is called the House with the purple windows. You don’t see it very well on the picture, but it indeed has purple windows. The house was bought in 1780 by a Jewish tobacco trader and banker. At the moment it’s a monument and only open one day a year on Open Monument day.

Marienhof is a 500 year old building. It was originally build as a monastery and for a long period of time it was used as an orphanage. At the moment the beautiful premises is used as a party and event center.

The Monnikendampoort is one of the gates from the old city walls. From this gate with its bridge, the water flowed into the city. Nowadays you can find a restaurant in the gate.

Another pretty old gate in the center of Amersfoort: the Kamperbinnenpoort. You can find it at the North-East side of the old city center. The gate was part of the first city wall and is one of the oldest remaining parts of Amersfoort.

Liefde & Ambacht (Love & Craft) has several cheese shops in the Netherlands. From Amsterdam to Leiden. But the shop in Amersfoort is one of the most Instagrammable ones! I loved the old building, the cheese out front and the canopy above the entrance and window.

When you’re entering restaurant Dikke Dirck in Amersfoort you don’t know where to look. The restaurant has three floors and every corner of every floor is a wonderful Instagram spot. Every floor has its own vibe to it. From a colourful fairytale on the ground floor to retro on the second floor and romantic on the third floor.

Isn’t this a beautiful house? It’s one of my favourite houses in Amersfoort and it’s so picturesque. And there’s a surprise in this house: it houses a bed and breakfast! It’s a great B&B to stay in during your time in Amersfoort as it’s right in the city center and in one of the most beautiful buildings of the city.

The Museum Flehite is housed in a beautiful building. Or actually it’s originally 3 buildings, build in the late middle ages. I love the brown and white stones and the red and white window shutters. The best Instagram spot is on the bridge that leads to the museum if you ask me.

This house at the Grote Spui street, right behind the Koppelpoort is just one of the many examples of an Instagrammable house in Amersfoort. It almost looks like the houses in Amersfoort were build for Instagram!

De Koppelpoort is probably the most photographed spot of Amersfoort. And I can’t blame everyone. It’s a beautiful gate. It’s also beautiful illuminated when it’s dark, so it’s definitely worth coming there during the evening as well.

There’s a little secret hidden in Amersfoort. A chandelier! You can find it underneath a bridge close to the famous Koppelpoort. I thought it was a wonderful little gift that’s hidden in the city.

The Eemland Library is one of my personal favorite Instagram spots in Amersfoort. Also because I love libraries and book stores in general. I can walk around books for hours. But the Eemland library in Amersfoort takes the experience a step further with this futuristic design, an aluminium roof and different terraces where you can read and work.

De Nieuwe Stad (The New City) is located a bit North West of the old city center of Amersfoort. It’s a creative area where local companies and start-ups are housed. You can find some cool public art and graffiti here as well as several creative initiatives focusing on sustainability.

The ‘Wagenwerkplaats’ is an urban area, to the West of the city center of Amersfoort. Located right behind the train tracks. The area opened in 1904 as a place where freight wagons were maintained. Nowadays there are different offices located in the former factory buildings. There’s some great street-art that you can find in this area, which will look great on your Instagram account!
One of the coolest spots at the Wagenwerkplaats area is the Centraal Ketelhuis. This building houses a great restaurant and there are also several rooms that you can hire for weddings and other parties.

Vintage Friends is a second-hand shop in the neighborhood called Isselt in Amersfoort. You can find it North-West of the city center. It’s located in an old warehouse and there are 10 vintage shops located in the big space. You can find all kinds of things here, like vinyl, industrial furniture and pre-loved fashion. And I thought it was a great Instagram spot with the stairs in the middle and the ‘Vintage’ light sign.

Looking for an Instagrammable hotel to spend the night in Amersfoort? I recommend Hotel Mercure Amersfoort.