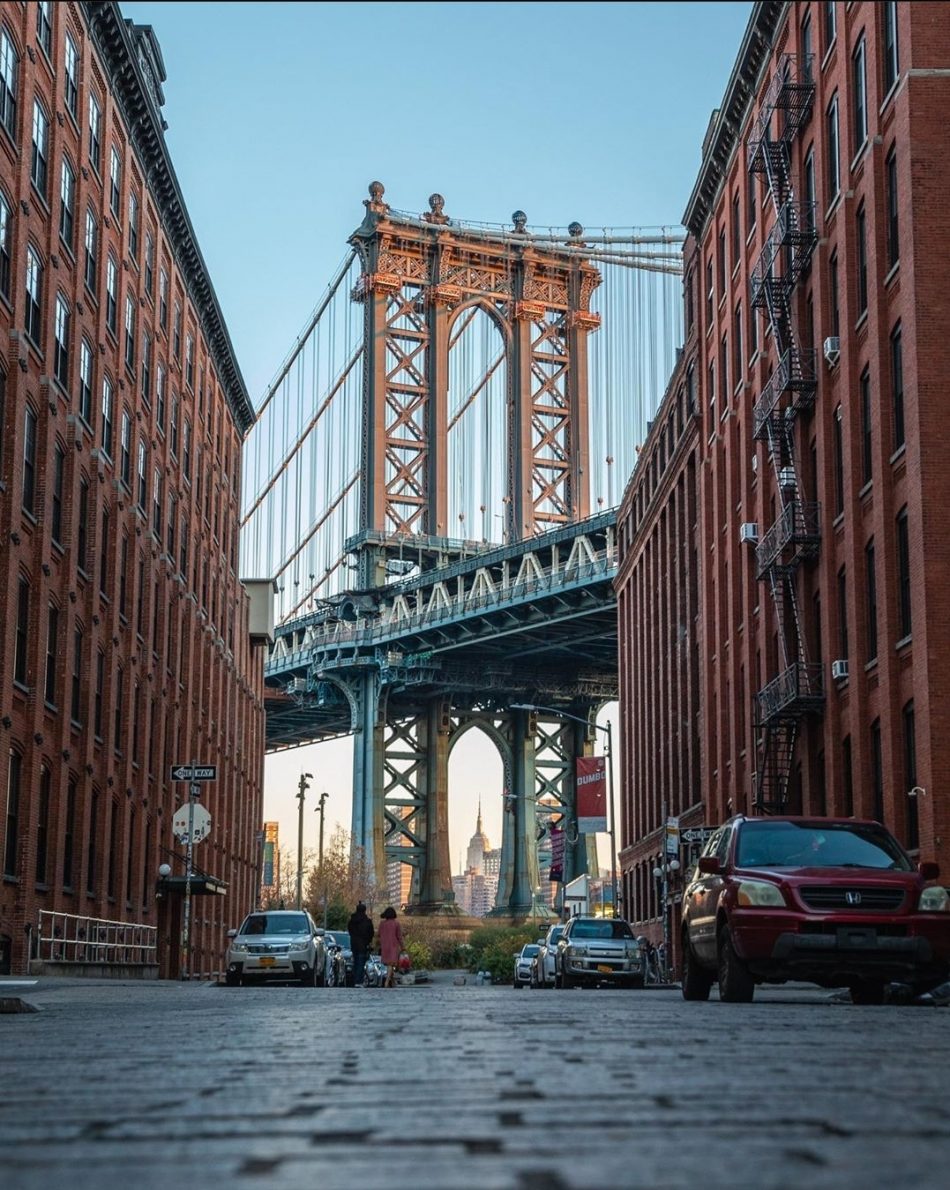 This must be the most Instagrammed spot in New York right now. This street can be found in the neighborhood DUMBO in Brooklyn. You can find it close to the Brooklyn Bridge. If you come from the bridge, just turn left when you enter Brooklyn and you’ll automatically walk into the street. The street is called Washington Street. You can see the Manhattan Bridge in the background. The spot is so popular with Instagrammers that it’ll be very difficult to take a picture without any other people on it. Perhaps when it’s really early or when it rains.

The Vessel seems to have been made just for Instagram. There’s no other purpose than nice views and pretty Instagram pictures. The spiral staircase is very photogenic when you’re on one of the stairs, but it’s also a great picture when you’re on the ground. You can visit The Vessel for free, but to avoid long lines in busy periods you can get your tickets for a certain time slot for free here.

The Oculus building is located at the World Trade Center site. It’s the subway and PATH stations Fulton Street and WTC. It’s also accessible if you didn’t take a metro ride and there are also quite a few shops located inside.

Stone Street is often referred to the oldest street of New York City. Especially in the early evening it’s very Instagrammable. The cobblestoned street, the colorful bars on both sides and the lights across the street make a great Instagram picture.

Right around the corner from Stone Street you’ll find steak restaurant Delmonico’s. The restaurant has been around since 1837, mainly focussing on prime beef. As a vegetarian, I didn’t went in; but as an Instagrammer I loved the exterior. The address is 56 Beaver Street and you get the best picture right across the entrance.

Holiday vibe on @juniorscheesecake 🔥This is their recent landmark additions–in the heart of the theater district on Broadway in Times Square👇 – Since the 1950’s, Junior’s has been famous for great food, great fun, great service, and their BEST cheesecake in NYC🍰With a full menu ranging from steaks to seafood and sandwiches to salads and cheesecake, a fabulous dining experience will be guaranteed for sure!😋👌#eatwithmonica

Junior’s Restaurant in Manhattan is a great picture to capture the ‘bright lights, big city’ feeling of NYC. This restaurant is located in Midtown Manhatten, close to Times Square.
They also serve some very Instagrammable milkshakes topped with cheesecake at Junior’s Restaurant.

The Morgan Library & Museum is lesser known than the big museums like the Moma and the MET, but it’s at least as Instagrammable. The library started by JP Morgan has some impressive works in its collection. The notes from Napoleon when he took English lessons for example. But apart from the impressive literature collection, The Morgan also has one beautiful Instagram location: Mr Morgan’s Library. You can find this room on the ground floor. Go straight after the entrance and keep right.
The Morgan Library & Museum is located on Madison Avenue between 36th and 37th street.

The first Eataly opened up near the Flatiron building, but this new location Downtown right next to the World Trade Center is also a great spot. With the paper grapevines, I thought it makes a great Instagram picture. Eataly (a great combination of the words Eat and Italy) is a market meets deli meets restaurant, all focussed on Italian food. There’s free wifi, so you can upload your picture on Instagram straight away.

Brookfield Place is a relatively new business and shopping area close to the World Trade Center. The entrance at the side of the Hudson river has a glasshouse look with big palm trees. Black and white with a touch of green always looks great on your Instagram feed!

Albanase Meats & Poultry in Elizabeth street in SoHo has such an Instagrammable store front. The family-owned butcher shop has been around for almost a century. When I was there, it didn’t seem to be open as a butcher anymore, but the storefront was still picturesque with woolen sausages in the window.

Bar Sisters in Brooklyn has a very Instagrammable exterior. They’re open for breakfast, lunch, dinner and evening drinks. They often invite dj’s and serve delicious cocktails in the evenings.

The New York Public Library, right next to Bryant Park in Midtown has a very photogenic main hall. On the many tables you’ll find all kinds of people studying and researching. Want to take a picture without many people on it? Go close to opening or closing time.

Freemans has one of the most Instagrammable restaurant exteriors of New York. A small alley covered with graffiti and sticker art leads up to this corner with many plants and a bright blue facade.

NoMo SoHo is a hotel and restaurant in the SoHo neighborhood. Where ‘SoHo’ stands for ‘South of Houston street’, ‘NoMo’ stands for ‘Nostalgic and Modern’. The entrance path with its plants is very Instagrammable. The rooms are mostly white with a touch of blue and the industrial restaurant serves great food all day long.

Ever After, the children’s clothing shop in Tribeca has a very Instagrammable store front. The industrial exterior with the floral decorations make a great Instagram picture.

Are you going to New York for the first time? Click here for all Top Sights in New York.