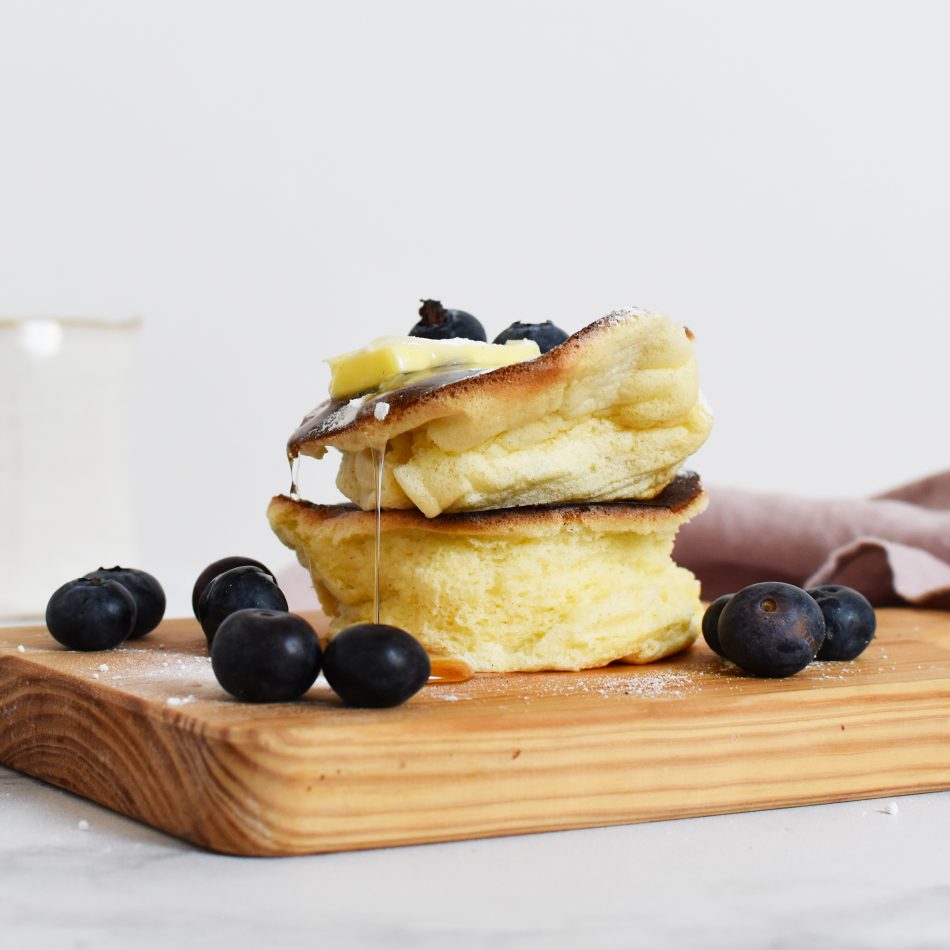 You might have seen them on Instagram, these thick and fluffy pancakes. They’re Japanese Souffle Pancakes. These pancakes are soft and spongy and they make a great breakfast or brunch dish. When I was in Japan I noticed how popular they were, but I always thought they were difficult to make so I never wrote a recipe on my blog. But after trying a few ways to make them, I think I created the perfect recipe for Japanese Souffle pancakes. I’m sharing the recipe with you on this page!

The name Souffle Pancakes comes from the French soufflé dish. A souffle is a baked egg-based dish, that rises in the oven. It gets the same height as these pancakes, hence the name.
These fluffy souffle pancakes are very popular in Japan, but don’t confuse them with a ‘Japanese Pancake’ as that’s the English name for Okonomiyaki, which is a savory pancake that you can have for lunch or dinner. You can see a picture of Okonomyaki on my food blog on Kyoto, where I tasted it.
These Japanase Souffle Pancakes aren’t savory but sweet, and perfect with a bit of butter and/or a drizzle of honey or maple syrup.

After the experiments I did, I would say that this is the most easy and fool-proof Japanese Souffle Pancake recipe. The most difficult thing is to get the souffle pancakes high enough. The first time I made them, the batter just went flat when I put it in the pan. And although it was higher than a regular pancake, it wasn’t as thick as I wanted it to be. The secret that I discovered to getting thick Japanese pancakes is by making them with a cooking ring. You can use a store-bought cooking ring, but you can also create one yourself with aluminium-foil.
Put a strip of parchment paper on the inside, so that the pancake doesn’t get stuck to the ring. And voila: you’ll get thick Japanese souffle pancakes!

Put one egg yolk in a bowl (you won’t need the other one) and put the two egg whites in an other bowl.
Add 0.5 tablespoon sugar to the egg yolk and whisk. Add the milk, flour and baking powder and whisk until combined.

Line 2 cooking rings with parchment paper. Warm a bit of coconut oil in a baking pan (you don’t want it to be too greasy). Put the cooking rings in the pan and divide the batter over the two rings.
Cover with the lid and bake on low fire for 6 minutes. Use a spatula to flip them around and bake for 5 more minutes.
Serve them with toppings of your choice like powdered sugar, butter or maple syrup.

Like pancakes? Check out my recipe for Oreo pancakes.