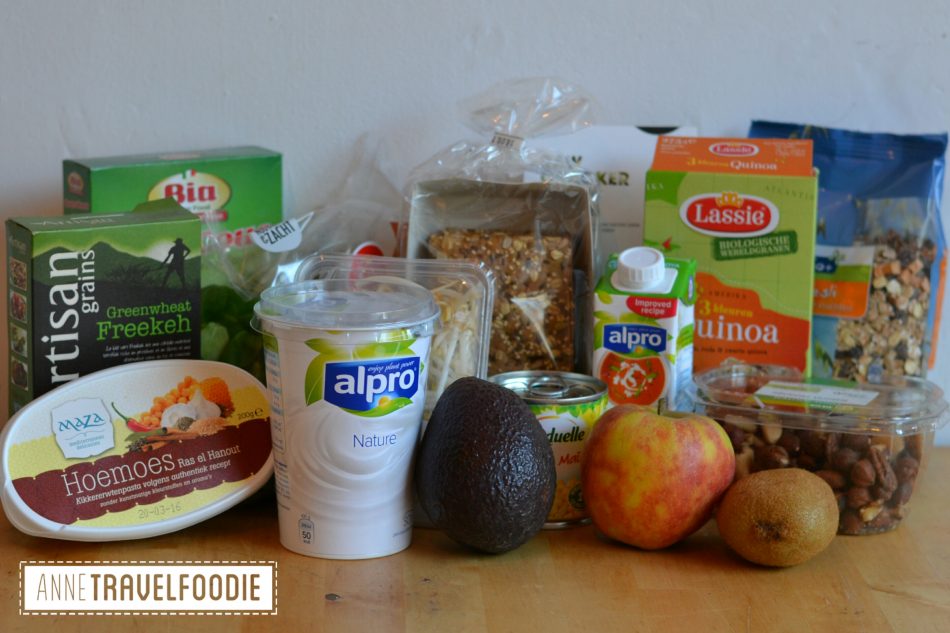 I did it! I completed my vegan challenge! From March 15 to April 15 I ate 100% vegetarian and 80% vegan.
Do you want to know why I did it, how it went or are you looking for some vegan inspiration? Read all about it in this blog post! After seeing Cowspiracy I felt like something needs to change. The effect of livestock on our planet is just too big. I was already aware of the health benefits of skipping meat but this documentary made me even
more aware of all the downsides of eating meat and dairy (for the planet, for the animals and for your body).

I was already practically a vegetarian, so I think skipping the meat will be quite easy. But, even though I’m a real veggie-lover, it might be difficult for me to go vegan. The main reason why I’m doing 80% dairy free instead of 100%, is that I would find it difficult to force others to eat vegan. So if we’re having dinner with friends or with my boyfriend in the weekend, I might eat dairy products. But whenever I have the choice, I’ll skip the dairy for a month.

Week 1
For breakfast I always have fresh fruit, muesli and yogurt. I always found it hard to switch to soy yogurt because that has added sugars and way more calories. And I was willing to go vegan, but I wanted to keep eating healthy. So this was a big dilemma for me. Until Alpro announced that they’re now selling unsweetened soy yogurt! Hurray! I bought 2 cartons straight away. By simply replacing my regular yogurt by plant based yogurt, I didn’t even have to change my breakfast that much. The unsweetened soy yogurt contains less sugar and calories than my normal cow milk skimmed yogurt. It does contain many ingredients, and in general I don’t like processed food. So I might have to consider alternatives to my yogurt-muesli breakfast. Lunch was easy. I already swapped my cheese sandwiches for hummus-avocado sandwiches months ago. So my lunch was already vegan. I’m a real avocado and hummus lover! If you haven’t tried this combination yet, you should really give it a go!
A colleague brought cookies to work this week. Normally I find it really difficult not to take one, even when I want to cut down on my sugars, I find them too tempting. But this time I had no problem with ignoring them!
What was also helpful was that BoxBites send me a box with vegan snacks. So I could easily bring a vegan snack with me to work. For dinner I made this beautiful salad this week. Colorful isn’t it? It’s quinoa with lettuce, tomatoes, avocado, bean sprouts and smoked almonds. Smoked almonds are a great discovery! They give you that extra ‘bite’ to your meal that you might miss because of the lack of meat and cheese.
I discovered a nice benefit of going dairy free; I couldn’t eat unhealthy chocolates for dessert! So I just ate some dates instead. So I’m doing good for the planet and my figure!
I found out that there are plenty of plant based options to get my proteins, but B12 is mostly found in animal products (and in Chlorella and Spirulina). So I bought a box of B12 vitamin tablets. Vitamin B12 is a nutrient that helps keep the blood cells healthy and helps make DNA. It also prevents you from feeling tired and weak.
And I don’t know if it’s because of these pills, or because of spring or because I’m doing well for the planet but I feel really great so far!

Week 2
So far my challenge is not so challenging. I have to admit that I’m allowing myself a bit of dairy in the weekends, so I had a piece of cake and an egg on Saturday. But apart from that, I’m eating plant based!
I’m lucky to live in a big city, there are many vegan options in Amsterdam when you go out for dinner. This week I went to SNCKBR where they had several vegan dishes, including this stuffed red bell pepper with bulgur. You can check my Amsterdam page for more healthy and vegan options in the capital city of the Netherlands. On Thursday I really felt like eating Mexican food, so I decided I wanted to try out a vegan Mexican dish. I made crunchy tofu. It tastes as if they’re fried, but they’re actually oven baked. I served them in tacos with lettuce, tomato and grated carrot. This dish is not only vegan, but gluten free as well. You can check the full recipe here.
I did have a guilty pleasure this week: dark chocolate! Most (extra) dark chocolate is vegan. Whereas my week was pretty healthy last week, this week I did satisfy my sweet tooth with some dark chocolate. But hey, it’s still vegan! 🙂

Week 3
I have to say, so far it’s going really well. I don’t feel like I’m denying myself anything, it doesn’t feel like I’m not allowed to eat things. I’m just choosing not to eat certain things. And those things are so bad for my body, the  environment and the animals that it feels really good saying no to them.
Last week I wanted to make a nice vegan Mexican dish, this week I was in an Italian mood! I love spinach and since it’s a great source for iron, I decided I wanted to make a vegan risotto with spinach. This was actually much easier than I though, you can just make your normal risotto recipe and skip the butter or cheese. If you want a ‘bite’, you can add some roasted pine nuts before serving. Who needs bacon when you’ve got pine nuts?
As a dessert I made vegan ‘Ferrero Rocher’, a real treat! Check the recipe here.
I have to admit that the second half of this 3rd week was a bit more challenging.
I was at an event where they served all kinds of small bites as dinner, and of course most of it wasn’t vegan. Since I’m allowing myself to eat dairy once or twice a week, it wasn’t a big problem. But I do have a lot of respect for people that eat 100% dairy free!

Week 4
This week I had dinner in a bar with friends. Almost everything on their menu contained meat or fish. They only had 2 vegetarian options: Parmesan cheese salad and cheese fondue! I was worried that I would be left with nothing to eat but lettuce. But I stepped over my shame and asked the waiter if the chef could make me a nice salad without meat. fish or cheese. And he did! The waiter returned with a beautiful salad with dried figs and apple crisps. Hurrah!
But later that week I had a bit of a low. I lost my inspiration and was craving for some cheese. Luckily there are so many  vegan dinner recipes online, I used Pinterest en Google and I found a nice recipe for couscous with grilled pumpkin and mushrooms. Even though it looked quite colorful, I found the taste a bit dull. I guess I need to think of some ingredients that I can add to a meal instead of cheese. The smoked almonds and roasted pine nuts I added earlier, worked well. But I’m on a mission to find other add ons! Already the last week of my vegan challenge! After I was lacking inspiration last week, I found many vegan recipes online. So this week I had plenty of nice recipes I could make!
The first one was this freekeh salad. If you’ve never tried freekeh; I really recommend it. You can read the recipe here. This whole grain wheat is super healthy. Freekeh has an incredibly high fiber content and is great source of protein for vegans. And I love how pretty and colorful this dish is! Speaking of colorful: I also made a vegan rainbow pizza! So much fun! I made a video in cooperation with Foodie Channel, you can check the DIY video on their YouTube channel.
I ended my vegan challenge with a recipe that I’ve found on Live Love Nourish, it’s a kale-quinoa salad with my new favorite ingredient: smoked almonds! Super easy to make and great for sunny days!

Now what?
Now that my challenge is over I don’t have a clear plan for the future. I didn’t miss meat at all, so I think I’ll continue to skip the meat. I’ll also keep on using plant based yogurt instead of regular yogurt for my breakfasts and I’ll also keep my lunches vegan. I don’t think I’ll go 100% vegan as I would find the transition too big for now. I will however really cut down on my cheese intake since I’ve found out the effect it has on our planet and on our bodies (cheese contains a lot of salt). I’m not sure how I feel about fish yet. Eating fish occasionally is good for your body, but it’s just really not sustainable. Maybe I shouldn’t eat it more than once a month and really check the packaging to see how sustainable it is.
So I guess the conclusion is that I’m  not going to eat 100% vegan, but I’m definitely more aware of what I put in my mouth and I’ll drastically lower my dairy intake.
Now if you can excuse me, I’m going to eat some vegan oreo cookies! 🙂