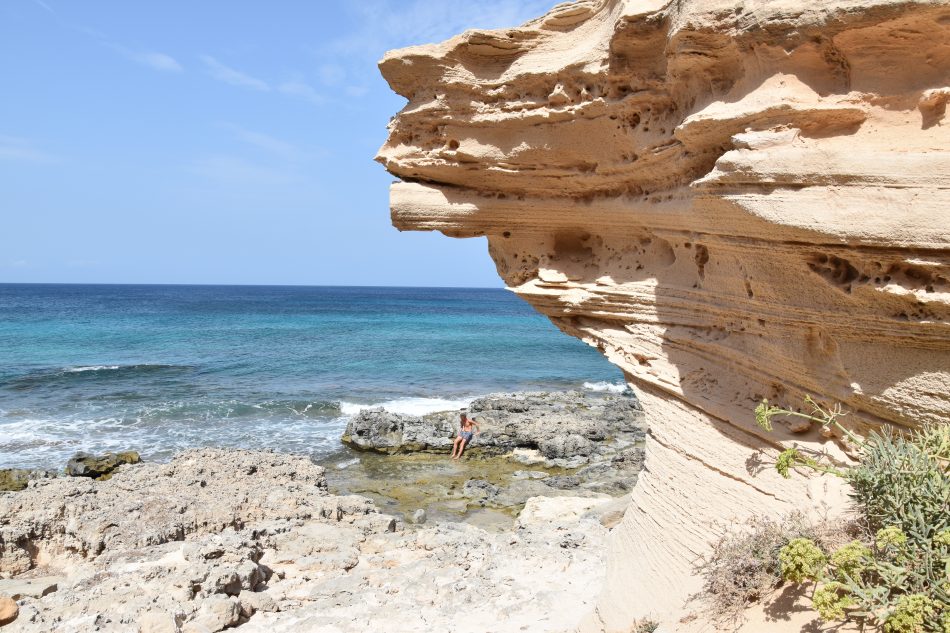 Platje de les Illetes has crystal clear water, it’s like you’re in the Caribbean. It’s on every list with the best beaches in Europe and even made the top 10 from best beaches in the world by Tripadvisor. And I can understand why, it’s also my favourite beach on Formentera.

I was very impressed by this beach. Cala en Baster is a cove with a beautiful rock formation on both sides. For me it’s one of the best beaches on Formentera. On one side the rocks have several big holes where you can get in the cave like hole and watch the view of the sea from there. It’s a great spot if you don’t mind some climbing and some nudity.

The longest beach of the island is around 7km long. The beach here has several names. Some parts are called after the location, some after a bar that’s located there. One of the nicest parts of this beach is Platja Es Arenals. You can easily park the car close by.

The beach of Platja de Migiorn is close to Platja Es Arenals. It’s on that same 7km strip but just a bit more Westwards. Beach bar Kiosko Ca Mari is a great spot for a refreshing drink or nice beach side lunch.

Es Pujols is as close to a touristic beach town as it gets in Formentera. But even here you won’t see big resorts. There are several souvenir and clothing shops. The beach from Es Pujols is very popular with (mainly Italian) tourists. It’s a small but nice cove. There are many Italian restaurants here, but I recommend Formentera family owned Sa Palmera or Can Vent for Spanish dishes.

Cala Saona is a beautiful cove with a sand beach and very clear waters. You can best navigate to Restaurant Sol Cala Saona, as that’s right at the beach.
If you have some time you can also go to Casetes Varador. The road leads you right to the top of the cliffs from where you’ve got a great view over Cala Saona.

The beach Platja des Copinyar can be found on the South West side of the island. It’s a popular long stretched beach. It has one of the best ‘Chiringuitos’ of the island: Bartolo. A Chiringuito is a small beach bar, often just with a couple of seats.

Estany d’Es Peix is a small bay in the North West of the island. I stayed at Hotel Lago Dorado during my time on Formentera and it was overlooking this bay. The bay has a great beach for families. As there’s no current and the water is shallow and warm, it’s perfect for kids to swim and play in.

Sant Augusti is a small fisherman’s town with a natural harbor for the fishing boats. It has several nice restaurants like Restaurant Can Rafalet. In the bay you can go swimming if the water is calm. Es Calo beach is just a few meters westward and worth a visit too.

Opposide side of Platje de les Illetes (the number one beach of this top 10) you can find Platja de Llevant. You can cross from one beach to another in just 1 minute. This beach is smaller and often windier. But it’s still worth to pay a visit, especially if you’re on the peninsula anyway.