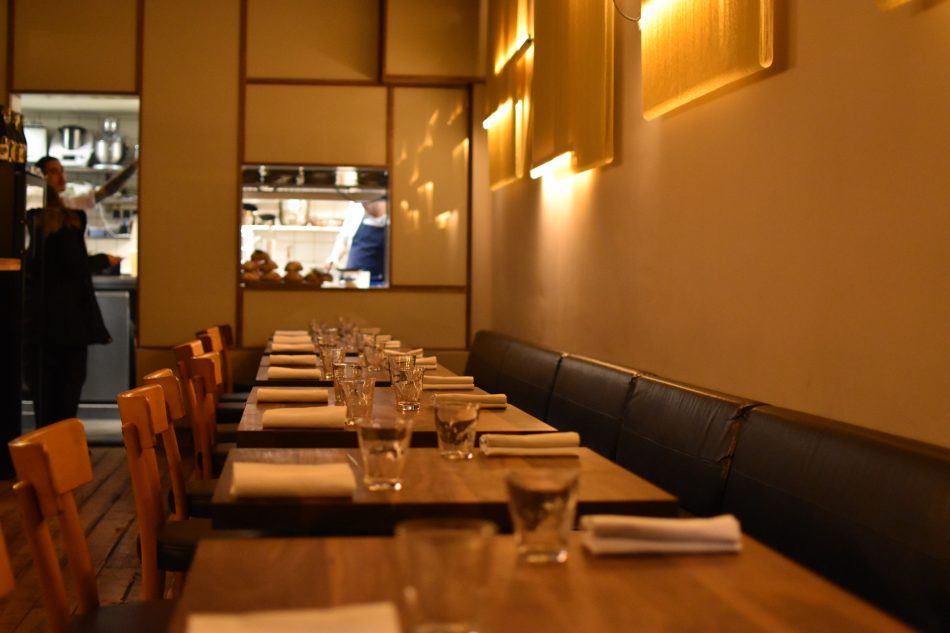 101 Gowrie is the Amsterdam restaurant owned by chef Alex Haupt, which you might know from the Netflix show The Final Table. The Final Table is probably Netflix most ambitious food show yet. Where in Chef’s Table there was one chef per episode, there are 12 pairs of chefs from all over the world competing witch each other in The Final Table. Each episode the duos have to prepare a staple dish from a country that they hear mere seconds before they have to prepare the dish. In the first episode for example, the chefs have to make tacos from Mexico.
One of the pairs competing in The Final Table is Ash Heeger and Alex Haupt. Ash Heeger runs her restaurant ‘Ash Restaurant’ in Cape Town, South Africa and when she was invited for the Netflix show she asked her colleague and friend Alex Haupt to be her partner. Alex grew up in Australia, has Japanese and German blood. He has lived and worked in London at one of the 50 best restaurants of the world: Dinner by Heston Blumenthal. Haupt has been living in Amsterdam since 2014, where he has worked at renowned restaurants Ron’s Gastrobar Oriental and Hoofdstad Brasserie of Hotel De L’Europe. Haupt opened restaurant 101 Gowrie in November 2018, in the same month when the first episode of Netflix’ The Final Table aired. No I have to say that I’m not your average foodie that watches all the cooking shows on tv, but when I heard one of the Final Table chefs opened up a restaurant in Amsterdam I got very curious. And when my friend Ces from Ceskitchen suggested we should go to 101 Gowrie after we met at the end celebration of Brabant Celebrates Food, I started binge-watching The Final Table straight away. When we visited 101 Gowrie, we were a bit star-struck by meeting the chef that we’ve been watching on tv. But the most important thing is that the food was really tasteful. And, also important for Dutch people, very reasonably priced considering the high quality.
101 Gowrie is named after the address in Australia where Alex Haupt grew up and where his parents still live. At his restaurant Haupt wants you to experience the same core values that were important in his parents house when it came to food: honest, thoughtful and delicious. The style of 101 Gowrie is ‘New Dutch Cuisine’, meaning that they use seasonal Dutch products and get inspiration from Dutch dishes but with a modern twist. Pictured you see the famous Dutch mini pancake called Poffertje but instead of pancake batter it’s made with potato and topped with barbecue mayonaise and buckwheat. They prefer locally sourced ingredients and have a established a strong relationship with farmers and producers in the Netherlands.
Als nice to know is that all the wines at 101 Gowrie are as natural as possible. My favorite white wine was the Screaming Betty, don’t forget to take a closer look at the label when you order it. Because they work with seasonal products at 101 Gowrie, the menu changes frequently. They work with a 5 course menu for dinner, although in reality you actually get 10 dishes. If you let them know in advance, the menu can be completely vegetarian. We accidentally forgot to mention it, as Ces made the reservation and I’m the vegetarian. So I’m very thankful that Alex and his team could still make a vegetarian menu for me!
The menu, with the appropriate name ‘Let us Feed You’, starts with 3 amuse-bouche. The mentioned Potato Poffertje is one of them (the non-vegetarian version comes with caviar from Eindhoven!). The other amuse bouche where North Sea Crab and ham and cheese ‘tosti’ for the non-vegetarians and a cracker with jalapeño cream and carrot and a tasty Jerusalem artichoke dish for me. Next up is the 101 Bread. At Gowrie the bread comes as it’s own course, and rightfully so considered the amount of work and devotion that has been put in it. The bread is home made and is a mix of white, spelt and rye grains. It’s served with cultured butter that is very creamy and, I have to warn you, very addictive. It’s hard not to eat too much of the bread and be too full to enjoy the other dishes. Maybe you’ll do a better job than I did resisting the bread. When my friends got a beautiful mackerel dish, I got a very tasty beetroot dish. After that we got a smoked mushroom dish with seaweed caramel served with chawanmushi, a Japanese egg dish. After all this food, it was time for the main dish. As opposed to the other dishes, you can choose your main dish. This month you could choose from Halibut and Venison. I got a vegetarian dish with celeriac, kombucha and coffee. I loved the plating of this dish. It looks like the ingredients where thrown on the plate and landed in .a very beautiful still-life.
All the dishes we had at 101 Gowrie had their own distinguished taste. You can tell that Alex Haupt has culinary influences from all over the world by the many flavors and different dishes and ingredients on the menu. Before we had the dessert, we had a pre-dessert. For a dessert lover like me, a pre-dessert is one of the best words in the world. The pre-dessert at 101 Gowrie was red grape and shiso shaved ice. A fruity and light small dish, perfect to neutralize your tastebuds after all the dishes and to get ready for dessert. Time for the dessert. We were the first ones to try out this new dessert that tasted as spectacular as it looked. It’s cacao with preserved blackcurrant and cepe, served with milk crisps. It was truly delicious and at this point I really wished I didn’t eat so much of the bread so I had more room to enjoy the dessert. And as if all these courses weren’t enough, you also get several sweets with your coffee or tea after dinner. Served in a ‘Delfts Blauw’ box we had cannelloni, chocolate truffles and biscuits with pumpkin cream.

The ‘Let us Feed you Menu’ from 101 Gowrie is priced at 58,-, which is a very reasonable price considering the amount and quality of the dishes. I can understand if you want to
reserve your table at 101 Gowrie straight away.

You can also have a look at my other favorite food spots in Amsterdam while you’re planning your visit to Gowrie.