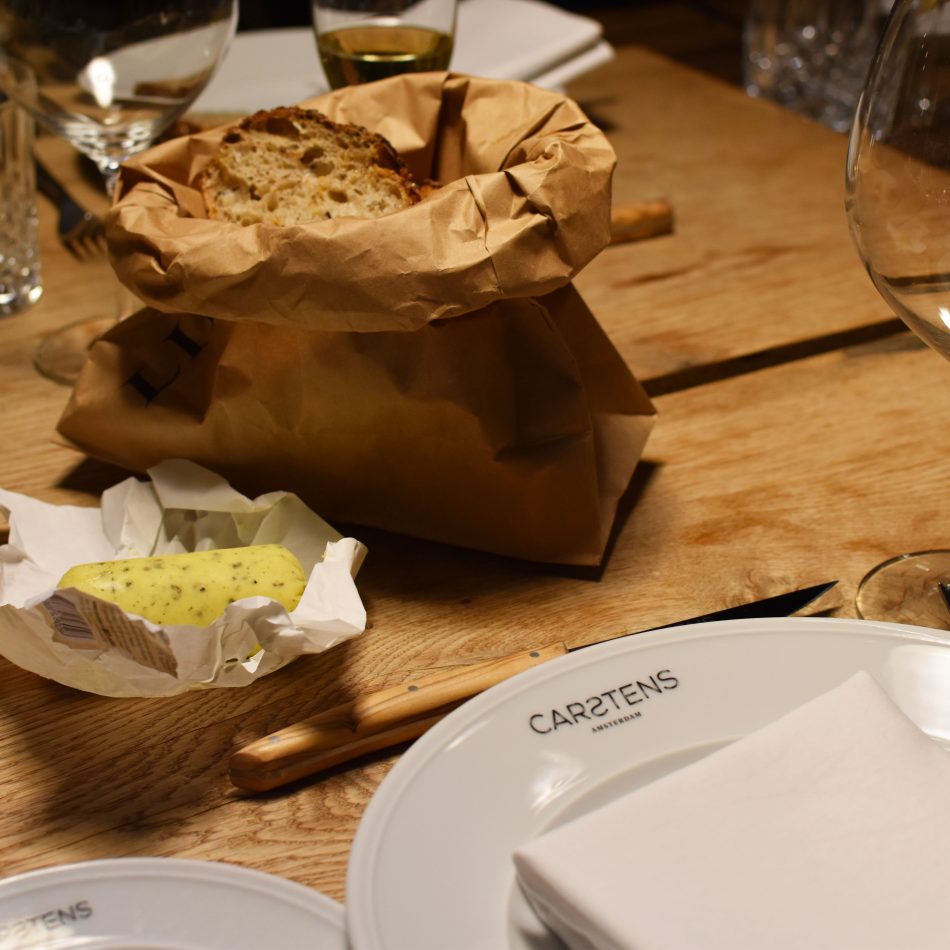 In the beginning of 2019 Brasserie Carstens will open up in Amsterdam and I already had a sneak preview. The restaurant will open at the Hasselaerssteeg, close to Amsterdam Central Station. And even though they don’t open for another few weeks, I already had a  preview. Together with other culinary journalists and foodies we tasted many dishes that’ll be on the menu and we heard more about the concept and the story behind Carstens.

The concept of Brasserie Carstens is developed by Maik Kuijpers. Maik has previously worked as the executive chef at Restaurant De Librije which has 3 Michelin stars. Kuijpers wanted to create a brasserie that is accessible to everyone. Not too fancy but a place where everyone can enjoy good food.
It’s not the first time that a chef from De Librije comes to Amsterdam to start something new. Sidney Schutte has done the same with Spectrum (formally known as Librije’s Zusje), Goldfinch and Café Cliché. Brasserie Carstens will open up in the Park Plaza Victoria Hotel opposite Amsterdams Central Station. Carstens will have its own entrance at the Hasselaerssteeg, between the Damrak and the Martelaarsgracht.
If you look at the Park Plaza Victoria Hotel you’ll notice that in the middle of the hotel building there’s still an old house. The owners of the house didn’t want to sell it to the hotel at the end of the 19th century, so the hotel build its way around it. There’s a book and a movie about this story called ‘Publieke Werken’. The family that used to live in the house was called Carstens, hence the name of the new restaurant. Brasserie Carstens will be managed by Timo van der Stad and Rick van der Meij will be the executive chef. On the menu will be dishes you might know, but with a creative twist. They work as much as possible with products from the Netherlands. As the restaurant itself is still under construction we had the preview dinner at farm De Lindenhoff in Baambrugge (a small town between Amsterdam and Utrecht). Brasserie Carstens will  work with many products from farm De Lindenhoff. As they work with local products, the menu will change every season. Brasserie Carstens will work with fish from local waters and meat from free range animals from De Lindenhoff farm, but they’ll also have plenty of options for vegetarians (like me). Pictured you see the Crudite that I had. Crudite is a French appetizer served with raw vegetables. This piccalilly crudite with lemon mayonaise is served with carrots and radishes from de Lindenhoff farm. Not only the dishes have a Dutch twist at Brasserie Carstens, the wines do as well! They serve wines from all over the world but there’s always a link to the Netherlands. A South African wine for example that is from a vineyard of a Dutch couple who fell in love with South Africa and now has a vineyard in Stellenbosch.
Pictured you see how they gave a Dutch twist to the Ceasar Salad; they made it with Dutch kale. The dishes at Brasserie Carstens aren’t only very tasty, they’re also very pretty. Look at this baked beetroot with horseradish, radishes and Dutch Buffel mozzarella. Isn’t it a work of art?

Several dishes that the Dutch often eat come from Indonesia, as it used to be a colony of the Netherlands. So you’ll also find some Indonesian dishes or dishes with an Indonesian twist at Brasserie Carstens. Pictured you see their vegetarian Rendang. Rendang is normally a meat stew but this vegetarian version was made with onions. Even the desserts have a Dutch twist at Carstens. This Meringue pie is made with ‘advocaat’, a Dutch egg licor similar to eggnog. It was served with ‘speculaas’ spices, the Dutch version of cookie spices. Prefer cheese for dessert? That’s also possible! They have a delicious cheese platter with 4 different cheeses served with fig spread and raisin-nut bread.

I’ll let you know when Brasserie Carstens in Amsterdam will open up.

Sign up to my newsletter to never miss any food news.