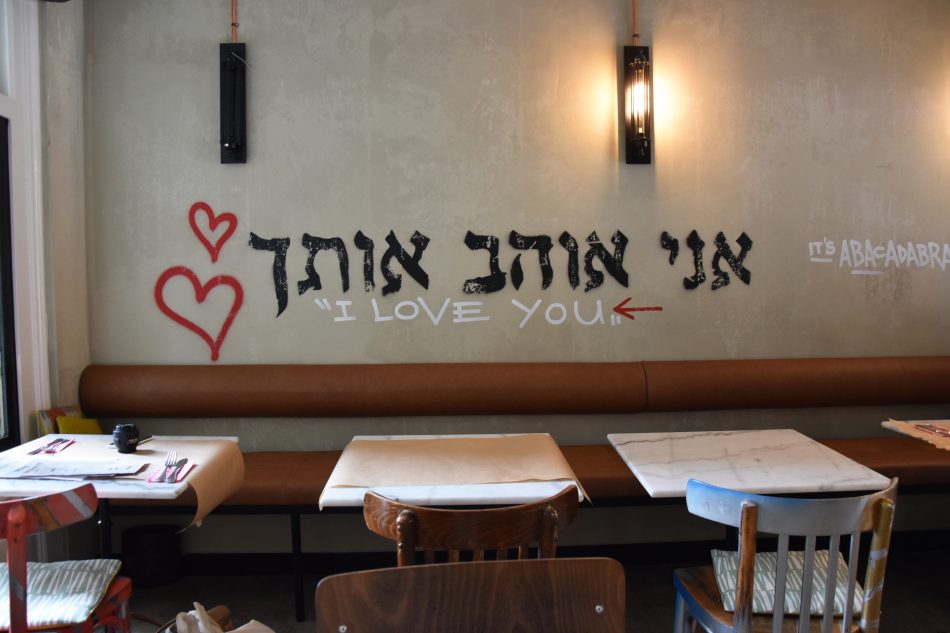 Ben Cohen is not a new name in Amsterdam, it has been a popular shawarma spot on the Rozengracht since the seventies. But now that Ben’s sons took over he restaurant they’ve changed it to a restaurant serving Middle-Eastern dishes. On this page I’ll tell you all about the new Ben Cohen Streetfood restaurant in Amsterdam.

Ben Cohen Streetfood Amsterdam is open for dinner 7 days a week, on Fridays and Saturdays they’re even open until 2am for night owls that crave some comfort food before heading home. On Saturdays and Sundays Ben Cohen is also open for lunch.
Allon and Dalien, the sons of Ben Cohen, serve street-food in Tel Aviv style.

Israel is my favorite food destination in the world and it’s also the best destination for vegetarian travellers. So I was very happy when I heard about an Israeli street-food restaurant opened up in Amsterdam. Before we even ordered we already got all the nibbles pictured above on our table. The pita bread with labneh was my favorite.

At Ben Cohen Streetfood Amsterdam you’ll find all kinds of dishes that are best ordered to share. Of course you’ll have to try one of the hummus dishes. They have 3 different ones; the classic hummus with tahini and chickpeas, a hummus with slow cooked lamb and a hummus with crispy eggplant. You can order an extra hardboiled egg or pita with you hummus as well, but it’s already served with two pita’s.

We went for the classical hummus and it was just like I remember it from Tel Aviv: super creamy! We also had Shakshuka, which is normally one of my favorite brunch dishes, but it also makes a great side dish for dinner. We went for the shakshuka with grilled eggplant, but there’s also a ‘hot&spicy’ version. On the to right you can see the Israeli cauliflower with tahini and labane, which I devoured right after this picture was taken.
As you can see on the picture below we also had the double smashed crispy potato. It’s a secret recipe of the chef unfortunately because I really want to make it at home as it was so tasty. But it’s potatoes that are smashed and then baked in the oven, so I might create my own version soon.

They don’t take reservations at Ben Cohen Streetfood Amsterdam. It’s just first come, first serve. So go there quickly so you can taste all this Israeli goodness.