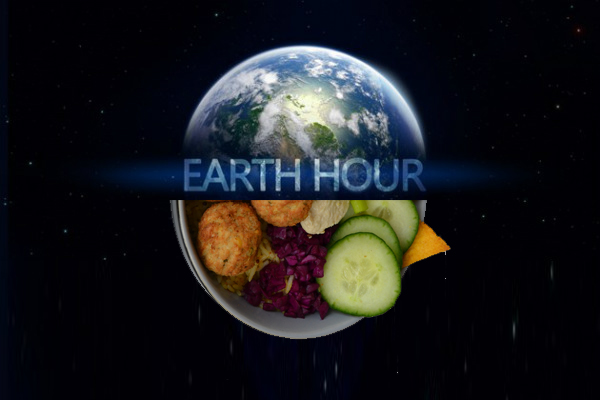 This Saturday, March 24 2018, it’s time for Earth Hour. Earth Hour is a worldwide initiative organized by the World Wide Fund of Nature (WWF in English, WNF in Dutch). From 8:30 to 9:30 pm individuals, communities and businesses are encouraged to switch of their lights for an hour.
Earth Hour is initiated because climate change is a big threat for the planet. As you probably know, the main cause of global warming is the expansion of the greenhouse effect. An estimated 29% of all greenhouse gas emissions is caused by electricity production. This is the largest share of green house gas emissions. About 67% of our electricity comes from burning fossil fuels.

If we’re all more conscious in our electricity usage, we can have an effect on global warming. Because I care about the environment and our planet (as I hope we all do), I support this initiative.
I’ll turn off my lights on March 24.

But there are also other things you can do to minimize your personal part in the greenhouse effect. I don’t owe a car and do everything by foot, bike or public transport. 27% of greenhouse gas emissions come from transportation.
It also helps if you buy locally and use seasonal ingredients from your own country.

But did you know that eating less meat and dairy also helps to cut down greenhouse gas emissions. Did you know that cattle produces methane as part of their digestive proces? There are several more causes, the fertilizer being used for example or the transportation from the animals to the abattoir and from there to the supermarkets.
So you can make an even bigger contribution to Earth Hour if you eat vegan on that evening. Eating vegan means that you don’t use any animal products. So not only meat and fish but also dairy, eggs and honey for example.

Eating vegan might sound boring or difficult but trust me: it’s easy and very tasty! Just try one of my vegan recipes on March 24 and maybe you’ll be convinced to eat plant based more often! Especially for Earth Hour I made this super easy and tasty vegan recipe. Why not give it a try during a dinner in the dark, because of course we’ll also switch of our lights! This falafel bowl is completely plant based, no animal products are being used.

Prepare the rice as stated on the package. The steamed rice from Tilda only needs to me microwaved for two minutes, but if you use another rice it might take you longer. When the rice is prepared, mix the ras-el-hanout herbs in.
Cut the tortillas in triangle shapes. Place them on an oven tray and spray with olive oil. Bake for 10 minutes on 180°C/350°F or until crispy. Fry the falafel balls in 8 to 10 minutes.
Divide the rice over 2 bowls and top with the falafel, tortilla crips, hummus, red cabbage, tomato and cucumber. Sprinkle with spring onions.