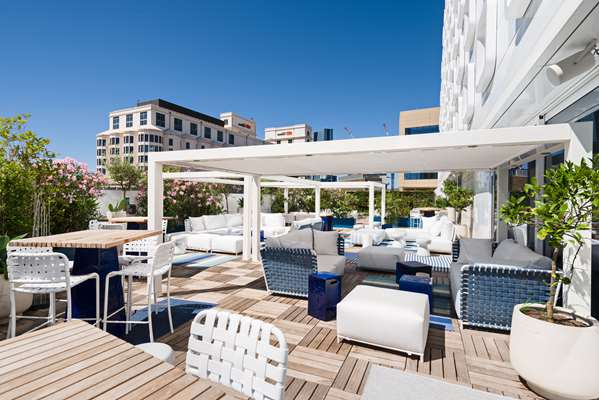 Last year Golden Tulip hotel Marseille Euromed opened up. This new four star hotel is designed with an interesting philosophy based on the new traveler. Golden Tulip has done research to find out what the difference in needs is between the older traveler and the new generation. Based on the outcome they’re doing a make-over on all their hotels worldwide and Marseille Euromed was the first hotel in which you can already experience this new philosophy. We spent a night at Golden Tulip Marseille Euromed during our road trip in the South of France. The first thing you’ll notice is the big white building that houses the hotel. It’s designed byItalian architect Massimiliano Fuksas. When you enter the building you’re in the lobby with a comfortable lounge to your left, a bar straight ahead and check in desks to your right.
Marseille is often referred to as the Capital City of Street Art in France. Local artist Remy Uno extends the streets of Marseille into the hotel lobby with a big mural.
In the lobby you’ll also find tandems which you can use to drive around the Joliette district, this business district next to the docks of Marseille has more and more trendy bars and restaurants opening up.
Golden Tulip Marseille Euromed also has a pool, a terrace and a gym. Did you know that Golden Tulip is originally from the Netherlands? The name might have been a clue (tulips!). In the hotel rooms you’ll see subtle references to tulips as well. Take a look at the tulip shaped bedside lamps for example. We had a big bad, free wifi and views of the sea. We woke up after a good nights sleep and enjoyed a delicious breakfast at Golden Tulip Euromed. There’s something for everyone. Bread with all kinds of toppings, pancakes, eggs, muesli, fruit, pancakes…
I went for a healthy breakfast and my boyfriend finished his with a French pastry.
We were totally ready to hit the road for our road trip in the South of France, which you can read about on this page.
Gotten curious about Golden Tulip Marseille Euromed? You can book your room here. Anne Travel Foodie is an independent platform, parts of my trips might have been sponsored but all opinions are always my own.