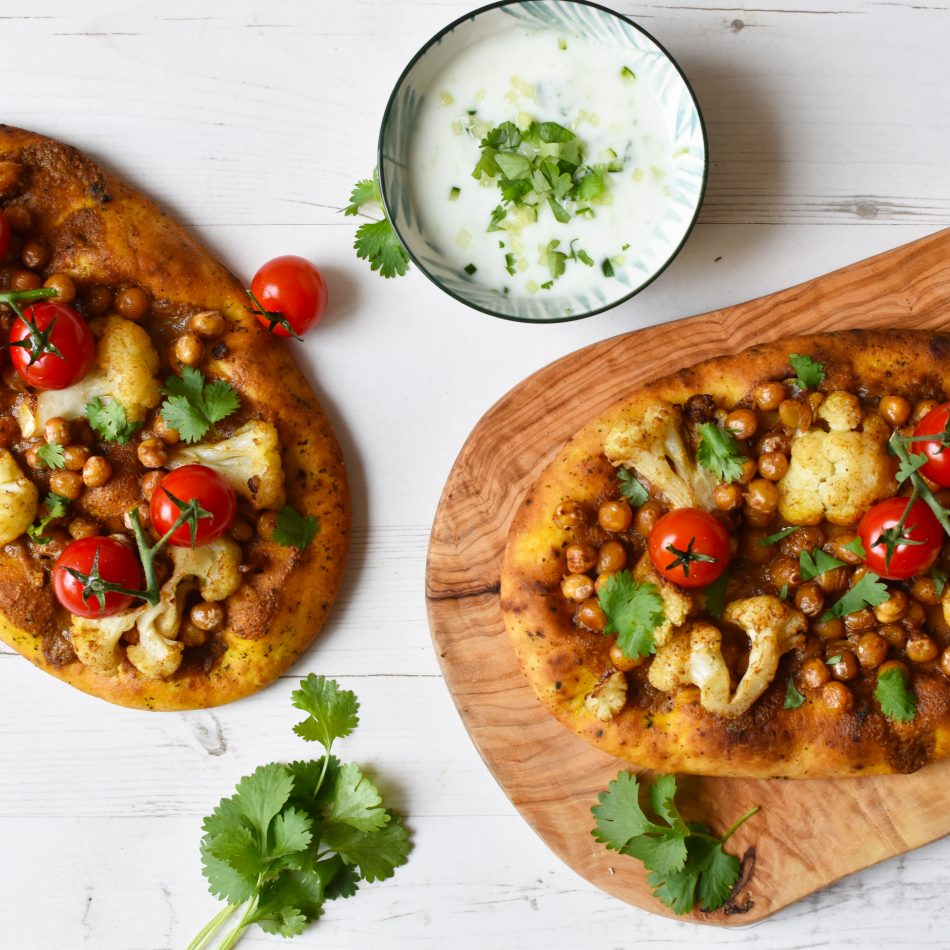 I love the Indian Naan bread. A few years ago I would only eat Naan bread as a side dish with a curry. But lately I’ve been discovering so many other ways to use naan bread in a dish. One of the ways is to use naan bread as a pizza base. I’ve showed you that before with my Naan Pizza recipe. The naan bread, especially if you use the garlic/coriander ones, have so much more taste than a regular pizza base. With my previous naan pizza recipe, I topped it like an Italian pizza. But as naan bread is from India, this time I made an Indian Naan Pizza.

I was inspired for this Indian Naan Pizza by Fairtrade Original. They sell Indian Korma spice paste and I saw a recipe to make Indian Korma pizza with that paste. I’ve adjusted it only slightly, as the recipe was already really nice. The recipe of these naan pizzas is vegetarian. You could simply make it vegan by going for vegan naan breads and replacing the yogurt with plant-based yogurt. The recipe below is for 2 people.

Preheat the oven to 200C.
Put the coconut milk in a saucepan and stir in the Korma spice paste. Bring to a boil while stirring. Let it boil down until you’ve got a thick sauce.
Warm a big pan, add the cauliflower and grill them for 1 minute on each side. Add some olive oil and the chickpeas to the pan. Warm for 2 minutes. Add the paprika and cumin and stir well. Bake for another 2 minutes.
Divide the sauce over the naan breads. Top with the chickpeas and cauliflower. Bake for 10 minutes.
In the meantime prepare the yogurt sauce by grating the cucumber above the yogurt and mix in half of the chopped coriander.
Put the cherry tomatoes in an oven dish, sprinkle with olive oil and put it with the pizzas in the oven for the last 3 minutes.
Garnish the Naan pizzas with the tomatoes and the remaining cilantro.