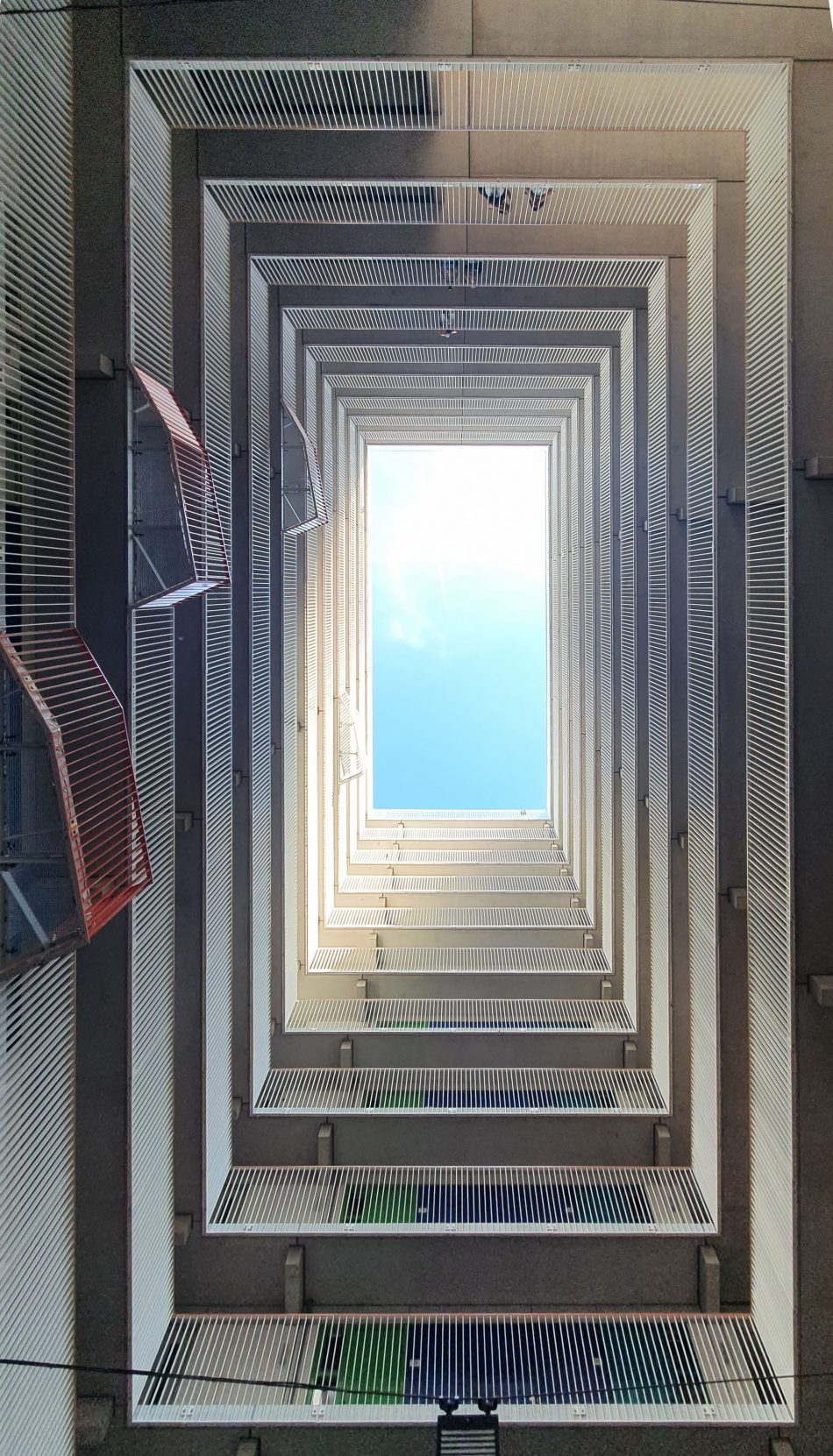 A very Instagrammable area in Tilburg is the Spoorzone. It’s an urban area right behind the central station. There’s many street-art that can be found there. Great for colorful Instagram pictures! Here you see me at skate-hall the Hall of Fame, most graffiti can be found around that area.

Talent Square is a student housing building. From the outside you don’t really see anything special. It’s just a brown stoned building. But on the inside there’s a lovely atrium. There’s one part that’s open to the public, that’s the part that you see pictured here. There’s also another part, that’s only accessible to the residents, that might be even more Instagrammable. It’s a rectangular atrium with 13 floors of students rooms surrounding it.

The Interpolis office building has a very Instagrammable entrance. I especially love it at night. Stand right in the middle of the entrance and put your camera on the ground for the most Instagrammable picture.

The nickname of this apartment building is the bird cages flat (‘vogelkooitjes flat’), because the glass balconies sticking out, look like bird cages. This building is very Instagrammable if you take a picture from straight underneath it.

The Fat Greek, often called TFG Tilburg is a modern Greek restaurant that serves delicious comfort food. Their pita gyros is served with French Fries inside the bun and the portions are big (you don’t need to feel ashamed if you ask for a goodie bag. Their dishes are quite photogenic so they’re perfect for posting on Instagram! Check out these milkshakes for example or their breakfast pancakes. The interior has a retro 70’s vibe, so if makes a very Instagrammable background.

Restaurant Rak is literally floating on the water of the Piushaven harbor area. And besides the beautiful views of the water, the interior of Rak is also worth taking a picture of! You see the waves continuing on the floor and you’ll find many plants, pink velvet sofa’s and green armchairs at Rak. Combine it with a touch of gold and you’ve got your perfect Instagram interior!
We visited Rak during the Food Blogger Tour 2018 that I organized.

The Lochal is one of the most popular Instagram spots in Tilburg. Located in the earlier mentioned Spoorzone, right next to central station the Lochal is the favorite spot of every photographer. In this big former locomotive factory you can now find the public library and other companies. It has a small cafe on the ground floor and the children’s section is designed by theme-park De Efteling. The huge textiles that are a reference to the cities former main economy are real eye-catchers.
A Dutch newspaper called the Lochal the Centre Pompidou of Tilburg.

The central station of Tilburg is also a very photogenic spot in Tilburg. The roof is often photographed. And I also like the central hall. When it’s dark, the hall gives a golden glow.

It’s not really a spot, but it’s very Instagrammable. For 10 days a year the biggest fun fair of the Netherlands settles down in Tilburg. Although settling down might not be the right verb as the attractions do everything but that. From rollercoasters to ferris wheels and from popcorn stands to catapults. The fair in Tilburg has many attractions to please everyone. The best thing is to come at dusk or after sunset for the nicest pictures.
Last year I organized an Instameet at the Tilburgse Kermis.

The Spaarbank is a cafe that’s located at a cross point where 5 roads are crossing. This infamous ‘vijfsprong’ is a spot where you need to be careful where you’re going as cars and cyclists are coming from 5 directions. But maybe you can find a quiet corner to have a look at the Spaarbank. I love this old bank building and I think it’s very Instagrammable.

Click here for the most Instagrammable restaurants of the Netherlands.