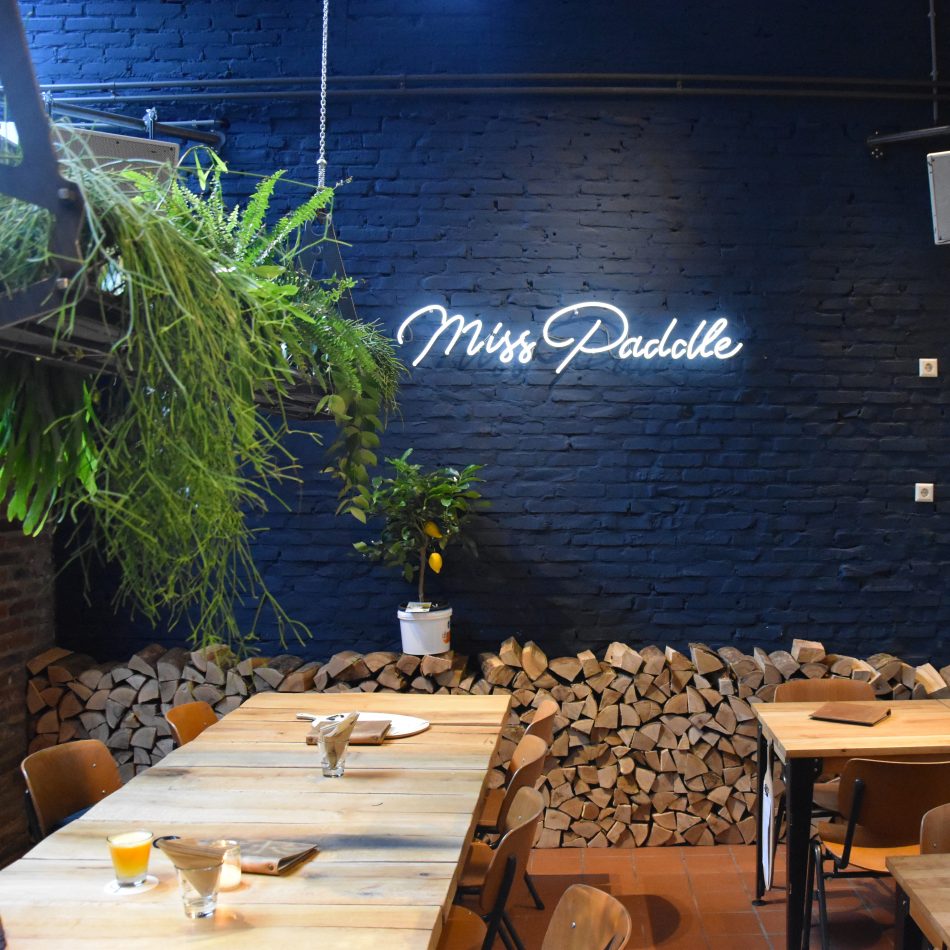 This month a new café has opened up in Eindhoven: Miss Paddle. Miss Paddle is a flammkuchen and artisan beer café in the city center of Eindhoven. Although you can enjoy flammkuchen for lunch or dinner here; they prefer not to be called a restaurant but a café. It suits them as it isn’t a formal place, but a cosy bar with local beers and freshly made dishes from the big oven in the corner.

The bar and the kitchen both have a central place in the room. This way you can see how the flammkuchen are made after your order and how your chosen beer is tapped. All the beers at Miss Paddle are brewed in Brabant, so they’re all regional. The waiters can also help you with some beer-pairing, so your beer matches your flammkuchen.

Flammkuchen is a dish that originated in the Elzas in Germany. The crust is made with nothing else than flour, water and a little bit of salt. As there isn’t any yeast in it and the crust is very thin, flammkuchen is not so heavy on your stomache. If you work in Eindhoven or if you’re spending a day shopping there, the flammkuchen at Miss Paddle makes a nice lunch. Visiting in the evening? Order a few different ones to share with your table.

Miss Paddles (named after the wooden paddles on which they serve the flammkuchen) has no less than 13 different kinds of flammkuchen on the menu, and even 2 dessert flammkuchen. You can order them in small (20cm) or medium (30cm). I would say that a small one is enough for lunch and a big one is more than enough for dinner.

They have 6 flammkuchen with meat, 2 with fish and 5 vegetarian ones. Especially having so much to choose as a vegetarian made me happy. They even have a vegan flammkuchen at Miss Paddle.

Click here for all my favorite vegan food spots in Eindhoven.

The menu changes regularly but I tried the ‘Champ’ with chestnut-mushrooms, balsamic syrup, Parmezan cheese and truffle cream and the ‘Popeye with goat cheese, sun-dried tomatoes and, of course, spinach. I also tried the ‘Blue’ with blue cheese, pear and walnuts. All of them were really tasty. You can tell that they use good ingredients and that they’re freshly made on the spot.

They also have two sweet flammkuchen for dessert at Miss Paddle in Eindhoven. Their popular ‘Cookie’ with ‘bastogne koeken’ and banana and the ‘Apple pie’ with apple and cinnamon that tastes just like, you’ve guessed it, apple pie.

Miss Paddle is located on Wal 7 in the city centre of Eindhoven and is open for lunch, bites and dinner from Wednesday to Saturday.