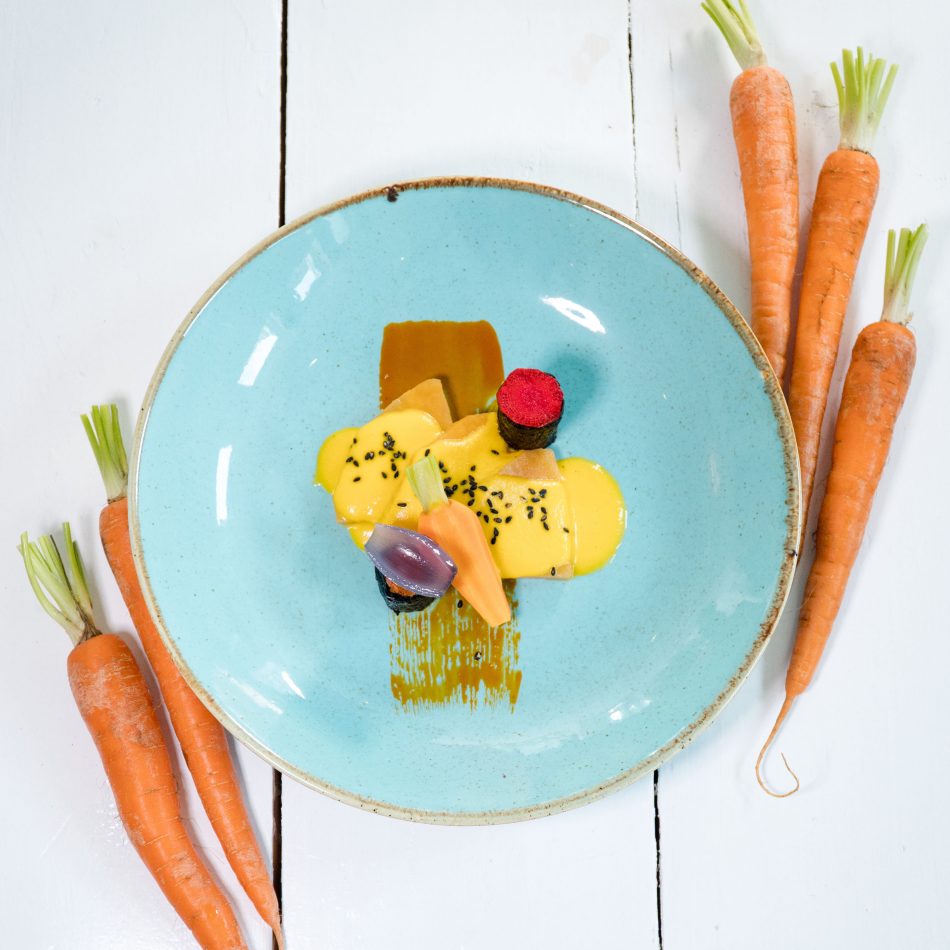 More and more vegan food spots are opening up in Eindhoven or restaurants will have good vegan options on the menu. A few years ago it was quite difficult to get a decent vegan meal in Eindhoven, actually a good vegetarian meal was already quite hard to find. I’m very happy to see that more and more vegan restaurants are opening up in Eindhoven, and that non-vegan restaurants are offering a good vegan dish on their menu.
On this page I’m sharing my favorite vegan food spots in Eindhoven with you. Please let me know in the comments if you have an addition for this list! Bij Albrecht is a 100% vegan restaurant in Eindhoven. If you’re eating vegan this restaurant is a heaven, as you can choose everything from the menu. Bij Albrecht is owned by the couple Manfred and Bernadette. He has been a professional chef for years and she graduated as a natural food consultant. Bij Albrecht is open for dinner where you choose if you want a 3, 4, 5 or 6 course vegan food experience. If you have any allergies you can let them know. Besides being completely plant-based Bij Albrecht works with as many local products as possible. Bar bistro Calypso is located on Stratums Eind and is a 100% plant-based bar. They’re open from Wednesday to Sunday and sell vegan comfort food. They’ve got all kinds of vegan tapas and nibbles, which I really like. It’s perfect to meet up with friends and enjoy all kinds of bites. They’ve also got burgers, wraps, bowls, sandwiches and an extensive vegan dessert list. Vegan Heroes is a 100% vegan take-out restaurant in Eindhoven. You can find all the best vegan fast food here. From vegan burgers to vegan loaded fries. They’ve got the famous Beyond Meat burger that will even trick your carnivore friends into eating plant-based. And I think their pink burger buns are very Instagrammable! In April 2022 Vegan Junk Food Bar opened their restaurant in Eindhoven. They already have several restaurants in Amsterdam and even one in Barcelona! I love the fast food of Vegan Junk Food Bar. It all tastes so incredibly good! My carnivore friends even love going there. The plant-based cheddar cheese is actually more tasty than most milk-based cheeses. Jungle Cafe is a 100% vegan breakfast and lunchroom in Eindhoven. They’ve got all kinds of delicious dishes like a scrambled tofu bowl, avocado toast with chili crunch or French toast. They’ve also got a small or big breakfast platter where you get a slice of avocado toast, a yogurt bowl, a juice and a mini cinnamon bun.
Jungle Cafe is a perfect place to meet up with babies or kids. They’ve got a selfmade play corner of 2 stories high which looks a bit like an indoor tree house. They’re located a bit outside the city center, to the North West. But from the Strijp S train station it’s only a 10 minute walk.

ANSH46 Cafe
ANSH46 is a clothing shop on the Grote Berg. Their ANSH46 Cafe is an all vegan coffee bar. They’ve got all kinds of coffee specialties and teas that are all 100% plant-based. From cappuccinos to chai lattes. They’ve also got more original flavors like Matcha Latte and Dalgona coffee. They also have some pastries and sweets to go with your drink that are all vegan. Sri Ganesh is a 100% vegetarian restaurant that’s been in Eindhoven since 2010. There’s no fish, meat or egg on the menu and they only use plant-based oils. Sri Ganesh serves Indian food like curries and masala’s. They’ve got quite a few vegan options on the menu. You can choose several small dishes from the menu for the entire table, or you can go for one of their set menus. The Happiness Kitchen has a few items on the menu with chicken or salmon but all the other dishes are either vegetarian or vegan. It’s clearly marked on the menu which dishes are vegan, and also the gluten-free options are clearly stated. You can visit The Happiness Cafe during the day for a vegan breakfast or lunch in Eindhoven, and The Happiness Kitchen is open for lunch and dinner. Good vegan options include vegan snickers pancakes, the vegan ‘tuna’ sandwich and the organic chickpea burger. You can even order a vegan high-tea!

Click here for my recipe for vegan espresso pancakes. Anne & Max has several lunchrooms all over the Netherlands, but the one in Eindhoven has got a unique selling point: they sell vegan cake from Taarten van Janssen! Taarten van Janssen is an Eindhoven based vegan bakery owned by Lisa. There’s always at least one vegan cake from her available at Anne & Max Eindhoven. I had this vegan passionfruit cheesecake once, it was delicious. Sometimes vegan cheesecake can have a strong cashew or coconut flavor, but this cake was very creamy and tasteful. Waffelicious is the perfect place to satisfy your sweet tooth. Besides their regular waffles and bubble waffles they also have vegan waffles. They have all kinds of vegan toppings for your waffle, not only the standard Oreo cookies and fruit but also delicious vegan chocolate that they buy in Germany. I had a vegan waffle with vegan chocolate spread, banana, strawberries and vegan chocolate chunks. The Future Diner is a vegan fast-food concept. They offer delivery and take-away in Eindhoven. All the burgers on their menu are vegan and they’ve got 7 different ones, including this double one. They’ve also got fries, onion rings and vegan nuggets to complete your meal. And if you still have got some room left: vegan desserts (the gluten-free vegan cheesecake is my favorite). I’m sure you can get a falafel sandwich at many places in Eindhoven, but I highly recommend Falafel Masters. They have many vegan options, not only for the pita falafel but also for the desserts. They have a vegan date-nut cake and a vegan baklava for example. Also nice: they have whole wheat pita bread, I think that’s so much tastier and healthier than white bread!

After Rotterdam and Amsterdam, Sugo Pizza has now opened up in Eindhoven as well. You don’t get round pizza’s at Sugo, but Pizza al Taglio, a rectangular shaped pizza of which you’ll get a slice. At Sugo Pizza they have several kinds of vegan pizza’s. What’s on offer depends on the season but when I was there they had a vegan pizza with artichoke, one with sun-dried tomatoes and olives and one with spicy homemade arrabiata sauce. Chidoz is a Mexican take-out and delivery restaurant that has different restaurants in the Netherlands. They’re also located in Eindhoven. They’ve got several vegan items on their menu, like this vegan burrito with black rice, black beans, grilled vegetables and guacamole. But you can also create your own burrito, taco, salad or burrito bowl with ingredients of your choice.

Flavor and Spice
Flavor and Spice has many vegan options on their menu which are all clearly marked. They focus on healthy foods with a Middle-Eastern twist. They got many inspiration for their dishes from the Persian cuisine. They’ve got several ‘bites’ that you can order (to share) as a starter or a snack that are all vegetarian or vegan. As main dishes they’ve got bowls of which 3 can be ordered vegan. They also have mezze to share that can be ordered completely vegan as well.

Other vegan options in Eindhoven
Miss Paddle always has a vegan flammkuchen on the menu and Bagels & Beans also has several vegan options.