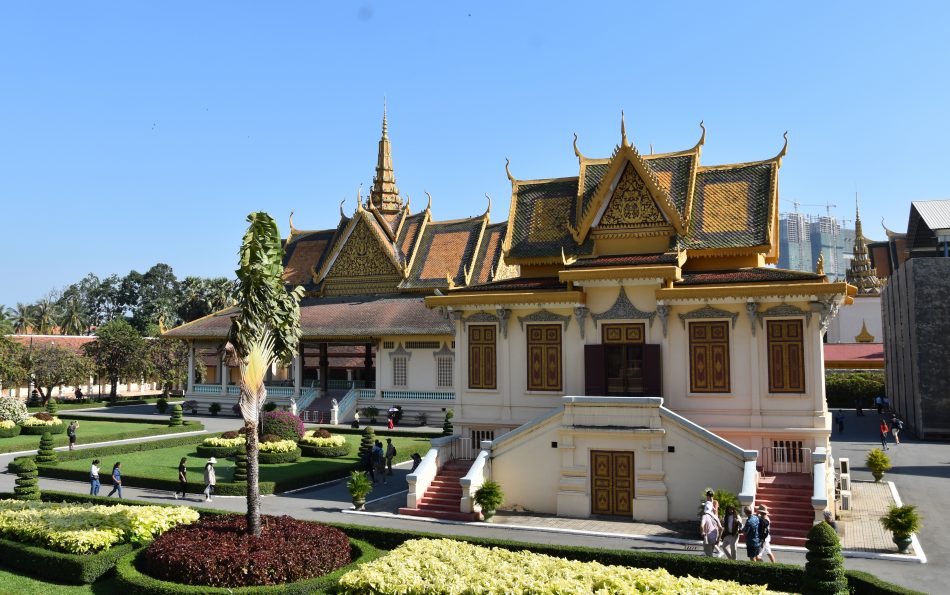 If you only have a few hours in Phnom Penh and you can only visit one sight; I recommend that you visit the Royal Palace. The king actually lives in this palace but some parts are open to the public. It’s a large premisses with many beautiful buildings. It might remind you of its counterpart in Bangkok. You can buy your ticket on the Eastern side of the complex. Be aware to dress modestly.

Cambodia is gaining popularity as a touristic destination, but only a few decades ago the situation in the country was terrible. Dictator Pol Pot and his army called the Khmer Rouge tortured and killed ten thousands of innocent people (the exact numbers are still debated but often it’s estimated at 2 million deaths). In Phnom Penh you can visit S21, a former high school that the Khmir turned into a torture prison. And a little bit south of the city you’ll find the Killing Fields. Even though it’s a dark page in history, I recommend you visit at least one of the two. It’ll give you a sense of the recent history of Cambodia and makes you realize how lucky you are if you were raised in a peaceful country.
We went to the Killing Fields. From Phnom Penh a tuck tuck driver can take you there for 10$. They can also wait gor you there and take you back to the city for 20$ in total which you’ll pay when he dropped you off in Phnom Penh again.
The killing fields are the mass graves where the Khmer Rouge killed their victems. Not much remains but the audio tour (included in the entrence price) tells you chilling stories. The most horrible part for me was the grave for women and children. The stories about how they were tortured and killed were allmost imbearable. At the end of the tour there’s a memorial with thousands of skulls arranged by sexe and age.
It’s not a place you’ll leave happy, but hopefully it’s a place you’ll leave feeling blessed.

I allways like visiting the night markets in Asia, so I also went to the Phnom Penh night market. There was some confusion about the opening times. My Lonely Planet guide and Trip Advisor both said that it was only open from Friday to Sunday but Google said it was open 7 days a week. I guess Google was right, as we went on a Tuesday and it was open. It officially opens at 5pm but it’s nice to wait untill 6 or 7pm at least when it’s dark and many locals visit it as well. The official night market is on a square and mostly sells clothes, but if you walk behind the square you’ll find tens of stalls selling food, gifts and all kinds of plastic objects.

The Central Market (Psar Thmei) in Phnom Penh is centrally located in the city. Part of it is covered and there are also some stalls around the building. I was more impressed by the building itself than the market that it houses.

Wat Phnom is a temple. It has a red temple building in the front and a white pagode in the back. It’s best reached from the East entrance where you’ll see the stairs and the temple behind it. Don’t expect to spend much time here, you’ll have seen it all in a few minutes.

The National Museum of Cambodia is located in Phnom Penh. It’s a wonderful museum to stroll around, as the walls are mostly open and it has a beautiful courtyard. In the museum you’ll find many statues explaining the history of Cambodia.

Click here to read more about our trip to Cambodia.