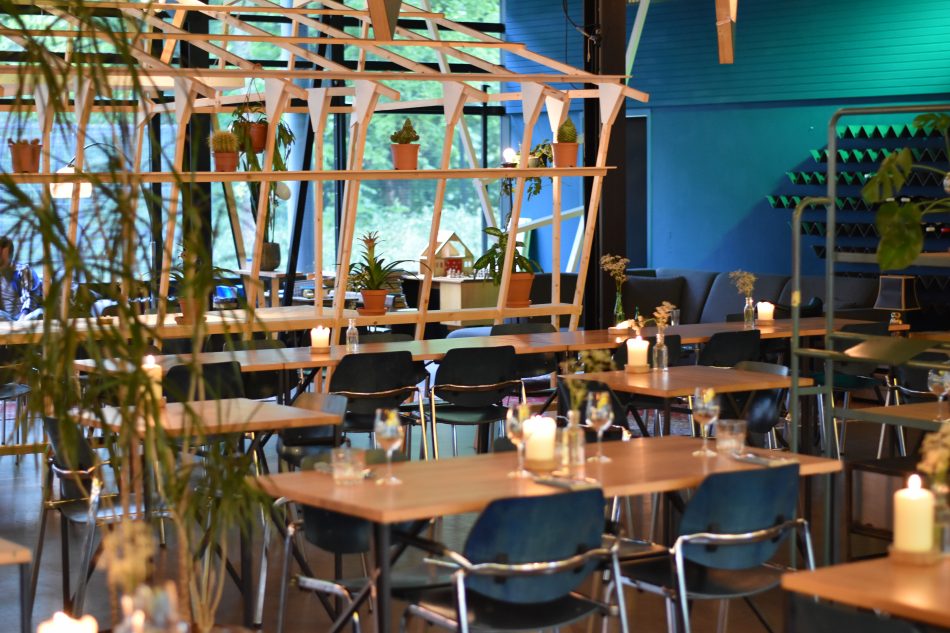 My prayers have been heard! Finally more hip and healthy food spots are opening up in Utrecht. Utrecht is the 4th biggest city in the Netherlands but until recently I thought there weren’t that many nice food options. It was lacking vegetarian friendly spots especially. Luckily I discovered Kantien (Dutch for Canteen) just outside the city center near popular neighborhood Lombok.
And even better: you can try their delicious dishes with a special discount!

Kantien is housed in a former city council building and was literally used as a canteen. The restaurant owner did a great job in redecorating the place to a cosy restaurant with a deep green wall and triangle shaped lamps pointing down from the ceiling. At Kantien you can order from the menu or go for a 3, 4 or 5 course surprise menu. I went for the 5 course vegetarian surprise menu and got really delicious dishes! The dish with cantharelles, olive and cumin pictured above was the first course. They added tortilla crisp crumbs and that gave the dish a nice twist. The flatbread with baba ganoush and red beet falafel wasn’t only very tasty, it looked beautiful as well! With all the dishes you could see (and taste) that the chef had put a lot of work in it. The tarte-tatin of tomatoes, yellow pepper, basil oil and goat brie was probably our favorite dish. The flavors and textures were perfectly adjusted to each other. It’s hard to tell on the picture so I think you should just go and taste it in real life! Kantien is open for lunch, drinks and dinner from Wednesday to Sunday. They have a big outdoor area for sunny days and a separate meeting room.

Reserve your table at KANTIEN

Click here for all my favorite food spots in Utrecht.