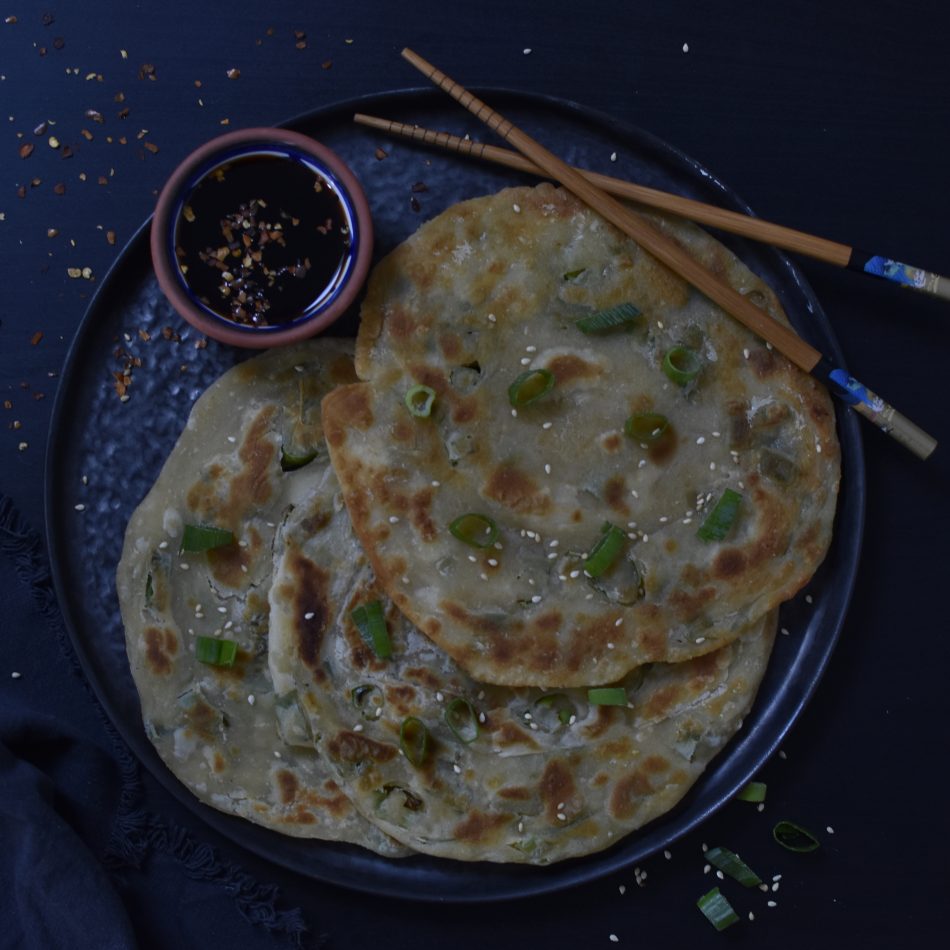 Because it’s almost the Chinese New year, I wanted to share a Chinese recipe with you. I remember from our trip to Beijing that it isn’t easy eating vegetarian in China. But I was determined to find a good vegetarian Chinese dish to make. And I got one! It’s even suitable for vegans too! On this page I’m sharing my blog’s first Chinese recipe: Scallion Pancakes.

To celebrate the Chinese New Year I wanted to share a Chinese recipe with you on my website. But, as you might know, many Chinese recipes include meat or fish. Even in their most used sauces there’s often fish (yes, there’s actually fish in Fish Sauce and oyster juice in Oyster Sauce). But there are a few nice vegetarian and vegan Chinese dishes. Chinese dumplings can be made vegetarian for example and another popular vegetarian and vegan Chinese dish is Scallion Pancakes.

On this page I’m sharing the recipe for Scallion Pancakes. In Chinese the dish is called. It’s made with scallions (also called spring onions or green onions). I made the dough for these Chinese Scallion Pancakes myself, which is a great lockdown activity. I used sesame oil for extra tasty dough. I only use the green part of the scallions, as I think they are the best part and not as bitter as the white part of scallions.
You only need a few ingredients to make these scallion pancakes. Make sure to serve them with a nice dip sauce. I served them with the premium light soy sauce from Lee Kum Kee as I think that has a great flavor.

Mix the flour and the salt in a mixing bowl. Make a well in the middle. Pour in the hot and cold water and the sesame oil. Stir with a wooden spatula. Use your hands to knead the dough for 3-5 minutes until soft. Cover with plastic and let rest at room temperature for 30 minutes.

Cover your work surface with flour. Take out 1/4 of the dough and put it on the work surface. Cover the dough lightly with flour. Use a rolling pin to flatten the dough until you’ve got a very tin round surface.
Brush with a bit of sesame oil. And top with 1/4th of the scallions. From the side closest to you, roll the dough up to the side furthest away from you. So you get a cigar shaped roll. Now roll that cigar shape up to get a snail shell shape. A bit like the shape of my Tahini Rolls.
Put the snail shell that’s done on a parchment lined baking tray and cover with a damp cloth.
Repeat with the remaining three pieces of dough.

Take out the first snail house and put it back on your work surface. Use a rolling pin to roll the dough out flat to a circle. You’ll probably still. lightly see the snail house circle. Repeat with the remaining dough.

Warme some oil in a frying pan and fry the Chinese scallion pancakes for 3-5 minutes on each side, or until golden brown.

Put some soy sauce in a small bowl and sprinkle with chili flakes. Cut the scallion pancakes in small triangles and serve with the sauce.