My review of Cirque du Bonheur 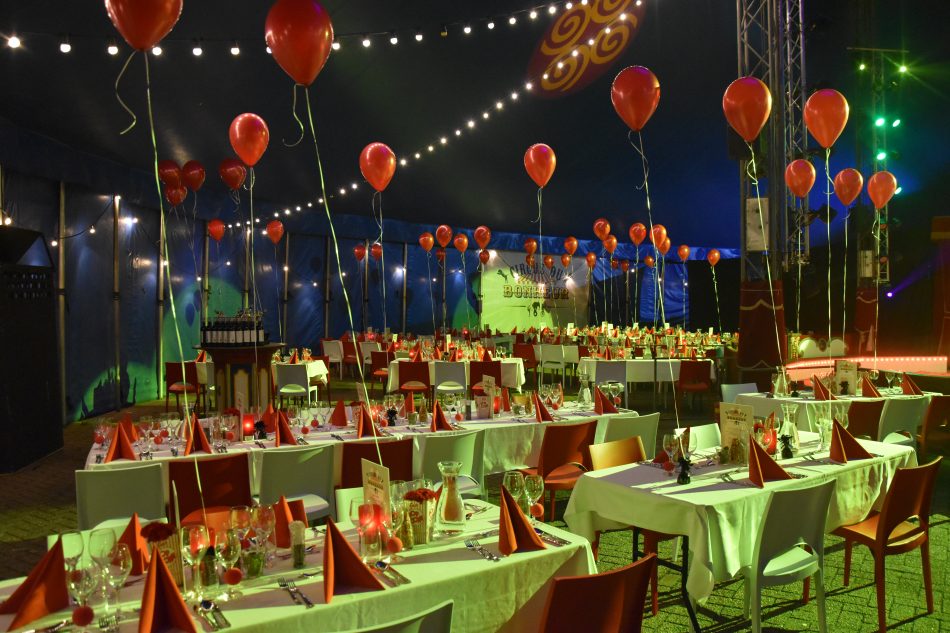 Cirque du Bonheur took place in a circus tent in my hometown Tilburg. In the center was the circus arena and the tables where arranged around it. The tent was heated well and decorated entirely in style, everything was red and white and there were balloons on the table. The flowers on the table were in popcorn boxes and everyone had a clown’s nose on their wine glass. Speaking of wine, the wine that was served during Cirque du Bonheur was also in circus theme. Both the red and the white wine were from El Circo. Each of these Spanish wines is inspired by a circus act or performer. These acts are a metaphor of the wine itself. It shows that the Bonheur Horeca Group thought out the circus concept to the detail! The circus acts where guided by the youngest ringmaster of Europe. Kevin van Geet is Dutch and only 25 years old. He was the master of ceremony of the evening and didn’t only introduce all the acts, he also introduced all the dishes. The first act was with beautiful black Frisian horses that walked in formations on music. It looked beautiful but I have mixed feelings about animals in a circus. Luckily they didn’t have to do anything unnatural. After the first circus act, it was time for the first course. The staff of several restaurants of the Bonheur Horeca Group served the dishes by first walking a round in the circus arena. Such a nice sight! The first course was inspired by typical circus snacks; hotdogs, hamburgers and ice cream cones. I got a vegetarian version (as you see pictured) but the regular version was a mini hotdog with gamba and shrimp mayonaise, a mini burger with smoked salmon and a mini cone with tuna tartare and wasabi cream. We also had a green pea soup and saw some more acts. One of them was a juggler who didn’t only juggle with pins and rings but also with fire! It was very impressive and so nice to have such cool entertainment during your dinner! After that it was time for the main dish. For the meat eaters it was beef shoulder steak and I got a potato and egg tortilla. It was garnished with potato mousseline, kale, swede and flower sprouts. It looked like confetti, so it was also within the circus theme. What’s a circus without clowns? The clown of Cirque du Bonheur was so funny, he took 4 people from the audience and created a very enjoyable scene with them. We also had a great act of a rope danser and aerial silk, but I was so impressed by both of the acts that I totally forgot to take pictures. The dessert was a donut with cream of salted caramel and popcorn ice cream. Such a great combination and also totally in the theme of the circus dinner.