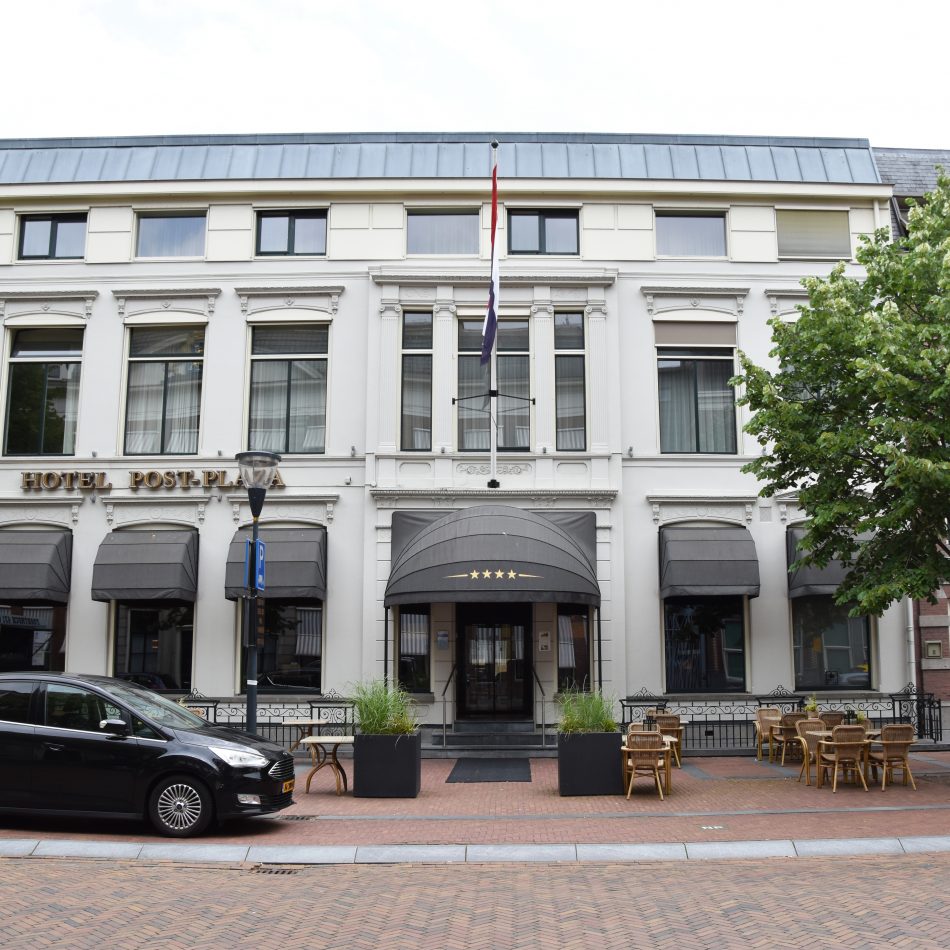 Planning a trip to Leeuwarden, the capital city of the province Friesland in the Netherlands? I recommend that you stay at the Post Plaza Hotel. This 4 star hotel is located in a former bank building and post office building in the city center of Leeuwarden. The hotel also houses a Grand Cafe and a coffee roaster. On this page I’m sharing my review of Post Plaza Hotel Leeuwarden.

The Post Plaza Hotel is located in the city center of Leeuwarden in a beautiful old street. I’ts close to all top sights in Leeuwarden, everything is within walking distance.
The Post Plaza Hotel and Grand Cafe opened up in 2015 in a former post office building. Via a glass hallway it’s connected to a former bank building. In the bank area you’ll find the reception and 40 hotel rooms. In the post office area you’ll find the grand cafe and 42 hotel rooms.
Everywhere in the hotel and restaurant you’ll find references to the former uses of the building. Like this painting of a postman from van Gogh.

The building is very so you’ll see the building’s special elements in the rooms and hallways. The rooms at Post Plaza Hotel are beautiful designed. We loved the grey walls and dark touches in the room. The bed was just perfect, I slept like a rose. There’s free wifi and the rooms have bathrooms that have everything you need. And do you see the postal elements in the paintings on the wall? Such a nice touch!

We stayed at the Deluxe Room and you can see that its not your average hotel room. The beautiful old closet was a real eye catcher. And as we were on the top floor of the former post office, the wall with the windows was triangle shaped. We had a nice view over the old streets of Leeuwarden. There was a desk in the room, arm chairs and a coffee maker.

Post Plaza also houses a Grand Cafe, located on the ground floor of the former post office. It’s an absolutely stunning place with many old elements still intact but a great combination of modern touches as well. The bar is centrally located in the middle of the restaurant. There are tables on both sides, so you don’t have the feeling that you’re in a massive space. And the yellow walls and wooden furniture also contribute to the cosy feel. At the back wall is a little shop with local products. Amongst them their own home roasted coffee and their own beers.

The menu of the Grand Cafe Post Plaza changes regularly. When we were there it was asparagus season. My friend had asparagus with salmon and I had a vegetarian version. The grilled asparagus were served with avocado, truffle potatoes, poached egg, Hollandaise sauce and locally grown samphire.

The dessert was also quite special. It might look like a regular Crème brûlée, but it was made with their home roasted coffee! They’ve been home roasting their coffee since the grand cafe opened. This way they could serve something unique and they could control the quality of the coffee. You can order your cup of Post Plaza coffee at the Grand Cafe but you can also buy bags of coffee (beans) for at home.

The Post Plaza Hotel has a delicious breakfast buffet. From toast with cheeses or meats, to eggs, pastries and granola; they’ve got it all. There’s freshly squeezed orange juice and the real Frisian sugar bread. And of course their own coffee to go with it.