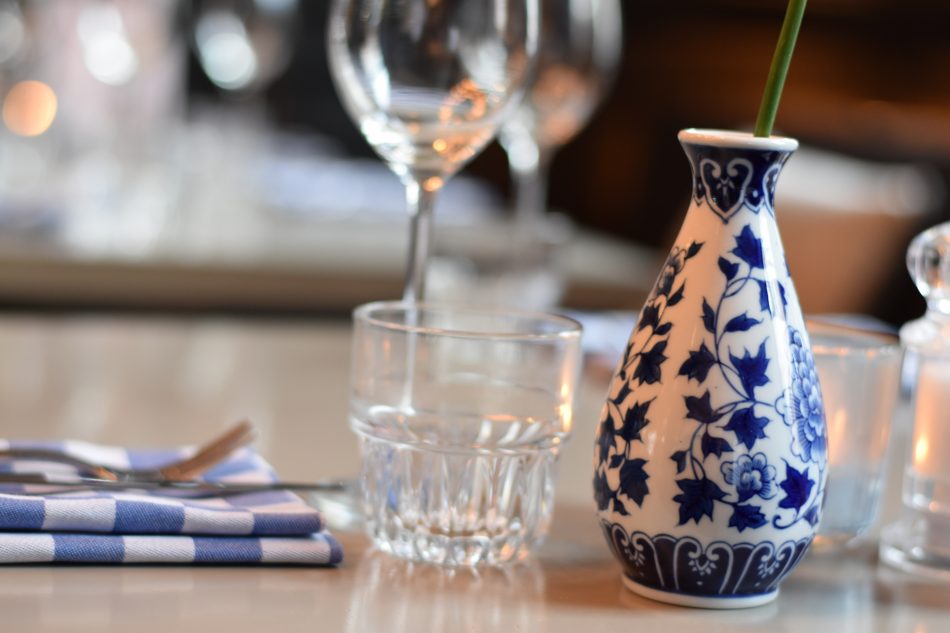 Although I’ve already been to Restaurant Joost in Amsterdam a couple of times, I have the feeling that many people don’t know about it. I think that’s quite a shame as their dishes are really good and the staff is very friendly.  So let me tell you a bit more about Restaurant Joost, so you can say you discovered this restaurant before the big crowd did!

Restaurant Joost is named after Dutch writer Joost van Vondel (yes, the big park in Amsterdam is named after him too). Fun fact: according to the Guiness book of Records Vondel wrote the shortest poem ever, he even won a poetry contest with it in 1620.
You can see the Dutch influence in Restaurant Joost in more than just the name. The interior also has some Dutch elements (like the ‘Delft blue’ vases on the tables) and more importantly: the food is also inspired by Dutch dishes and ingredients. As I starter I had an asparagus salad as it was asparagus season in the Netherlands. They also serve a platter of Dutch fish or Dutch cheeses as starters and a vegetarian goat cheese salad with fennel, yellow beets and oranges. As I main dish I had this big plate of grilled vegetables with lentils and tomato salsa. They also have a few other meat and fish dishes, a burger with Gouda cheese and the very typical Dutch dish ‘stamppot’. Stamppot is a mashed potato dish with vegetables. Their stamppot changes regularly and is often served with a piece of meat.

For dessert they have the classical Dutch dessert ‘Hangop’ which is drained yogurt, with dried plums and a syrup made from tea.  Their cheesecake, pictured here, has a Dutch touch to it as it’s an apple-raisin cheesecake served with apple crumble. Book your table at Restaurant Joost here or check this page for all my Amsterdam food favorites.