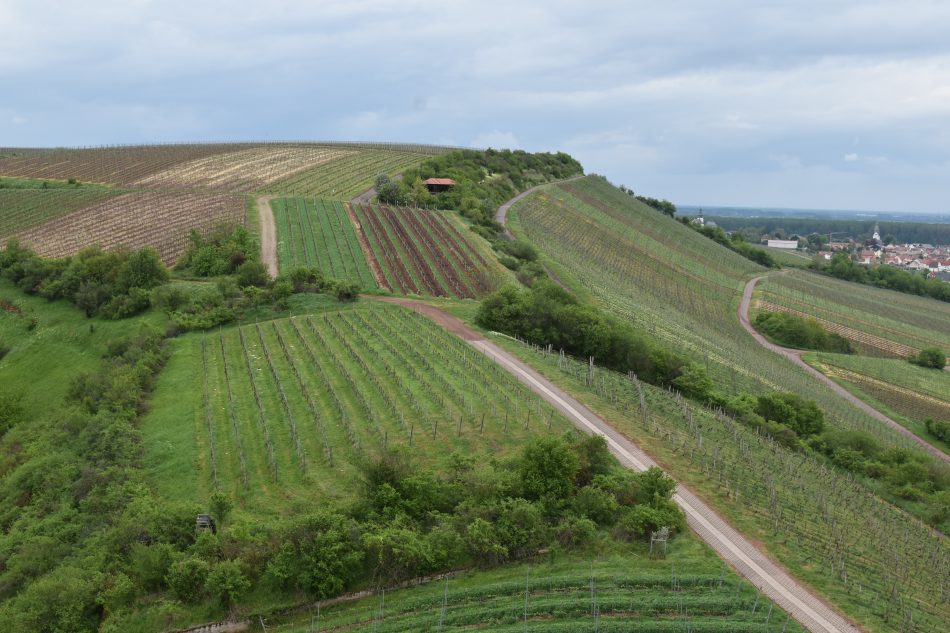 If I’d ask you to name 3 wine regions in Germany, I’m afraid you can’t name any other than Mosel. And that’s a pity because Germany has a lot more to offer. As I believe that Germany is thé wine country of 2019, let me tell you something about one of the biggest wine region in Germany: Rheinhessen.

There are 13 major wine regions in Germany and they are mainly located in the South-West of the country. Rheinhessen, located south-west of the river Rhein and the city of Mainz, is the biggest one. There are about 2.500 wineries, of which around 1.000 bottle their wines for sale.
It’s often thought that it’s a flat area but Rheinhessen is actually a valley with rolling hills and height differences.

In the 1970’s the land was re-divided so that every winery owned one big vineyard instead of several smaller ones. This made the vineyards more efficient but it also means that they took out all the grapevines back then and the oldest plants are now ‘only’ about 40 years old.

Many people think of sweet white wine when they think of the Rheinhessen region. And it makes sense as it’s the birthplace of Liebfraumilch ánd known for its sweet Riesling.
But, partly due to climate change and partly due to the vision of the new generation of winemakers, German wines are getting more dry.
The dry Riesling is one of my favorite wines at the moment. It’s fruity and easy to drink. Perfect for summer and to accompany vegetarian food.
And there are some great Pinot Noirs from the region, although they call the grape Spätburgunder in Germany. Don’t expect a Burgundy wine when you taste it, Spätburgunder has its own flavor.

I went on a wine-tour in Rheinhessen and wrote down my favorite ones on this page. One thing I noticed is that the majority of the winemakers are quite young. It’s great to see the next generation at work, who aren’t afraid to try new things.
Most of the wineries listed offer tasting so you can make your own Rheinhessen wine-roadtrip (make sure you have a designated driver ór to spit out everything you taste).
If you’re short on time or you don’t want to visit all the wine houses by car, you can also go to the Maxime Ortswein preview. Once a year they showcase all the first bottles of the year in Mainz at the end of April.

Thörle
The two brothers Christoff and Johannes took over the winery in the village Saulheim from their parents in 2016. I visited their brand new winery that is yet to open officially, located about 500 meters from the old building. In this beautiful modern building with a terrace and balcony overlooking the vineyards, they organize wine tastings.
They mainly grow Riesling (60%) and Pinot Noir (25%).
Their parents focussed on the local market and produced more average wines. The brothers are aiming for a higher quality and have a more international focus; they export 40% of their wines to around 30 different countries. But they still remain their parents values so they don’t use any additional yeast, don’t use any pesticides and all wines (except 1) have a cork instead of a screw cap.
I loved their dry Rieslings. They have a very low sugar percentage and also not a very high amount of alcohol which makes it easy to drink.
They also have a nice Silvaner. It’a a grape that isn’t very well-known outside of Germany. It has a high yield, so it’s often used for table wines. But if you let it mature it gets richer in flavor. It’s a quit creamy grape but because it’s grown in limestone ground you do have a mineral taste. The Probstey Silvaner from Thörle is grown on a south-facing terrace. Even though the wine contains less than 1 gram of sugar, it still has a hint of sweetness because of the fruity taste.
Thörle also has 20 Spätburgunder (Pinot Noir) vineyards. My favorite Pinot Noir from them is the 2016 Saulheim Spätburgunder Kalkstein. It’s a village wine that spend 12-14months in the barrel. It’s a great appetizer and really nice to drink in the summer as well.

Braunewell
Braunewell is located in the same region as Thörle and also owned by two brothers. They took over from their parents around 10-15 years ago. You can find them near the village of Essenheim. Their vineyards consist of 30% Riesling, 30% Pinot Noir and 30% Pinot grapes like Pinot Grigio. They only export 10% of their wines, mostly to the UK and Estonia, so if you want to taste them you can best go to Rheinhessen.
They have the Fair ‘n Green label which means that they’re certified sustainable wine growers. Fair ‘n Green is a German initiative, and even though other wine countries are joining, it shows that the German winemakers really care about the environment. Braunewell uses lighter bottles as 45% of the CO2 emmisions in wine making is in the bottle. They’re also working on reducing the water use and don’t have an irrigation system.
Even though they have several great Rieslings and Pinot Noirs, my favorite was their sparkling wine Blanc de Blancs, Chardonnay Brut Nature. When you think of sparkling wines you automatically think of Champagne and then maybe Cava or Prosecco. But it’s time to also think about Germany when thinking of sparkling wine. I was quite surprised to taste a good German sparkling wine and also one that isn’t made of Riesling grapes. I truly recommend it!

Gunderloch
Winemaker Johannes recently took over from his father, who in his turn took over from his father. This family business has 26 hectares if vineyards. They have stainless steel barrels for the more affordable wines and oak barrels made from local wood for the higher categories.
Johannes his father focussed on sweet wines and even though they’re still important, he focusses more on the dry wines. That being said, his ‘liquid business card’, the wine that’s often the introduction to Gunderloch, is the sweet Riesling called Jean-Baptiste named after his great-great-great grandfather. During the wine tasting I tasted 3 sweet Rieslings and 4 dry ones. My favorite was the 2017 Pettenthal GG. It was a single-vineyard, made with grapes from the best part of the vineyard and riped on oak barrels.

St Antony
St Antony produces vegan, organic and biodynamic (Demeter) classified wines. The vineyards have been around since 1920 but you can tell that they are constantly improving, experimenting and renewing. Not only with their new labels but also with the wines.
Their vineyards are close to the Nierstein village. They have several Rieslings and also Pinot Noirs and Blaufrankisch.

Brüder Dr. Becker
This winery is 150 years old and one of the pioneers in organic wine. You can find them in Ludwigshöhe, located in between Mainz and Worms. They own 12 hectares and produce 80.000 bottles a year. 32% of their grapes are Riesling and furthermore they have Silvaner, Scheurebe and Spätburgunder.
Weingut Brüder Dr. Becker is one of the founding members of Ecovin, they’re qualified Demeter since 2006 and the first vineyard with eco-label within the VDP.
In 1991 Hans and Lotte Pfeffer-Müller took over from Lotte’s parents and they still run the winery.
Because of the 150 years anniversary they organize an Anniversary Party on August 3 and 4 and an exclusive wine-tasting for wine enthusiasts on December 7 2019.

Also nice:
Weingut Bernhard where father and daughter work hand in hand. One has a lof experience and the other has lots of energy; a great combination.
Mertz has a great dry Weisburgunder called Gumbsheim that was grown on Kalkmergel (a mix of kalk and Ton.
Eva Vollmer has two great dry Rieslings, her ‘kalkader’ is more dry and grown on soils high in calcium and her ‘Riesling feinherb Tonmergel’ was grown on more rough land and has a hint of sweetness. She also has a great non-alcoholic wine and a Weisburgunder natural wine.
Geschwister Schuch are not sisters any more as the current winemaker is an only child. The name comes from her ancestors bus she and her father make the wines now. I tried their Nierstein Spatburgunder trocken, it was from a new vineyard, this was the first vintage of these wines. It was already very tasty, so it has great potential.
Weingut Winter has many VDP classified wines; 5 gutswein, 4 ortswein, 3 grosse lage and one reserve (Chardonnay). I tasted their Dittelsheim dry Riesling, it was one of their Ortsweins, made with grapes from their best vineyard. It was high in minerals because of the kalk stone and very structured.