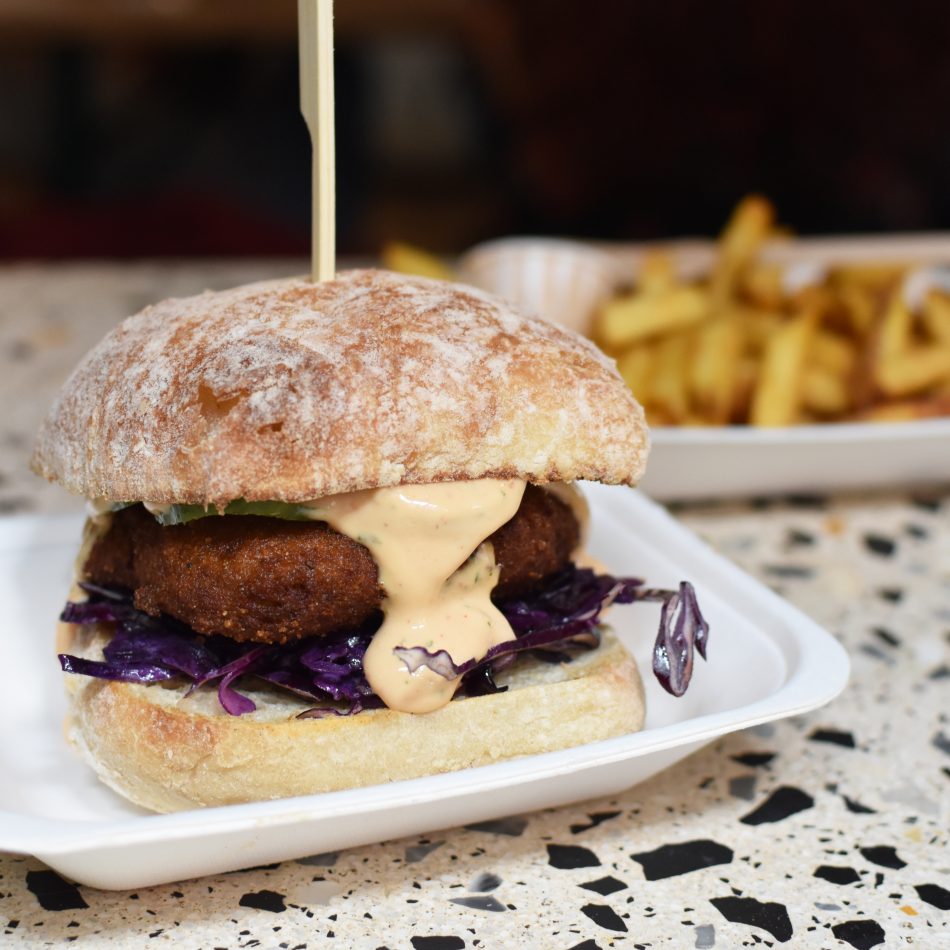 Food Sorcery is a cooking school in Manchester that offers cooking workshops. If you let them know in advance they can offer a vegetarian friendly cooking workshop. I went on one of their ‘Manchester inspired food nights’ and they made sure that I could make vegetarian versions of the dishes we made. We made Didsbury Dim Sum, inspired by Chinatown, with Vimto squash chili dip. And Posh Tofu fingers, chips and Manchester caviar (=mashed peas). The potatoes were really good. The trick is to fry and bake them. Just peel and cut the potatoes. Warm oil in a pan, add butter or margarine and shortly fry the potato chips until light brown. Then bake them in the oven for 15 more minutes. Trust me: they were delicious.

Hampton & Vouis is a coffeeshop that also has great cakes, muffins and bronuts, which is a hybrid of a brownie and a donut. Most of the sweats are vegan and they always have at least one gluten free option too. We had two of the vegan, gluten free and refined sugar free bronuts that Soul Vegan delivers to Hampton & Vouis. One with strawberries and cream and one with salted caramel waffle and pecan. We also had a vegan lemon and peach muffin. Hampton & Vouis is very centrally located, right next to Manchester Town Hall.

Vertigo is a 100% plant-based food shop in Manchester. They’re fairly new; they opened up their first restaurant in the beginning of 2019 and the second one in the First Street neighborhood August 2019. Vertigo is open for breakfast, lunch and dinner. I had this vegan bowl for dinner with sweet potato falafel, grilled pepper, wholegrain rice, spinach and beetroot hummus.

Firebird Hope is located in the Yes building that is owned by a record label and houses a pizza bar and 2 concert venues as well. They have a great vegan burger at Firebird Hope called the Triple-6 Vegan Burger. It’s home-made seitan with koji mayo, house-slaw and fast pickles on a sourdough bun. Order it with a side of skin-on fries with lime and chili salt if you’re hungry.

Evelyns is an all-day restaurant and bar that’s a great spot for lunch or dinner. They have several great vegetarian options. From Shakshuka and French toast to avocado toast with poached eggs. The restaurant itself is very Instagrammable with exposed brick walls, many plants and copper accents.

Ginger’s Comfort Emporium is an ice-cream shop on the 1st floor of alternative department store Afflecks. They have many vegan flavors, clearly marked with VE on the menu that’s on a black board.

Herbivorous is a vegan restaurant at Hatch. Hatch is an area where they created a shops and restaurants in sea containers. Herbivorous is founded by Damian and Robin, 2 enthusiastic foodies. The menu changes regularly but it’s always street-food inspired and 100% vegan.

The Alchemist is a creative cocktailbar and restaurant with two locations in Manchester. They’re experts in ‘molecular mixology’ and mostly known for their cocktails. But they also have a great food menu with several vegetarian items like this Smashed Avocado & Poached Eggs on Sourdough toast.

Click here for my trick for poaching eggs for dummies.

Finding nice vegetarian food on airports can be a challenge. I’ve often walked away from sandwich shops at the airport because every sandwich had meat on them. Luckily you can get this vegetarian falafel halloumi burger at Cafe Balzar at Manchester airport. You can find them in terminal 1.

The Rivals is the cafe inside the Royal Exchange Theater. I mostly love it because of the colors and the atmosphere but they also have some great food. They have some vegetarian bar bites, a vegetarian sandwich with grilled halloumi and a vegan sandwich with wild mushroom roasted in truffle oil.

Click here for all top sights and activities in Manchester.