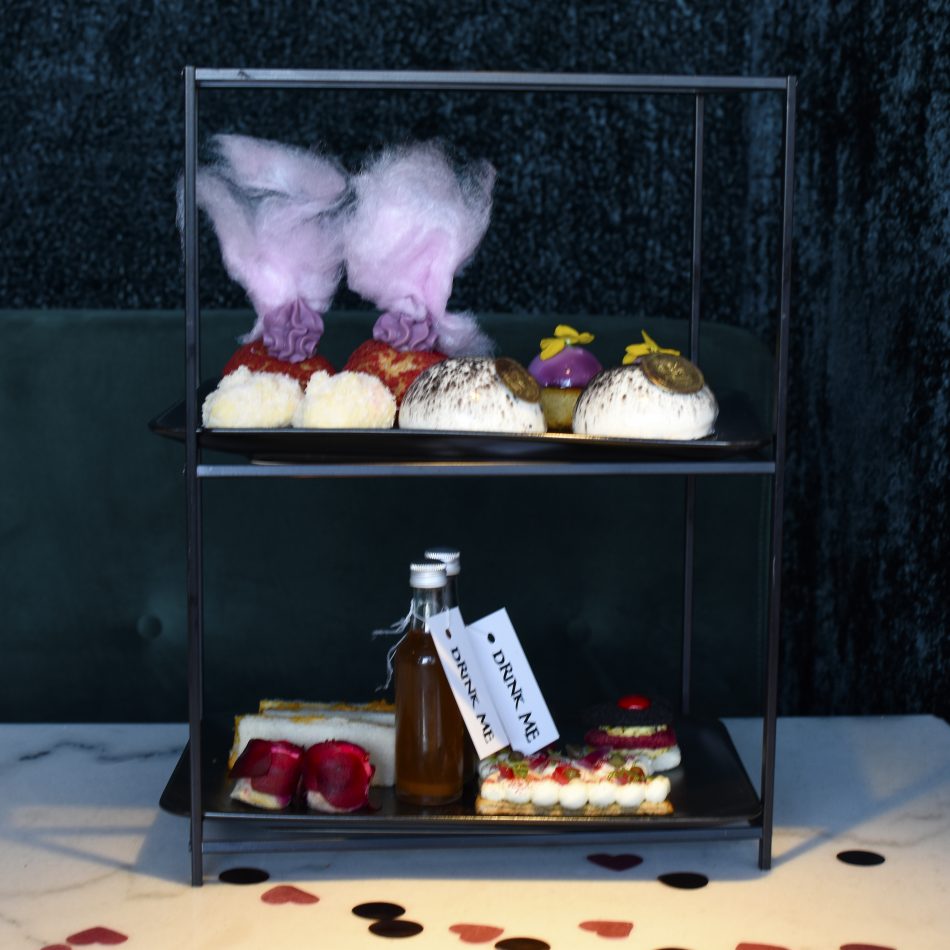 Intelligentia ICE started their ice cream salon in 2014 in the creative Strijp-S area in Eindhoven. It was founded by the couple Björn and Sabine. Sabine has a creative background and Björn used to be a sommelier. His love for flavors and her love for design come together beautifully at Intelligentia ICE. They started their ice cream parlor 5 years ago to make people taste their food more, instead of just eating it. So they developed ice cream flavors with very special tastes. A few months ago they moved to a new space, still in Strijp-S but a lot bigger.

The new Intelligentia store in Eindhoven is divided in two parts. One part is painted bright pink and houses the ice cream shop. You can order your ice cream cone to- go here or sit down at one of the tables for a cup of coffee with something sweet. There’s also a ball pit for grown ups in this space.
The other part is called the Wonderroom and that’s where the Afternoon Tea is served. The walls are covered with green velvet, there are silk flowers hanging from the ceiling and the floor is checkered. You get why it’s called a ‘wonderroom’ and you already get that Alice in Wonderland feel straight after you’ve walked in.

Us Dutch people often call it a ‘High Tea’ but the official name for a tea party with finger food is ‘Afternoon Tea’. You can reserve your afternoon tea from 2 people and up, but it’s also great for bachelor parties or baby showers.
At Intelligentia you start your afternoon tea with a welcome drink. This magical drink is inspired by the Cheshire Cat and also changes color.

After your welcome drink you’ll get a plateau with savory and sweet dishes, all inspired by Lewis Caroll’s Alice in Wonderland. Of course it couldn’t lack a ‘drink me’ drink, although at Intelligentia it’s a soup instead of a drink. It’s a tomato consume made with ponzu, an Asian sauce made with rice wine. There’s also a heart shaped toast for the queen of hearts and ‘white roses that have been painted red’ which is cream cheese covered with beet root ‘petals’. There are also two sandwiches. We had a vegetarian high-tea as we both don’t eat fish or meat, and it was well accommodated. So let them know at your reservation if you also want a vegetarian version.

An afternoon tea isn’t complete without scones. At Intelligentia ICE they make the scones themselves which results in big raisin scones that aren’t too dry nor too moist. Served with your afternoon tea you get play cards with all the dishes and their ingredients on them. I love it how everything was worked out in detail.

Probably everyone’s favorite during an afternoon tea or high tea: the sweet part! There were four big sweet treats per person. Even though I’m a sweet tooth and I can eat quite a lot, it was too much for me to finish. Luckily we got to take a doggy bag home so we could enjoy some of the sweets later.
You see the Cheshire Cat inspired pastry in the background, it’s stuffed with dulce de leche and has homemade cotton candy on top. On the left you see a treat in bunny shape, inspired by the white rabbit. In the background you see a small mushroom shaped cake with a beautiful shiny frosting. The white bowl in the front with the black speckles is an ‘Eat Me’ pastry. And just how in the story Alice shrinks and grows when she takes the ‘Eat Me’ sweets, there’s a smaller version hidden inside.

The Alice in Wonderland inspired Mad Hatter’s Afternoon Tea Party at Intelligentia in Eindhoven is served on Fridays, Saturdays and Sundays. You can choose either the 12 o’clock or the 3pm shift. The price is 29,95 per person, or 39,95 including the experience aperitif. There’s a special children’s version for 19,95.
Click here to reserve your Afternoon Tea at Intelligentia in Eindhoven.