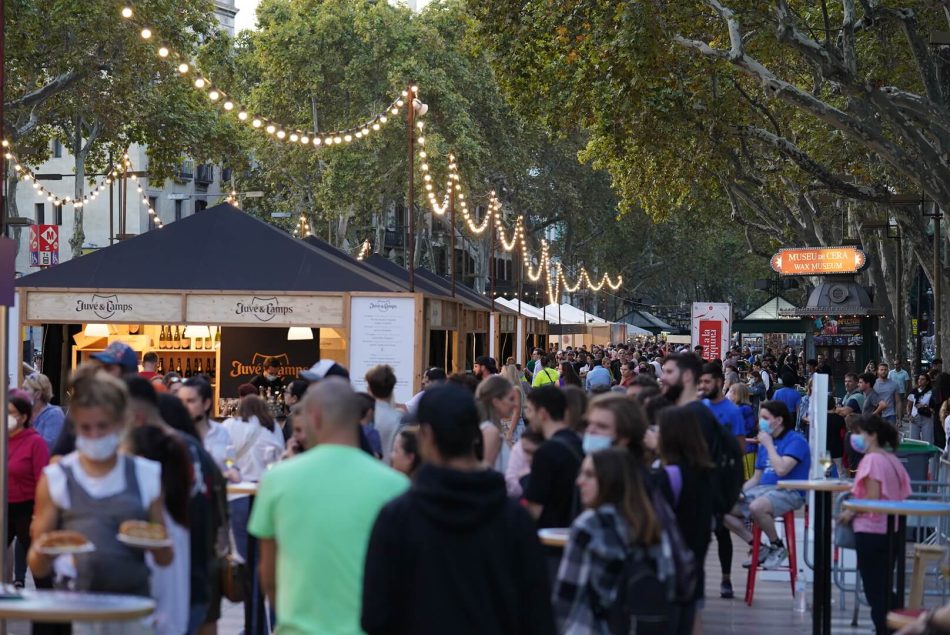 Barcelona Wine Week
Although most of the food festivals in Barcelona take place in spring and summer, the Barcelona Wine Week takes place each year in Februari (in 2023 it’s from February 6-8). As you want to host a wine festival indoors, so that you can taste better.

Food Festivals in May

BCN en las Alturas
In the beginning of May Barcelona en las Anturas takes place. During this weekend you’ll find all kinds of food, fashion and music at the Torre de Bellesguard. This tower at the North-West end of the city is designed by Gaudi, so you’ve got a lovely background. The entrance is €5,- and you’ll get your first drink for free.

Biergarten
Beer lovers, this one is for you! For a whole weekend you can enjoy all kinds of beers at this Biergarten festival. There’s a wide variety of beers, including 0.0% and gluten-free beers. There’s also German food available like ‘bratwurst’, vegan sausage and a children’s menu. The beer festival takes place at Poble Espanyol. You have to reserve a menu beforehand to ensure your entrance.

Tapantoni
Tapantoni is a food festival in Barcelona that lasts an entire month! From mid-May to mid-June many restaurants in the Sant Antoni neighborhood are joining this festival. All restaurants offer a special dish, a tapa, for this festival. On the Tapantoni website you can find all joining restaurants and their menus. There’s also a map, so that you can create your own tapas walking tour.

Eat Gaudi
Eat Gaudi is a food market that also takes place at Gaudi’s Bellesguard tower. Eat Gaudi takes place at the end of May. For three full days you can explore all kinds of food and drinks. There’s also live music and a children’s program. Entrance is €5,-.

Monumental Club
Monumental Club is a festival that takes place twice a year (in May and in September). It takes place on Saturdays from noon to 10pm. Until 5pm there are activities for children too. La Monumental is a beautiful old bullfighting arena. There’s a stage for music and acts, and several food trucks on the outer circle.

La Cuina del Port Ruta de Tapas
La Cuina del Port is the commercial organisation for the establishments near the harbour in Barcelona. They organise a tapas route called ‘Ruta de Tapas’. It lasts the entire month of June. Nine restaurants are joining and they all offer a tapa with a drink for only €6,-.

VegFest
In June it’s time for a vegan food festival in Barcelona: VegFest. In 2022 it took place on June 11 and 12. There’s all kind of vegan food for sale, and they also have all kinds of artists that are performing. It takes place at the Estrella Damm factory. Tickets are €12,- for adults (kids under age 12 are free).

Monumental Club
Monumental Club is a festival that takes place twice a year (in May and in September). It takes place on Saturdays from noon to 10pm. Until 5pm there are activities for children too. La Monumental is a beautiful old bullfighting arena. There’s a stage for music and acts, and several food trucks on the outer circle.

Vegan Fest Catalunya
Vegan Fest Catalunya is the biggest vegan food festival in Europe. It takes place every year in September in Terrassa, a city in the province of Barcelona. The entrance is for free and besides serving 100% vegan food, they also strive to be as eco-friendly as possible. It takes place on a Saturday and Sunday in mid-september. Besides food stands, there are also all kinds of activities like show cooking.

Click here for all good vegan restaurants in Barcelona

Terra I Gust
Terra I Gust is a sustainable food festival that takes place at the end of September. At Ronda de Sant Antoni you can taste all kinds of sustainable dishes. The entrance is free and the dishes are €5,- and drinks are €2,50.  There are workshops for the whole family, exhibitions and talks for discovering the world of gastronomy with a more environmentally respectful perspective and with a greater respect for the people who produce the food we eat.

Mercat de Mercats
Every year in October it’s time for the Mercat de Mercats festival. A gastronomic festival that takes place at Plaça de les Glòries. Besides all kinds of local food, there are also presentations, cooking shows and tastings. Chefs from some of the best restaurants in Catalonia are present at this festival.

Bravas Fest Barcelona
A street food festival, totally dedicated to Patatas Bravas that’s what Bravas Fest Barcelona is. Perfect for all the Patatas Bravas lovers out there. It takes place on a weekend in October (in 2022 it was on October 8-9) in Poble Espanyol. There are workshop, cooking shows, contests and live music. There are ten participating restaurants and they all serve another tapa besides their version of Patatas Bravas as well. The event is for free for residents of Catalunya. Tourists pay the regular Poble Espanyol entrance fee.

Barcelona Beer Festival
This is the must-visit festival for beer lovers! Every year in October (in 2022 it’s from October 14 to 16), L’Hospitalet de Llobregat in the South West of Barcelona you can find Europe’s biggest meeting point for craft beer lovers. The festival terrain is over 8,000m2 and you can find more than 500 different beers here.

Palo Market Fest
Every month, and sometimes even twice a month, the Palo Market Fest takes place in Palo Alto Barcelona. It’s a market 2.0. They’ve got all kinds of fashion and design stands, but also a lot of (street) food. The next editions in 2022 are June 4/5, July 2/3 and July 16/17. A ticket is €5,-.

Van Van
Van Van hosts very regular food truck festivals (almost every month), and each edition has a different theme. They had one with only spicy food for example, or a 100% gluten-free food festival. Keep an eye out on their socials to hear about the next edition.

Super Picnic
Super Picnic is not really a food festival, as it’s open every day of the year. Super Picnic is an indoor space where you can order food from all different kinds of restaurants in Barcelona. It’s a great ‘food festival’ for when it rains! They’re located in the Les Corts neighborhood in the South West of Barcelona (and they’ve also got a Super Picnic just outside of the city at Sant Cugat).

Dinner with the Stars
Dinner with the Stars is an event that takes place from June to October at the Fabra observatory. Your evening starts with dinner and after that you’ll be able to visit the museum, the noucentista hall (early 20th century) and the meridian telescope. You will be able to observe celestial bodies in far away constellations, stars and most part of the Solar System through the 1904 telescope, one of the largest and oldest telescopes still in use in Europe. They work with set menus, but they’ve got several different ones, including one for vegetarians.

P!Opera (picnic and opera)
P!Opera (picnic and opera) is an event that takes place on Fridays in the summer. It often starts at the last Friday of July and lasts until the first Friday of September. P!Opera takes place at Poble Espanyol. You can enter at 7pm for the picnic style dinner and the show starts at 9pm. In around 80 minutes you’ll hear all the greatest Opera hits. I’m sure you’ll recognize many, even if you’re not an opera fan. Tickets are 25,- for the Opera show alone and 45,- including the picnic dinner.

Click here for my favorite vegetarian restaurants in Barcelona