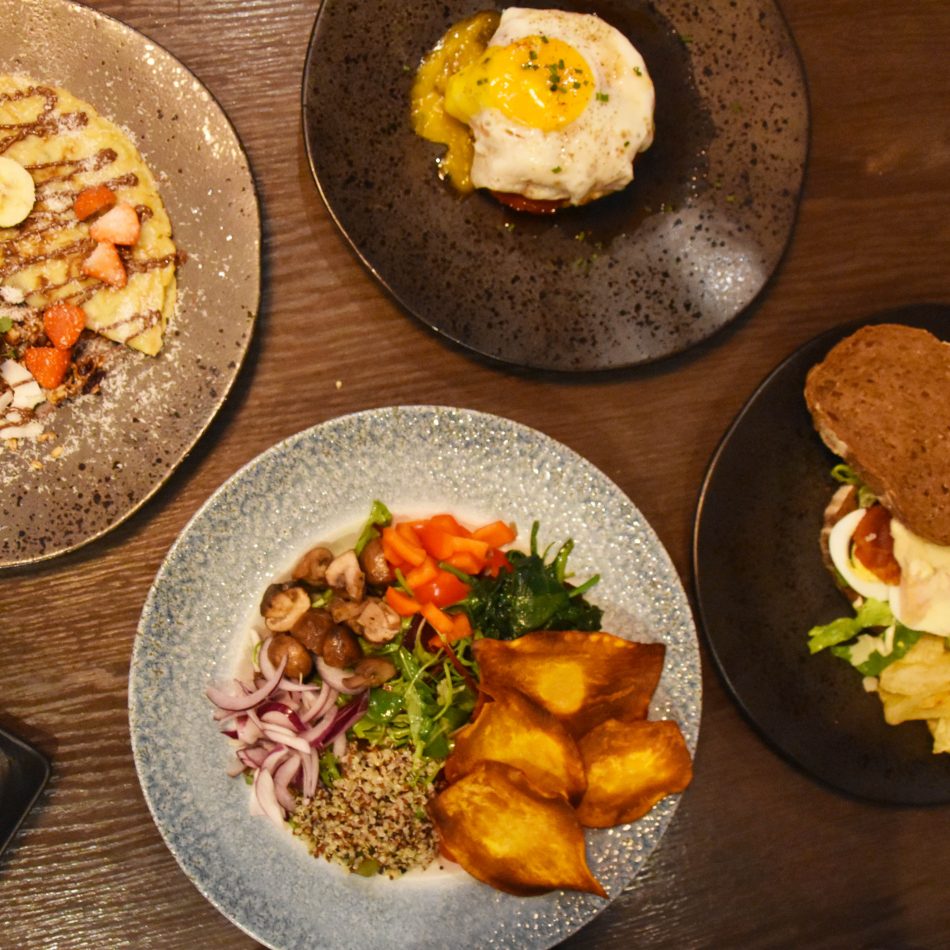 Grand Cafe Puur in my hometown Tilburg has just launched an entire new lunch menu. I was invited with a few other bloggers from Tilburg to try out some of the dishes and I have to say that Puur has put themselves on the map with this new menu! Many of my friends told me they didn’t know Grand Cafe Puur, but they’ve been around for quite a while. They’re the lunchroom of Hotel Mercure, right in the city centre on the Heuvel. In the basement of Hotel Mercure you can find Restaurant Taste!, one of the better restaurants in Tilburg. And even though most people do know Taste!, they don’t know Grand Cafe Puur. After you’ve seen the pictures of their new lunch menu and I’ve told you how to get a 20% discount on your next visit, I’m sure you want to give Grand Cafe Puur a try! Grand Cafe Puur has many healthy items on their new lunch menu. Amongst them are 4 different kind of yogurt bowls that are all gluten-free. The one pictured is their Cacao Bowl with Greek yogurt, granola, banana, grated coconut, cacao nibs and strawberries. They also have several egg dishes, like eggs benedict, that you can also order on gluten free bread, brioche bread or sweet potato crisps for a lactose free version. Speaking of healthy, they also have 3 new salads on their lunch menu. A Ceasar salad, a salmon salad and this vegan salad that is 100% plant-based. It’s made with lettuce, quinoa, spinach, sweet potato, mushrooms and cherry tomatoes. They have another good choice for vegans on the new lunch menu of Puur: this vegan yogurt bowl with soy yogurt, strawberry, chia seeds, banana, kiwi, almonds and goji berries.

Click here for all vegan-friendly food spots in Tilburg. The new lunch menu of Grand Cafe Puur isn’t only filled with healthy dishes, it also has quite a few things on it to satisfy your sweet tooth. They have four different kinds of American Pancakes on their lunch menu for example. One with Nutella, one with apple and cinnamon, a savory version with egg and the red fruit and vanilla ice cream pancakes pictured above. Other sweet items on the new lunch menu include fresh croissants, oatmeal cookies and this French Toast made from cinnamon sugar bread served with apple, raisins and whipped cream.
You can order from their new menu from 8am until 4:30pm so it’s also a great spot for breakfast or brunch. Good news for everyone eating gluten-free. They have 4 different gluten-free wraps on the new menu of Grand Cafe Puur. These wraps are made with tapioca, a starch made from the cassava plant. They have three savory versions (one with avocado and egg, one with chicken and a vegan version with avocado) and this sweet version. This tapioca wrap tasted like a pancake and was served with Nutella, banana and ice cream.
They also have 4 different kind of sandwiches that can all be ordered on gluten-free bread. I’m sure you already decided by now that you want to go and try out this new lunch menu at Grand Cafe Puur. Well I’ve got good news for you! The whole month of January 2019 you get a 20% discount on your lunch at Grand Cafe Puur! So make sure to visit them as soon as you can!