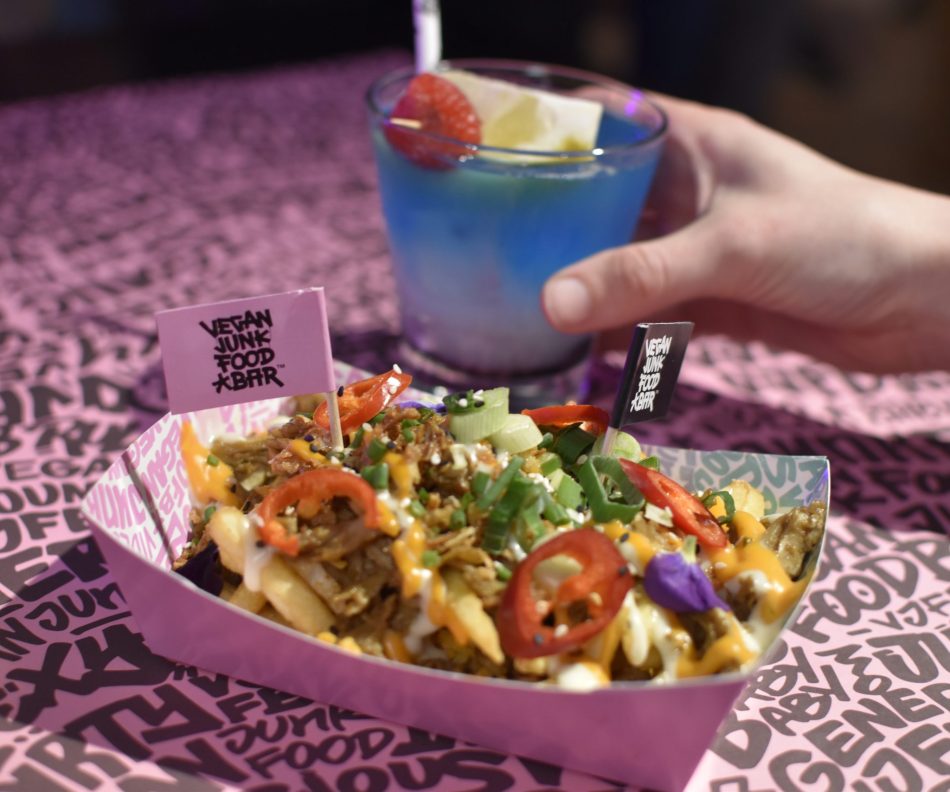 Good news for everyone in the South of the Netherlands! This month the Vegan Junk Food Bar opened up in Eindhoven. I was invited for the opening party and on this page I’m telling you all about the VJFB in Eindhoven.

The Vegan Junk Food Bar opened up their first all vegan fast-food burgerbar in Amsterdam-West in 2017. It was a big succes straight away! By popular demand they opened up a second restaurant at the Marie Heinekenplein in neighborhood De Pijp in October 2017 and a third restaurant in Amsterdam Oost (East) in Februari 2018. In 2019 the Vegan Junk Food Bar opened up their fourth restaurant: VFJB Downtown. You can find it at the Regulierdwarsstraat, in the middle of the city center in one of the most popular (gay-friendly) streets for going out.
After the succes in Amsterdam, they also opened up a restaurant in Rotterdam. And they even went international; they’ve got a restaurant in Barcelona and are opening one in Cologne, Germany soon.

In April 2022 Vegan Junk Food Bar (or VJFB as it’s abbreviated) opened up in Eindhoven. They’re located in the city center, at the Kerkstraat, right next to the church. It’s in the middle of the shopping area and within 10 minutes walking distance of the train station. And it’s close to Stratumseind, the street with many bars. So it’s the perfect location for a good meal before going out.
Vegan Junk Food Bar Eindhoven has 2 floors (and toilets in the basement). They also have a terrace where you can sit outside on sunny days.
The interior is similar to other VJFB restaurants; with pink walls with black graffiti letters. You’ll see wooden tables and wicker chairs. I also love the pink neon letters on the first floor saying ‘Being a carnivore is just a phase’.

On the menu of VJFB Eindhoven you’ll find all the classics that you also find at the other locations.
They’ve got starters/bites like wings, schrimpz and kalamariz rings. They also have several kinds of bitterballs, like mac&cheese and Thai Chik’n.
For the main dishes they’ve got two categories: Loaded Fries and Burgers.
They’ve got six different kinds of loaded fries, but my favorite is the vegan kapsalon. And many of my carnivore friends love it too, one said it tastes better than the meat-version!
The burgers at Vegan Junk Food Bar are one of the best vegan burgers I ever had. Their ‘cheeze’ is even tastier than most dairy-based cheeses.
They’ve also got fries to go with your burger, and three salads.
You’re probably not hungry anymore after your dinner, but for big eaters they’ve also got three kinds of vegan desserts. The Chocozito with dark chocolate cream is my favorite.

The VJFB in Eindhoven is open from Wednesday to Sunday. On Wednesday and Thursday they’re open from 3pm tot 10pm and on Friday, Saturday and Sunday they open at noon.
You can’t reserve your table at Vegan Junk Food Bar, so just walk in when you’re hungry!

Click here for all my favorite vegan restaurants in Eindhoven.