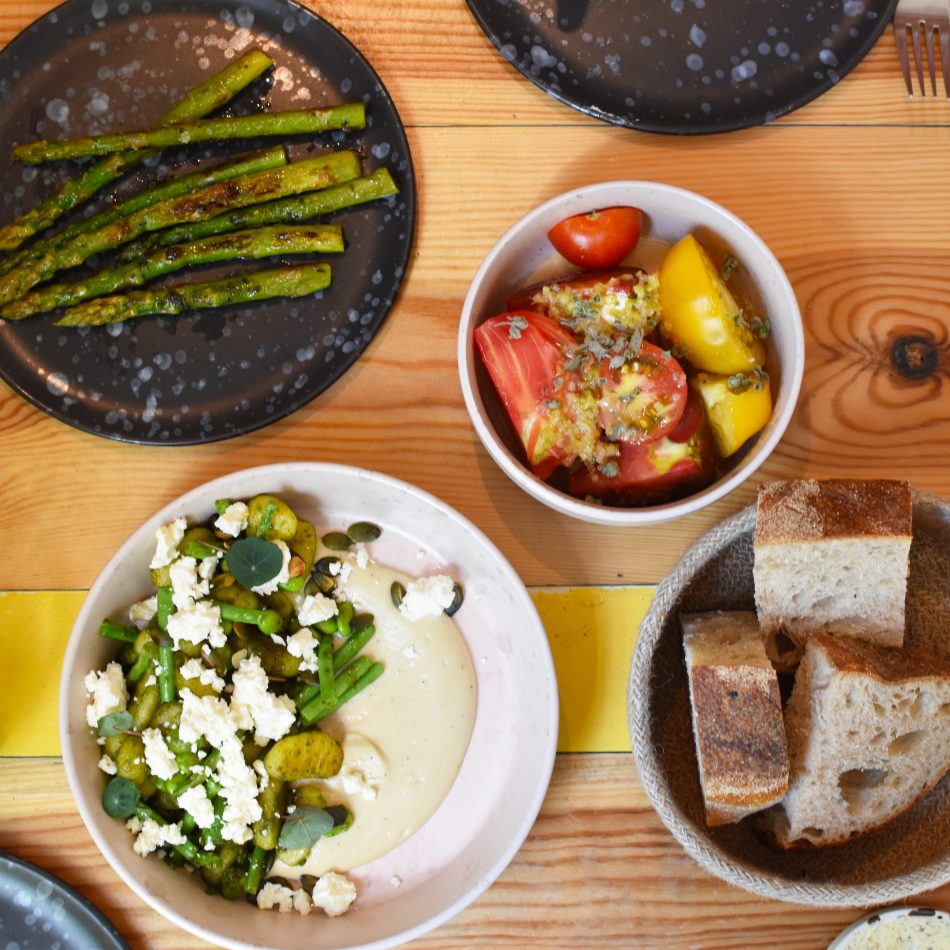 During my trip to Northern England I also spend some time in Leeds. It’s a great city with many Instagrammable spots and a lot of great food spots. On this page I’ve listed my personal best vegetarian and vegan food spots in Leeds.

Fettle Cafe is located a few blocks North-West of the busy city centre, so not many tourists find this place. It’s a real hidden gem! You order small plates at Fettle, about 3 to 4 for two people. Most of the dishes are vegetarian or vegan and sometimes you can add some meat if desired.
We had green asparagus with seaweed butter, bread with seaweed butter (yes we really liked the seaweed butter), heritage tomatoes with rhubarb and elderflower and gnocchi with cashew cream, edamame, pesto and feta. You can skip the feta for a vegan version. This last dish was an absolute favorite of mine. I’ll try to recreate it soon!

Knave’s Kitchen is a 100% vegan food spot located in Oporto. Oporto is a bar than often has live music or dj’s, and you can order your food from Knave’s Kitchen at the bar. On their menu you find all kinds of vegan junk food dishes like cornflake-battered ‘chicken’ tortillas and grilled seitan with hummus and smoked chili sauce. I went for their ‘Sea Sheppard’; beer-battered Nori tofu fillet with mushy pea-mayo, crisp baby gem in a salt and vinegar bun.

Every last weekend of the month from March to November there’s a market at Kirkstall Abbey. It’s one of the most impressive backgrounds for a market that you’ve ever seen. The market stalls are different every month but there’s always a large variety. From tea to home-baked cookies and from jewelry to toys: there’s something for everyone. I had this pita with vegetarian gyros from Knead Pitta when I was there.

Humpit is a Hummus and Pita bar that is 100% vegan. Besides their restaurant in Leeds, you can find them in many other cities like Manchester, York and Newcastle. In Leeds you can find them in the Leeds Corn Exchange and at the University. On the menu ar 4 plant-based main dishes; a pita with hummus and falafel, a salad with hummus and falafel, a hummus bowl with pita bread and vegan shakshuka with tomato sauce and aubergine. They also have several sides like sweet potato fries and roasted cauliflower.

Cantina was the first full vegan eatery in Leeds. You can find Cantina at the Old Red Bus Station on Vicar lane. The menu has a large variety of vegan food on offer. From a healthy quinoa salad to Mac ‘n Cheese with a cashew cheeze and mushroom mince. They have a pizza, smoked ‘salmon’ and a vegan curry; just to show how varied their menu is. So there’s something for everyone!

I have to admit that I went to the Ivy Leeds for the Instagrammable interior, but when I was there I found out that they have a special vegetarian and vegan menu. With 5 different starters, 5 different mains and a whole lot of nibbles and appetizers; there was really a lot to choose from! They have a delicious vegan sweet potato curry!

Simpatico Pizza is located in the Queens Arcade. It might look like a small pizzeria when you enter, but there’s a lot more room upstairs.
After the owners spend some time in Rome, they wanted to bring the Roman Pizza al Taglio to Leeds. They use local or Italian ingredients and sell their pizza’s by the slice. When I was there they had a vegetarian pizza with cauliflower and pecorino and a vegan pizza with a hummus base, courgette flowers, olives and artichoke. But their menu changes quite regularly, so just have a look whats on display when you’re there!

Other nice vegetarian and vegan food spots in Leeds:

Click here for my blog post on Instagrammable Leeds so you’ll see al the top sights during your time in Leeds.