Vegetarian and vegan food in Tokyo 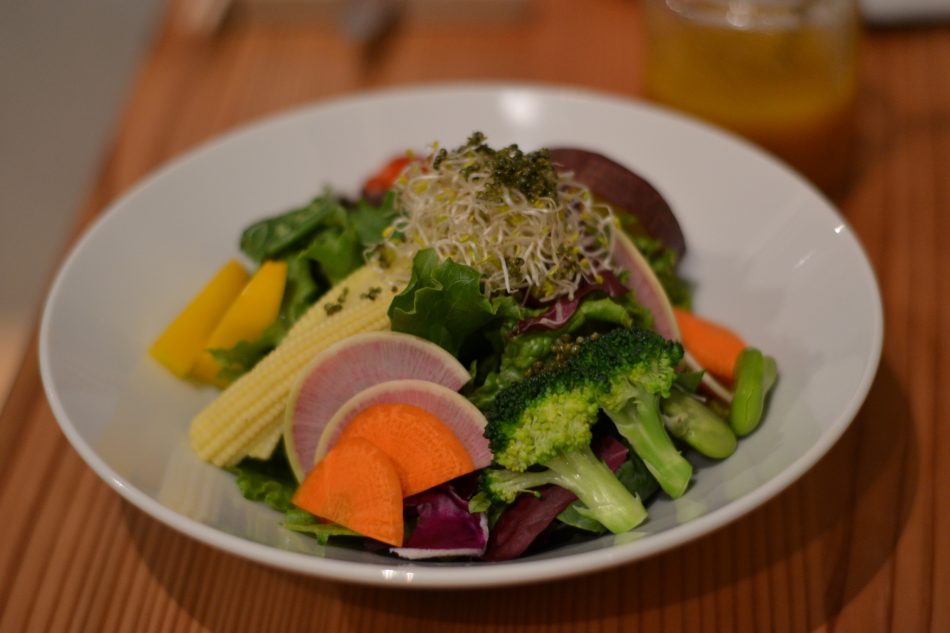 If you’re a pescetarian (you don’t eat meat but you do eat fish), you’ll have no problem eating well in Japan, as you can probably find more dishes containing fish than meat. But if you’re a vegetarian or vegan you might  need to search a bit harder. No need to worry, there are definitely vegetarian and vegan food options and restaurants in Tokyo. On this page I’m sharing my favorites with you as well as some general tips. Vegetarian breakfast and lunch are easy to get in Tokyo. Although the Japanese will have a rice dish for breakfast, you can go for a Western style breakfast that has more vegetarian options. There are quite a few bakeries in Tokyo, especially in and around train and metro stations. Check my list of favorite bakeries and their locations. Supermarkets will also sell many vegetarian options, although mostly not very healthy ones (expect donuts, waffles and pancakes). For dinner it can be a bit more difficult,  especially when the menu is in Japanese and the staff knows limited English.  It might be smart to look for restaurants with an English menu, as this makes it easier for you to make your request understood. Almost every restaurant has some vegetarian dishes, but you might need to settle for a bit less variety. Every sushi restaurant for example will have a few rolls with tofu or omelet, or a side dish of soy beans. The yakitori restaurants will also have some vegetable skewers, for example with shiitake (Japanese mushrooms), soy beans or green peppers. You’ll be able to get a ramen (Japanese noodle dish) with tofu and/or vegetables, but the stock is often made of pork. You can also go to one of the few vegetarian restaurants in Tokyo, for a more varied vegetarian dinner.
My favorite is Ain Soph. They have 4 branches in Tokyo. In Ginza, Shinjuku, Ikebukuro and Kabukicyo. In Ginza they have a patisserie on the ground floor and a restaurant open for lunch and dinner on the 2nd, 3rd and 4th floor. They have tasty dishes on their menu like a curry, a mushroom rice dish and tomato and vegetable soup. They also have a vegan cheese fondue. Pictured above is their tortilla roll with lettuce, avocado and sundried tomatoes it’s served with tortilla chips.

Vegan restaurants
If you’re eating vegan it might be difficult to eat at a regular restaurant in Japan. Since it’s often difficult to make yourself understood, you’re never sure if the dish is 100% vegan.
In the supermarkets and small self cater shops are often some vegan options but the label aren’t in English, so again you’re not a 100% sure. I sometimes had a seaweed Onigiri (a triangle shaped rice ball) in the supermarkets that is vegan.

Restaurant 8ablish is 100% vegan. They’re open for breakfast, lunch and dinner and has a very good lunch deal. For ¥1500 (15€/$) you’ll get the daily special with rice or bread and a side salad. For dinner they have an extensive menu including delicious desserts like a chocolate cake with vegan vanilla ice cream!
They’re located on the 2nd floor of a modern building near Omotesando Station. In the same area you’ll find Brown Rice Canteen, a café that is located in the Neal’s Yard store.  Neal’s Yard Remedies originated in London, but has a couple of stores worldwide nowadays of which one in Tokyo.  Neal’s Yard sells organic health and beauty products in one building and has a café in the other one with a nice courtyard in between for sunny days. The Brown Rice Canteen is only open for lunch and they serve 3 set menus (all vegan!). They often have steamed seasonal vegetables with brown rice and a vegan curry. Cityshop is more a deli than a restaurant and not a 100% vegan. But they have many vegan options! It’s like a salad bar where you can create your own meal. And they have plenty choice for vegans as they have many fresh vegetables, grains and superfoods. They also have many pre-packed salads of which at least one (but often 2 or 3) are vegan.
A salad with bread and coffee or tea will cost about ¥1500, a decent price since the portions are big.