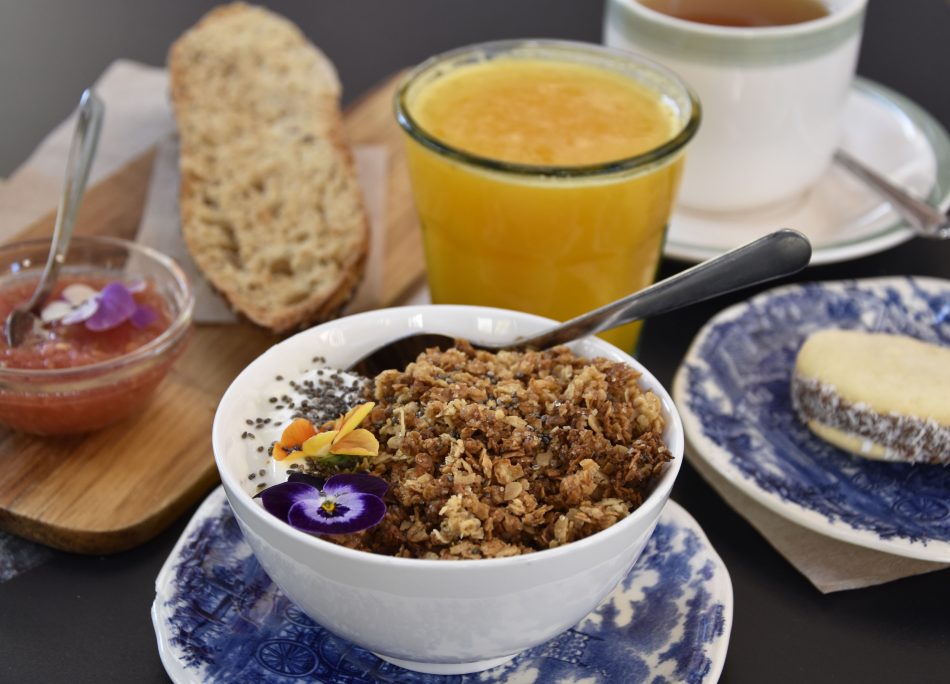 Bodhigreen is a totally vegetarian restaurant in Alicante. So all the dishes on the menu of Bodhigreen are meat-free and fish-free. They also have many vegan dishes that are clearly marked on the menu (as well as the gluten-free options by the way). Pictured you see one of their vegetarian sandwiches with pesto, olives, avocado, onion and feta cheese. Vegetarian restaurant Bodhigreen in Alicante is open for lunch and dinner.

Purpura Project is a vegan restaurant in Alicante. They’re open for lunch and everything on their menu is vegan. And it’s not only that; their kitchen is also entirely gluten-free and they only use organic products. They also have vegan and glutenfree desserts and vegan wines.

La Folie has two restaurants, almost next to each other. One serves hamburgers and the other serves hotdogs. Both restaurants have a vegan version of their signature dish. Pictured you see ‘Pitagoras’, the vegan hotdog fo La Folie. It has a vegan sausage and vegan sauce. It’s served with crisps and salsa.

As the name suggests Vegan Bombon sin Gluten is a 100% vegan and gluten-free food spot in Alicante. They sell all kinds of sweets like cakes, pies and cupcakes. Everything that’s sold at this bakery is 100% plant-based and free of gluten. They’re open during the day, then closed for a couple of hours in the afternoon and they open up again in the evening. They’re closed on Sunday and Monday.

Maldita Gloria! is one of my favorite restaurants in Alicante. It has a super cute interior, is run by a passionate staff and almost everything is homemade. They have two delicious vegetarian toasts and their homemade granola is is one of the best I’ve ever had. Their Brunch Deal is also completely vegetarian. For just 10,- you get a cup of coffee or tea, a glass of orange juice, a bowl with their homemade granola and yoghurt, a caramel cookie or croissant and a big slice of toast with toppings.
I didn’t see any vegan options on the menu, but they can probably arrange something if desired.

Panther Juice & Sandwich market focusses on healthy meals. They’ve got sandwiches, smoothie bowls, salads and juices. I went for their vegetarian Avocado Capresse sandwich with avocado, pesto, mozzarella and tomato. The smoothie bowls are all vegetarian and vegan (if you skip the honey) as they’re made with coconut milk (or acai) with fruit.

Mish Mish is an Middle-Eastern restaurant and many dishes in the Middle-Eastern/Arabic kitchen are vegetarian or vegan. They focus on Lebanese food but also have other Middle-Eastern dishes. My recommendation is that you order some mezzas to share with your table. Vegan options include their hummus, muhammarah, baba ganush, Damascus Spinach and diced crispy potatoes.

La Casa de Leo is a great restaurant if your company exists of vegetarians and meat lovers as this restaurant caters to both. It has cod fish with vegetables for example but also a great vegan burger. And I love the location of restaurant La Casa de Leo, it’s right on the corner of two of the liveliest streets in Alicante with many terraces. Going out for dinner on the weekend? Then it’s smart to reserve your table at La Casa de Leo by calling +34 865 71 52 26.

Not super vegetarian or vegan friendly per se, but the location of Miramar is wonderful. It’s located right at Playa del Postiguet, the beautiful beach of Alicante. They offer breakfast, lunch and dinner. Some of the vegetarian options are this granola with yogurt and fruit, patatas bravas and Arroz Verdura.

Click here for all my travel blogs on Spain.