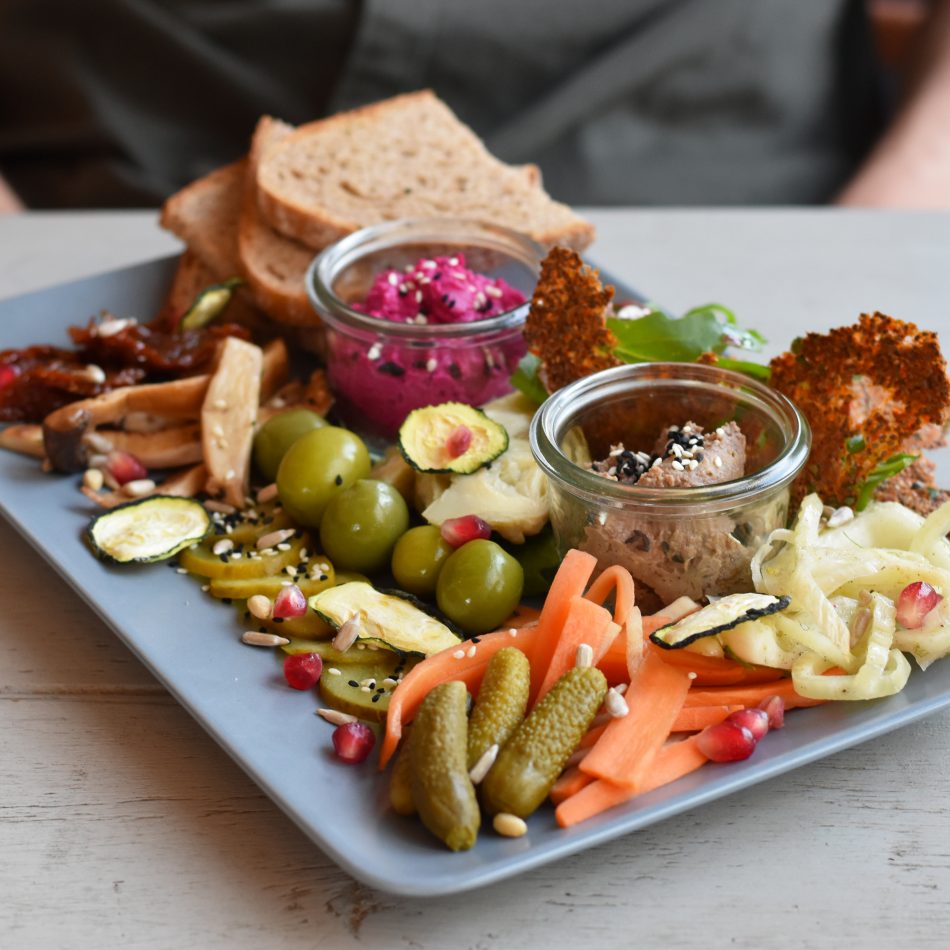 Berlin is often referred to as the veggie capital of the world; and rightfully so. There are so many vegetarian and vegan restaurants in Berlin! I’ve listed all my favorite vegetarian and vegan food spots in the German capital on this page.
Whether you crave a veggie burger or a vegan cake; this blog will show you all the best vega(n) restaurants. Cafe Botanico is Berlin’s best kept secret. It’s a bit tucked away in South-East Berlin and if you’re standing in front of it, you might think it can’t be much good. Don’t be fooled, behind this ordinary facade is a magical place: a 1000 square meter garden where herbs, fruits and vegetables grow. The chef cooks Italian dishes with as many ingredients from the garden as possible. It can’t get more local than this! Click here to read more about Cafe Botanico in Berlin. Wilde Küche is a vegetarian and vegan restaurant. The restaurant (and beer garden!) works with regional products, fresh and untreated fruits and vegetables and they don’t use any refined sugars. Pictured here is their Buddha Bowl with chickpeas, beetroot hummus, peanut sauce, tempeh and much more. On the top of this page you see a picture of their Anti Pasti plate that you can share, amongst other things you’ll find artichokes, olives, sun-dried tomatoes and 2 vegan spreads on it. Click here to read more about Wilde Küche. Lia’s kitchen is a 100% vegan burger bar in Berlin. As you might know, I love veggie burgers! I’ve shared several vegan and vegetarian burger recipes on my blog and I even went on a quest to find the best veggie burger of Amsterdam. If I were to go on a quest for the best vegan burger of Berlin, Lia’s kitchen would be my number one! They have 4 different burgers, all 100% vegan. Pictured is their Smokey BBQ mushroom burger with a portobello mushroom patty and maple smoked BBQ sauce. I ordered mine with sweet potato fries and vegan coleslaw. They also have several salad bowls that are big enough for a main course, so you can also pick something a bit more healthy at Lia’s Kitchen like their Quinoa, Berries and Nuts salad bowl or their vegan Chicken Stripes salad. Eating vegan doesn’t always have to be healthy, you can eat plant-based and still eat cake! I already proved with my vegan coffee cheesecake recipe and my vegan Baileys cheesecake recipe, but Velicious also proves that vegan cake is super tasty!
Velicious Cafe is a vegan coffee shop very close to Ostkreuz train station. They always have a variety of vegan cakes to go with your coffee or vegan soda. I had this ‘cassis cheesecake’ with blackberries. Velicious also serves many gluten free (and vegan) cakes! Shopping mall Bikini Berlin, next to the Zoo, is a great spot to visit. Especially on a rainy day! This shopping center has a sleek design and many great shops and restaurants. On the ground floor you’ll find Funk You Natural Food where you can get juices, breakfastbowls and salads. If you go to the rooftop you’ll find The Dawg, a restaurant with gourmet hot dogs. All the hotdogs at The Dawg are also available in a vegetarian version! Pictured is the vegetarian version of the French Bull Dawg, a vegetarian sausage on walnut bread with gorgonzola and pickles. If the weather is nice you can sit outside at The Dawg and watch the monkey rock of the Berlin Zoo. Mana is a healthy, vegan restaurant in Berlin’s Schöneberg neighborhood. They’re open for lunch and dinner and have a vegan brunch on Sundays. On the menu you’ll find soups, salads, burgers and bowls that are all vegan. They’re mostly known for their Mana Bowls, healthy vegan bowls that are a satisfying lunch or dinner. I had the Stay Active bowl with hummus, quinoa and a big falafel ball that’s one of the best I ever had.

Click here for the best falafel spots around the world. Goodies Berlin is a deli where you can order tasty and healthy food to-go or to stay. Everything on the menu is vegetarian and most of the dishes are vegan. They also have many gluten-free options. Goodies has several breakfast and lunch bowls and wraps and sandwiches. They also have several sweets. Pictured is the acai bowl with vegan and sugar-free granola and I had a peanut butter chocolate protein bite as a dessert.

Can’t get enough? Check out the extended overview of vegetarian and vegan restaurants in Berlin by Visit Berlin.

Did you know that Berlin even has a vegetarian hotel with a vegetarian and vegan breakfast buffet? Click here to read all about Hotel Almodovar.

My trip to Berlin was arranged together with Visit Berlin and Germany Travel. All opinions are my own.