Prettiest libraries and bookshops in the Netherlands 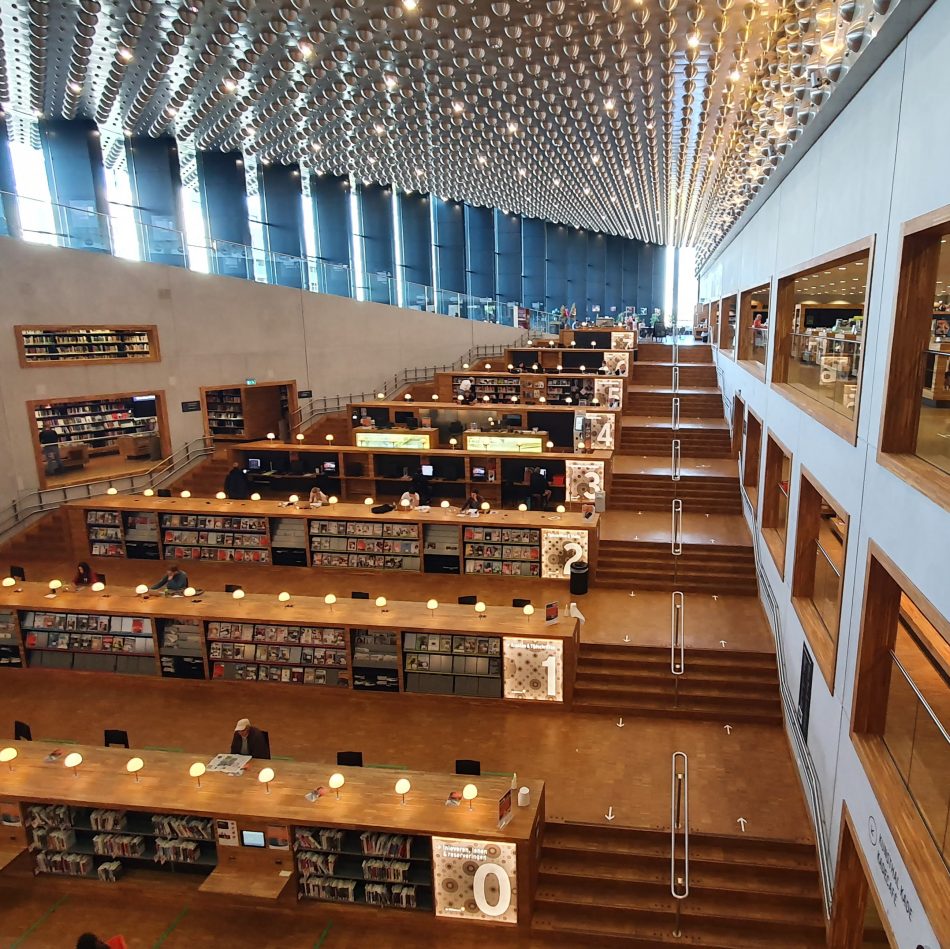 I’m starting with the library in my hometown Tilburg. The library is housed in a building called the Lochal, in the Spoorzone area. In this big former locomotive factory you can find the public library as well as other companies. It has a small cafe on the ground floor where you can order coffee or lunch. The children’s section of the library in Tilburg is designed by theme-park De Efteling. The huge textiles that you can find all over the building are a reference to the cities former main economy and are real eye-catchers.
A Dutch newspaper called the Lochal the Centre Pompidou of Tilburg. I can see why!

The Eemland Library can be found in Amersfoort and it’s one of my favourite Instagram spots in Amersfoort. I love libraries and book shops in general (hence this blog post), but the Eemland library in Amersfoort is next-level with its futuristic design, an aluminium roof and different terraces where you can read and work.

Have you ever been to Almere in Flevoland? All the architecture there is super new as the province itself only exists for a few decades. Everything you see in Almere was build in the last 40 years. This makes for some real interesting works of architecture. This library in Almere for example is really worth a visit. It’s called De Nieuwe Bibliotheek, meaning: the New Library. It’s open to the public so you can just take the escalators up and have a look around. The building itself is designed with straight lines and sharp corners. And the interior design has the opposite, it has all soft and round shapes. Even the stairs have the shape of a wave and all the book stands are curved.

Everything that is said in the Dutch parliament is written down in so called ‘handelingen’ and all those written reports are collected in the Handelingenkamer. As of 1990 the reports are all digital so you’ll find reports from 1814 up until 1990 in this room. The building in The Hague used to be the library of the Ministry of Justice. The room is 9 meters high. It’s designed by a Dutch architect in 1876 and has many Chinese influences.  Unfortunately it’s only open to the public yearly on Open Monuments day in September.

There’s a bookshop in a church in the Netherlands! It’s called bookshop Dominicanen and you can find it in Maastricht in the South of the Netherlands. The book shop is housed in a former church. The Dominicaner Church is over 700 years old and the bookshop houses thousands of books in this unique building. The Dominicanen bookshops also hosts many activities, so check their agenda to see if anything is happening anytime soon.

There’s another bookshop in a church in the Netherlands. The bookshop is called Waanders in de Broeren and you can find it in Zwolle, in the East of the Netherlands. Waanders in de Broeren is housed in a former church, but it’s been completely renovated. You still see the old vaults and stained glass windows but it also has a modern interior. This makes the bookshop in Zwolle a very serene place to pick your newest book.

I don’t know if there are many reasons for visiting Spijkenisse, but their library sure is one. It’s called De Boekenberg and this ‘book mountain’ is quite literally. It has a large glass exterior that reminds me of a greenhouse. And the books on the inside are divided over three floors in the shape of a mountain. The library regularly organises events and workshops.

Click here for the prettiest libraries and bookshops of the world.