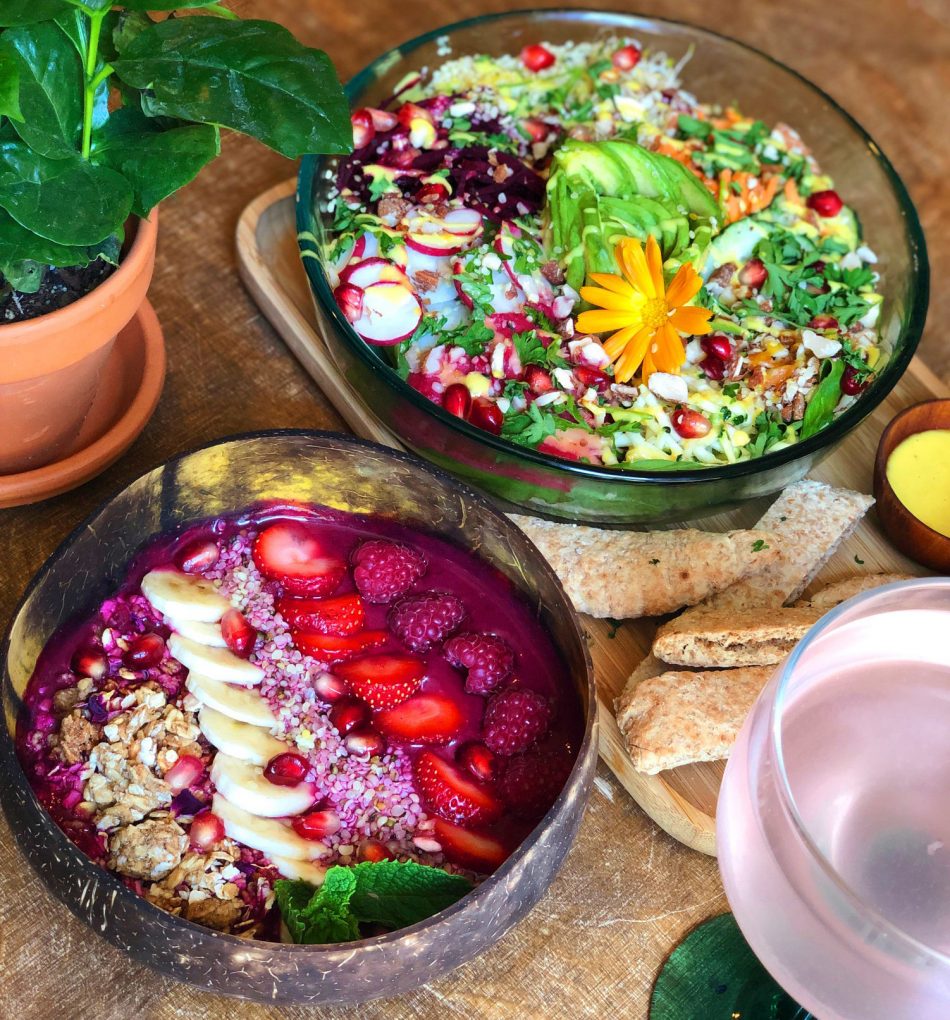 Eating vegan in Den Bosch (or ‘s-Hertogenbosch as it’s officially called) can be quite a challenge. In surrounding cities like Tilburg and Eindhoven you find quite a few 100% vegan or vegan-friendly restaurants, but in Den Bosch you have to search a bit harder. I’m helping you out on this page with all vegan and vegan-friendly food spots in Den Bosch. Whether you’re looking for a place for breakfast, lunch or dinner; I’ve got you covered on this page.

Oerwoud was the first 100% vegan restaurant in Den Bosch. Oerwoud means jungle, and you actually felt like you’re in the jungle when you were there. Oerwoud was an ‘urban garden shop’ and health cafe wrapped in one.
Please note: due the Corona crisis Oerwoud has closed its doors. It’s unclear if they’ll open up again in the future. Their vegan sister Plant has also closed its doors.

Noemme is a so called ‘flexitarian’ restaurant. They’ve got plenty of vegan and vegetarian options, but also some meat and fish dishes. Their focus however is on their vega(n) dishes. On their menu are dishes like Indian Dahl soup and Pulled Oats Wellington. They also have many vegan wines that you can order by the glass. During the lockdown they have these delicious vegan brunch boxes (that are gluten-free too) and 3 or 4 course dinners with vegan options for at home.

Nul73 stands for the area code of Den Bosch (073). Nul73 is open for lunch and dinner and has many vegan options on their menu that are all clearly market with a red leaf on their menu (the vegetarian options have a green leaf). I really wanted to try every vegan dish on the menu. The’ve got vegan bitterballen, vegan kapsalon, vegan tempeh salad, vegan gado gado and more. They even have vegan tiramisu and vegan crème brûlée.

Yalla Yalla foodbar and bakery in Den Bosch is a small eatery that focusses on Middle Eastern Cuisine. Their hummus is of course vegan, but they can also make a good vegan wrap with falafel and they even have vegan baklava without honey! They’re open for dinner 7 days a week and also serve lunch on Saturdays and Sundays.

Poke Perfect is a small poke bowl restaurant in the city center of Den Bosch, close to the central market square. You can order your poke bowl to go, or sit down at one of the tables. Because you can build your own bowl and they’ve got many ingredients to choose from, you can easily create a vegan bowl. But they’ve also got three vegan signature bowls. Pictured you see the ‘You Make Miso Happy’ with sushi rice, miso glazed eggplant, edamame beans, red beet and carrots mixed in our Miso Tahini sauce topped off with crispy fries and sesame seeds.

Voltaire in Den Bosch is open for breakfast, lunch and coffee with cake. They’ve got a few vegan options on the menu.
They’re open from 9am to 5pm.

Coffeelab is a cafe specialized in coffee and tea. They also serve lunch and cakes. They’ve got no less than 4 plant-based milk alternatives: soy, oat, coconut and almond. Their yogurt breakfast bowl can be ordered with soy yogurt and they’ve got a plant-based acai bowl. Their kale salad with pearl couscous, kale, pumpkin hummus and grilled vegetables is my favorite lunch dish. And they sell all kinds of vegan cakes and cookies from Van Planten. You can find Coffeelab right across the train station in Den Bosch.

Creme is open for breakfast, lunch and dinner and they have several vegan dishes on the menu. For breakfast they have two different vegan smoothie bowls; an espresso smoothie bowl and the breakfast smoothie bowl pictured above. It’s made with banana, raspberry, blackberry and oat milk. On their lunch menu are 8 vegetarian items of which roughly half is also vegan. For dinner Creme works with a shared dining concept, making it a bit more difficult to eat vegan as the dishes are smaller. Nevertheless they have a few vegan dishes like vegetables and tofu with teriyaki sauce.

Fifty Fifty understands people who want to eat healthy most of the time but also want to cheat sometimes. So their menu is divided in a ‘healthy’ and a ‘guilty’ part. On the healthy part you can find 2 vegan dishes; a crispy tempeh taco and a rice bowl with jackfruit. Be aware that they also have a plant logo in front of the Greek Taco, but that contains halloumi cheese so it isn’t vegan.

Gossimijne also serves fish and meat but they do have a few good vegan options on the menu as well. And as the vegan dishes are clearly marked on the menu, I’ve decided to listed them on this page too. As vegan starters you can go for the Spinach Salad or the Mushroom ‘meat’. They always have three vegetarian options that can also be ordered vegan; a vegetable lasagna with soy cream, Chili Sin Carne and a weekly changing vegetarian/vegan dish. They’ve got a vegan dame blanche on the menu for dessert. Gossimijne also has a tapas menu with more than 10 different vegan tapas.
You can find Gossimijne in 6 other towns in the Netherlands, including Oss and Uden. Please note that Gossimijne in Den Bosch isn’t open for lunch, only for dinner.

Go Greens is a take-away and delivery food spot that offers vegetarian and vegan dishes in Den Bosch. Everything on their menu is vegetarian and most items are vegan too. The vegan tjap-tjoy is my favorite.
Click here to order Go Greens for delivery.

Yoghurt Barn is 100% vegetarian and also has many vegan options. You can order all their yogurts with one of the plant-based yogurts available. They’ve got vegan sweets from SharpSharp and as of the autumn 2019 they serve a vegan high tea!
You can find Yoghurt Barn in many other cities in the Netherlands including Haarlem, Utrecht and Leiden.