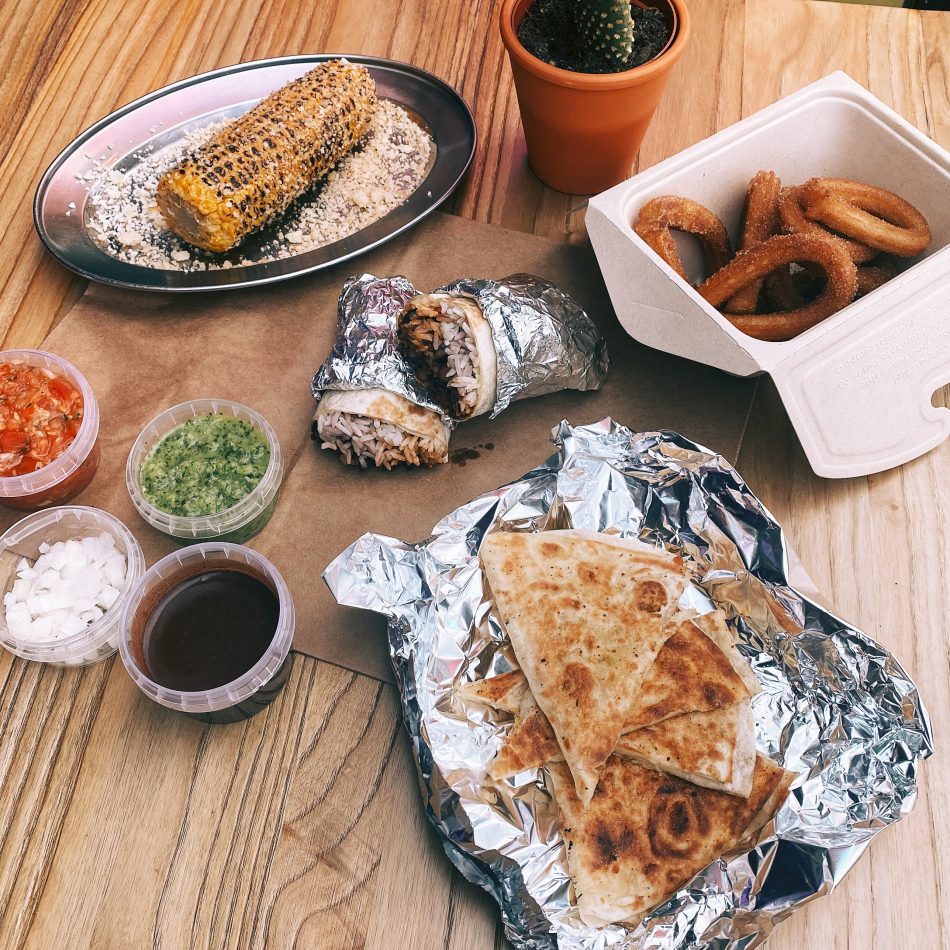 On January 1st 2021 Cigkoftepoint Tilburg opened up. This take-away and delivery restaurant sells a vegan version of the Turkish Cigköfte. Cigköfte is normally a meat dish but Cigkoftepoint Tilburg sells a vegan version. They have three different sizes of vegan Cigkofte platters and they also sell vegan cigkofte durum. Besides the vegan Cigköfte dishes, they also sell vegan sushi. You can order separate rolls of your choice, or go for the box with all varieties.

De Kraan is a new restaurant that opened up on January 28 2021 in Club Smederij. They offer Mexican street-food for take-away and delivery. They’ve got great tacos and burritos. My tip: try the corn on the cob with cheese, it’s delicious! And I always order some nachos to go with my dinner.

Tasty Saigon is a Vietnamese restaurant that is located at the Lieve Vrouweplein. It’s a take-out and delivery restaurant that serves all kinds of dishes from Vietnam. Like the famous Bahn Mi baguette, springrolls, pho and noodles. They’re open for lunch and dinner on every day except Tuesday.

On March 1 Broodega opened up its door in the city center of Tilburg. You can find them next to Intermezzo on the Heuvelring. They sell artisan bread, sandwiches and panini’s. And delicious smoothies to go with it.

Mon-O Fastfood is a new vegan fastfood restaurant in Tilburg. They opened up in March 2021 for delivery. They’re a pop-up kitchen that was there until June 19th. But hopefully they’ll come back again later. They deliver mouth-watering vegan dishes like vegan burgers, vegan kapsalon and sweet potato fries.

Loos! is a bar located in the Spoorpark. They will open up as soon as the lockdown ends. You can find Loos! (named after the Gend&Loos company that used to be located there) at the Ringbaan West side of the Spoorpark. It’s surrounded by the beach volley fields. So you can relax with a cold beer after playing a game of beach volley.

Softys opened up in an empty part of restaurant De Wagon in 2020. But in 2021 they’ll open up a second store in the city center of Tilburg. You’ll be able to find them on the corner of the Oude Markt and Heuvel. They open on April 2 2021.

Trap Kitchen just opened up in Tilburg. They offer Caribbean dishes like shrimp curry and spicy garlic butter pasta. They’ll announce their weekly changing menus on Instagram each week and you can also order your dishes by sending Trap Kitchen Tilburg a DM on their Instagram account.

Besides Tasty Saigon, another new Vietnamese food spot opened up in Tilburg in 2021. No. 16 is a Vietnamese catering and delivery restaurant. No. 16 used to have a pop-up restaurant in the Klasse Theater in Tilburg East in 2018, and now they’re back. They’ve got all kinds of dishes from Vietnam like spring rolls, banh mi sandwiches and Pho. They deliver in Tilburg (the Reeshof is included) on Thursdays and in Hilvarenbeek, Goirle, Berkel Enschot and Oisterwijk on Fridays.

The American burger chain Wayback Burgers opened up in Tilburg on April 19 2021. They already have a restaurant in Breda and Tilburg is the second city in the Netherlands where they’ve opened up. On the menu are burgers (of course) but also vegetarian burgers, fries, chicken wings and milkshakes. They’re located at the Schouwburgring and are open for delivery as well.

Green Bakery will make vegan frozen foods that you can pick up for at home. You can save the foods from Green Bakery in your freezer at home and warm up in the oven when you want to enjoy them. They’ll focus on vegan pizzas at the start.

Dadawan already has several restaurants in the Netherlands in cities like Eindhoven. They’ll open up a restaurant in Tilburg in 2021. They’ll open up in the former Midi cinema building on the Heuvelring. And the restaurant will be very unique as there will be robots as waiters!
Click here to read more about robot restaurant Dadawan in Tilburg.

Phamily’s Kitchen is a new take-away restaurant that opened up in the Reeshof on July 4th 2021. They sell Asian dishes for picking up. Every week they have a new menu with Asian street-food items. They don’t only serve main dishes, but snacks and desserts as well.

Restaurant ZJUU will open up in the Leijpark, on the place where Restaurant Etenstijd used to be. It’ll be open for brunch and ‘borrel’ (drinks). ZJUU is a concept from Tuinhuis Culinair that you can find in Tilburg West. ZJUU hopes to open up in the summer of 2021.

Kitch opened up on the corner of the Heuvel and the Pieter Vreedeplein, where Grillig used to be. They combine the Western and Asian cuisine. They’re open for lunch and dinner. On the lunch menu you’ll find sushi, soup, salads and sandwiches. Unfortunately for vegetarians like me, they only serve meat and fish dishes for dinner (and, alright, a few vegetarian side dishes). For lunch they do have a vegetarian sandwich with avocado and egg, a burrata salad and two vegetarian soups.

In October 2021 restaurant Hooked opened up in Tilburg. They’ve opened up on the Korte Heuvel, where Greek restaurant Zorba used to be. Brainchild behind Hooked is Giel van Schaaijk that also owns Restaurant Rak and T Huis in the Spoorpark. Giel says he’s got his inspiration for Hooked from Barcelona. It’s a restaurant where you can snack and ‘borrel’ on a higher culinary level (think oysters and gamba’s). It’s open for dinner and drinks and has a Mediterranean cuisine.

Oni Oki opened up on the Berkijksestraat in Tilburg. They serve Indonesian specialities like nasi, gado gado and saté. It’s not a restaurant where you can sit down, but it’s open for take-away. They also offer catering.

Rosalie opened up on the Korte Heuvel in Tilburg where Miss Bien Chanternel used to be. Their concept is to cook on open fire with many vegetables, fresh fish and high quality, local meat. They’re open for lunch, dinner and drinks. The’ve got natural wines and many beers. The owners are three friends with a lot of restaurant and bar experience, so I’m sure Rosalie will be a big success.

IA Foodbar will open up on the Heuvelring, where Ferris Foodbar used to be. IA Foodbar is from the owner of sushi restaurant MOJO Tilburg. IA Foodbar won’t be offering sushi, but it’ll be a bar that’s open on Friday and Saturday for cocktails and bites.

CARGO Bikes ‘n Coffee will open up at the Nieuwlandstraat. It’s a coffee and bike shop run by two Dutch man and the Argentinian wife of one of them. You see the Argentinian influence on the menu as they will also serve empanadas.

In the former Harmoniegebouw in de Stationsstraat a new cafe/lunchroom will open up. It’ll be run by Lucas Smits, whom you might know as The Wasted Chef. Besides being a chef that you can book for a dinner at home, Lucas has a lot of experience in several restaurants in Tilburg.

On the Pieter Vreedeplein in Tilburg, where burgerbar Five Guys used to be, BLU Seafood bar will open up. Now that Restaurant de Visserij is closed, this will be the new spot to enjoy seafood. From Fruits de Mer to oysters; BLU will serve them all. They plan to open up in December 2021.