New restaurants in Tilburg in 2022 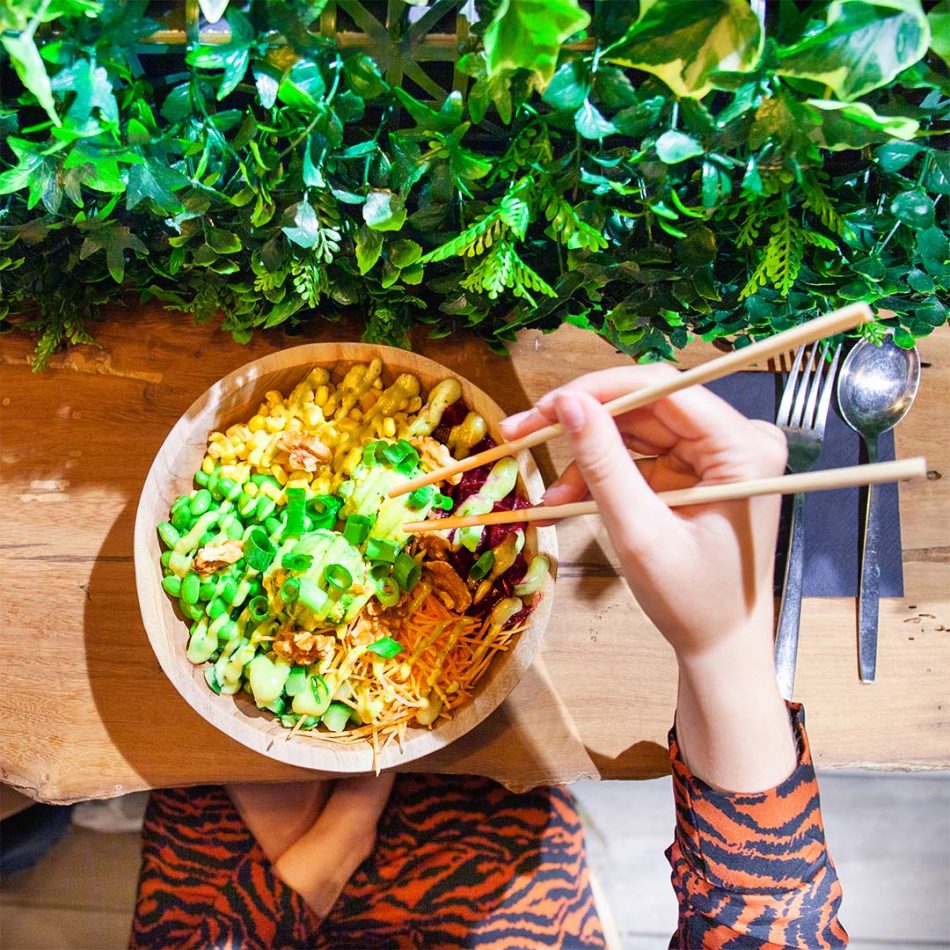 Click here for all restaurants that opened up in 2021 in Tilburg.

Hawaiian Poke bowl is a concept from Belgium and in januari 2022 they’ve opened up a restaurant at the Pieter Vreedeplein in Tilburg. The restaurant walls are covered with green leaves to make you feel like you’re in Hawaii. You can eat-in, take-out or have your poke bowl delivered.

Pork & Potatoes is a new concept from Thomas Inderfurth from Eethuis Twintig. They’re the newest food stand of Gourmet Market Central Station in Tilburg. They sell spare ribs ‘Bogey’s style’ (if you’ve been living in Tilburg for a while, you might remember them) and all kinds of stuffed potatoes. Don’t be fooled by the name, they’ve got vegetarian options too.

Click here for all the food stands in Gourmet Market Central Station.

On the Pieter Vreedeplein in Tilburg, where burgerbar Five Guys used to be, BLU Seafood bar has opened up. Now that Restaurant de Visserij is closed, this is the new spot to enjoy seafood. From Fruits de Mer to fresh oysters and lobsters; BLU serves them all. You can choose from the a la carte menu or go for one of their set menus. They’ve also got a good lunch menu and kids’ dishes. For carnivores they’ve got meat dishes like Surf and Turf and tournedos, and for vegetarians they’ve got a very tasty truffle pasta.
Please note: at the end of 2022 BLU has decided to open up with a new concept, and they’re not a seafood focussed restaurant anymore.

JP kitchen is a new food stand at the Gourmet Market Central Station, they serve West African food. So dishes from Morocco, Senegal, Gambia and Cape Verde. Expect dishes like lamb chops and chicken with rice.

A new bar is opening up on the Paleisring: Cafe de Buizerd. It’s not a restaurant, but a cafe where you can go for a drink and a dance. They’re not focusing on students, but on the generation above that.

Boxed Healthy Food is a new delivery concept that delivers healthy, protein rich meals. They’ll deliver in Tilburg and Goirle. They’re hoping to start in the spring of 2022.

A new wine bar opened up at the Piusplein. VINE Wine & Dine opened up where Yammy’s and Manana tapas used to be. They have an extensive wine menu with wines from all over the world. And they’ll also have an open kitchen that serves all kinds of matching bites. The menu reminded me of some of my favorite tapas restaurants in Barcelona, with padron peppers, croquetas and charcuterie.

On the spot where the ‘Skiut’ used to be, on the Paleisring, Tilburg’s first Sportsbar will open up. It’s named Papa Jim and it’ll satisfy all sports lovers. It’ll have one big screen and over 20 smaller screens showing all kinds of sports. Several tables will have their own beer tap, so you don’t have to miss a second of the match/race to get a beer. The sportsbar will also serve bar-food.

On the Heuvel The Nacho Bar opened up. They sell all kinds of nacho’s, like classic nacho’s and nacho’s with pulled pork. They even have three vegetarian nacho’s. Maybe they’ll make it to my list of Best Nachos in Tilburg. Besides nacho’s they also sell some street food bites like bao buns. They’ve opened up next to the Pull & Bear on the Heuvel square. The interior alone might be a reason to visit it, it looks amazing! A botanical atmosphere with floral wallpaintings and a long bar.

You’ll feel like Bruce Lee after your lunch from Juice Lee. This cafe with juices, but also healthy wraps and salads, will open up at Factorium. It’s a perfect stop if you’ve got a lesson at Factorium, but they’re open to the publice. So everyone can grab a healthy lunch there and eat it in the park behind it.
Please note: after a very short opening time, Juice Lee is already permanently closed.

Bookshop Gianotten has a beautiful new ‘Boekcafe’. This lunchroom meets coffee shop has a beautiful interior. They’ve got an indoor area, a serre and a terrace. Besides lunch, they also serve breakfast and coffee and tea with cake.

De Ontbijtkeuken already existed for a while. They’re one of the companies where you can order breakfast in Tilburg. But they took over Dwars Hotdogbar this year. And will soon also be open as a breakfast restaurant, also with the name De Ontbijtkeuken.

After owning successful restaurants in Eindhoven and other cities, Eveline Wu opened up a restaurant in Tilburg. She opened a Tilburg location of her Mood restaurant. Mood Tilburg opened up in the Spoorzone, at the place where Restaurant Monchou used to be. Monchou (from the owners of Monarh) never opened up as a restaurant, so the space is brand new. Although the also have other main dishes, they’re mostly popular because of their good sushi. It’s not cheap, but the quality is very high. A sushi boat for 2 people is 65,-.

Not a restaurant, but a place that people that like food and drinks will love. Bij de T is a teashop that opened up at the Nieuwlandstraat. They serve all kinds of speciality teas and accessoires. It’s a great place to get a gift for a tea lover. You can find Bij de T opposite PrinsHeerlijk.

The boat in the Piushaven that used to be a hairdresser and after that housed restaurant Boot 013, is now a new restaurant. Chiel, owner of Restaurant Rak en Hooked, transformed the restaurant to ‘De Belinda’. The restaurant has a seventies/eighties vibe. They don’t have an extensive menu, but a few meat, fish and vegetarian dishes that are great comfort food.

Alma is a food stand that opened up at Gourmet Market Central Station. Alma offers Mexican Soul Food. They opened up on October 1st 2022. They’ve got various kinds of tacos. And I love their guacamole.

Another new food stand at the Gourmet Market Central Station is Em Oi, they serve Vietnamese food. Owner Phung moved from Vietnam to Tilburg to live with her boyfriend and she’ll show all of us her love for Vietnamese food. She also sells the classic Vietnamese sandwich Banh mi.

Anne & Max finally opened up in Tilburg. It’s one of my favorite lunchrooms in the Netherlands, as they have high-quality products and many vegetarian options. And the name also helps of course! They’ve got restaurants all over the country, and also some in Brabant. There’s already an Anne & Max in Eindhoven and in Den Bosch, and I love it that they came to Tilburg too. They’re located in the new Emma Passage.

Another restaurant that already has several other restaurants in the Netherlands and they’ll soon open up on the Oude Markt in Tilburg, opposite Anvers. In this living-room restaurant you can, of course, get all kind of coffee specialties. But you can also have something sweet to go with it, or a nice breakfast or lunch. Everything is also suitable for take-away.

Popular coffee shop chain Coffee Company also opened up in the former Emma Passage in Tilburg in 2022. I often used it as a work place when I lived in Amsterdam. They’ve got good coffee and teas, nice cakes and steady wifi.

Another national restaurant that has opened up in Tilburg is Frites Affairs. Frites Affairs already has several branches all over the Netherlands. They don’t serve the thin French fries, but thick fries with the peel. They’ve also got loaded fries on the menu, for example with chicken satay or the vegetarian Caprese.

Fat Phill’s Diner is an American diner inspired restaurant chain. They already have 7 restaurants in the Netherlands and there’s now a Fat Phill’s Diner in Tilburg too. They’ve got sandwiches, burgers, fries and sides. They’re known for their Philly Cheesesteak, but their burgers are popular too.

Iconic gay bar De Lollipop changed its concept and interior. They’ve opened up again as Capt. J’s Hurricane. They’re still a LGBTQ+ friendly bar, but this time the bar has the vibe of a beach bar. You’ll see the Tikibar theme in the interior, and on the menu. Think cocktails, Latin music and a Polynesian flair.
When there are parties and special events, like Carnaval and the Kermis, Lollipop Outdoor will take place in front of Capt. J’s Hurricane.

You can already find Strada Streetfood in Amsterdam and Amstelveen, and they also opened up in Tilburg in 2022. On the menu you can find pizza’s, pasta’s, focaccias and salads. And make sure to leave some room for dessert as they’ve got the Italian classics Tiramisu and Cannoli. Strada Streetfood Tilburg opened up at the end of 2022 in the area around the Emmapassage, Hendrikhof and Frederikstraat.

Another new restaurant that opened up in the Frederikstraat is Bam! Tilburg. This restaurant opened up in december 2022. They’re open for lunch and bites. And they’ve got a special corner for your kids to play.

Click here for all tips for Tilburg with a baby.

Rooftop Rumour won’t open up in Tilburg until 2023, but as the news is already out there I wanted to add it to this list already. My fellow 013Food member Mirjam Slob was looking for a location for a sustainable rooftopbar for months. And she found a great spot! On the roof of the former V&D (and Hudson’s Bay) building in the city center.