List of all restaurants in the Piushaven in Tilburg 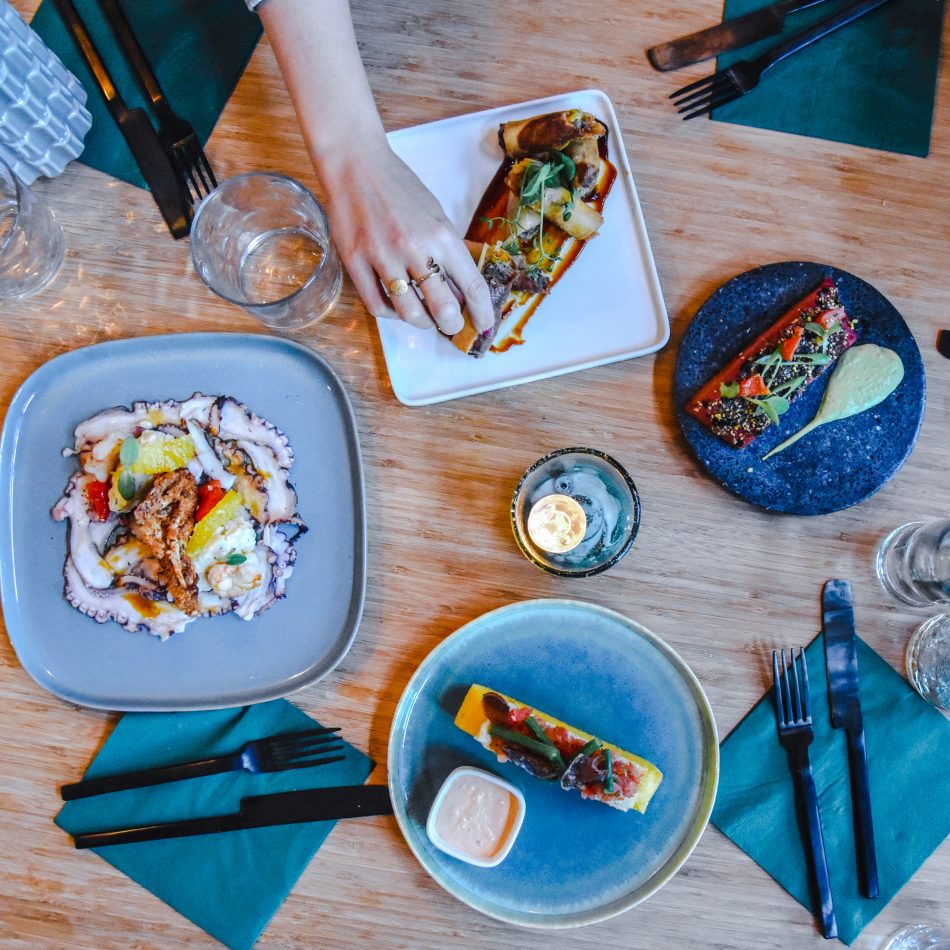 The Piushaven is one of the fastest developing areas in Tilburg. 10 Years ago you’d find hardly any restaurants here and now it’s a lively area with food options for any time of the day and for any mood. From freshly baked croissants for breakfast, to tasty vegetarian lunches, streetfood from all over the world, ice cream and artisan beers to close the evening.
Just like the Spoorzone, the Piushaven (‘Pius Harbour’) is changing rapidly. Many new restaurants have opened up at Tilburgs waterfront.
On this page I’m sharing a list of all restaurants in the Piushaven in Tilburg. I’ve listed them in location order, starting with the ones closest to the city center and ending with the ones close to nature area Moerenburg.

Burgemeester Jansen is probably the oldest establishment that’s still located at the Piushaven. They’ve been there since 2005, long before all the other restaurants joined in. It’s a bar that is specialized in artisan beers. They were already selling ‘speciaalbier’ before it got trendy. They have 22 beers on tap and over 100 beers by the bottle. You can also order some snacks or small lunch bites at Burgemeester Jansen.

Jaxx Marina has just opened up, you can find them next to Burgemeester Jansen where Heaven’s Kitchen used to be. Jaxx Marina has a beautiful interior, that is very Instagrammable! They’re open for lunch and dinner. Probably inspired by the harbor, owner Maarten Hoppenbrouwers created a Mediterranean menu. Inspired by France and with influences from Asia. On the lunch menu you’ll find salads, sandwiches, specialties and desserts. I went for this avocado toast with egg for my last lunch at Jaxx Marina.
For dinner their menu is divided in cold and hot starters and fish, meat and vegetarian. And of course they also have several desserts like cheesecake and pavlova.

You can find Restaurant Rak on the opposite side of the street, or actually almost on the opposite site of the water. Rak is located on a floating platform; only connected to land on one side. This means that if you’re having lunch or dinner at Rak; you’ll almost always have a view over the water. Don’t worry if you’re facing away from the water: the interior is beautiful to look at too. And if you watch closely you’ll also see patterns of waves in the interior!

Huize Geers is not a restaurant, but you can get some delicious food with them so I’ve added them to this list anyway. Huize Geer is a chocolatier. What makes them unique is that as one of the few chocolatiers in the Netherlands they make the entire product themselves; from bean to bar. You can visit their small store for some unique bonbons and they also serve delicious ice cream.

Eethuis Twintig is one of my personal favorite restaurants of Tilburg. I even took a group of food blogger there during the Food Blogger Tour I organized in 2018. Eethuis Twintig was started by 2 women, and now owned by the relatively young Thomas. They have an original menu with ingredients and combinations that you won’t find in many other restaurants in Tilburg. They’re open for lunch and dinner and have a rather large terrace for sunny days.

Bikken en Bakken is a bakery at the Piushaven, so you can go there for your breads, buns and pastries. But they also have a few tables inside and a big terrace where you can enjoy breakfast or lunch. Naturally, their menu items always include home-baked bread or buns.

According to many Shinzo Sushi is the best sushi restaurant of Tilburg. Try to get a table on the 1st floor, where the atmosphere is very nice. You wouldn’t even have the feeling that you’re in an ‘all-you-can-eat’ restaurant with the wooden roof and cosy illumination.

Club Jolie is located where tapas bar Don Curado used to be. On the menu of this totally restyled restaurant are dishes from all over the world. Mostly street-food but they have all kinds of dishes. Club Jolie is open for lunch and dinner, and they also have great bites for a nice ‘borrel’ with friend.

Stadsbrouwerij 013 is a beer brewery located at the Piushaven. Besides brewing beer they also have a restaurant where they serve delicious food. Some items on their menu are made with their beers, and all of them taste great with a beer of the brewery! The staff of the Stadsbrouwerij is wonderful, very friendly and knowledgeable.

Partyboat the Albatros, in the warer opposite Stadsbrouwerij 013, also belongs to them. It’s a great spot for a beer with friends.

At Boot013 you eat dinner (and lunch in the weekend) on a boat. The boat was previously used as a hair salon, and had been empty for a few years. With Boot013 it now has a new destination. Most of the dishes are prepared on their Big Green Egg, so they have a crispy barbecue flavor.

Harboury, located on a corner with a big terrace, is open for lunch, dinner and drinks. For lunch you can choose between 2, 3 or 4 courses and for dinner even up to 6 courses. They serve culinary classics like veal entrecote and lobster.

Porto is the spot in the Piushaven to go for an ice cream and a good cup of coffee. You can go for dinner at one of the restaurants and then have an ice cream for dessert at Porto. You can pick your flavors for a cone or a cup, or go for one of their ice cream sundaes. They also have a large list of coffee specialties for your caffein fix.

At restaurant Good Mood you can get a great lunch or dinner. They have quite an extensive menu so there’s something for everyone. For lunch they have several kinds of soups, salads and sandwiches. And if you can’t choose you can go for the ‘lunchplankje’, where you get a grilled cheese, sandwich and soup of your choice.
For dinner there are all kinds of fish, meat and vegetarian dishes like this vegetarian pasta. And make sure to leave some room for their chocolate cake; it’s probably the best in Tilburg.

De Visserij is from the same owners as De Burgerij in the ‘dwaalgebied’ in the city center of Tilburg. As the name suggests, they specialize in fish dishes at De Visserij. As I’m a vegetarian, this isn’t the restaurant for me but I heard great stories from fish lovers about their oysters.

Probably the most special ‘restaurant’ at the Piushaven is the so called Karvansara from Vittorio. Vittorio once flew from Iran and made Tilburg his new home. He’s one of the most hospitable people I’ve ever med. He created his own spot at the Piushaven next to the ‘draaibrug’. Here he created a living room with rugs and chairs. He sells delicious Persian ice cream but you’re also welcome if you just want to sit down and chat with the other guests.

Villa Pastorie is a restaurant in a beautiful old villa. They have a garden and a waterside terrace for sunny days and a warm restaurant for winter. They’re open for brunch, lunch and dinner. The owners, the couple Hanneke and Michel, stumbled upon the villa in 2012 and bought it to fulfill their dream. Besides a restaurant, Villa Pastorie is also a Bed & Breakfast. They have 4 different rooms for a unique stay in Tilburg.

Owner Yvette from Zoete Moed has her own counter in concept store Het Pastorielokaal. She makes her own peanut butter that she sells at Zoete Moed. But I’m sure you won’t leave with only a jar of peanut butter when you got to Zoete Moed and you see all the delicious cakes that Yvette made. What she has for sale varies every day but it’s always home-made! You can also order cakes for your Birthday or any other party.

Besides in the Piushaven, Tilburg has many other nice restaurants. Click here for all my food favorites in Tilburg.